New from Catalyst: a dark chocolate musical with a sweet tooth

Daniel Fong and the ensemble of Fortune Falls, the new Catalyst musical getting its Edmonton premiere. Photo by David Cooper.

Between the death of one dream and the what-comes-next is the unmapped territory where Fortune Falls, the latest musical creation from Catalyst Theatre, finds its footing.

After all, as Jonathan Christenson muses one morning last week, “dreams don’t vanish into thin air” — or even air textured with the kind of arctic 3-D ice crystals that make your eyes water. Dreams aren’t free-floating; they seek out new shapes, new vessels to contain them.

Christenson’s new five-actor chamber musical (co-written with Beth Graham) tells the story, chocolate-coated with a crunchy centre, of a candy town. When the Mercey chocolate factory that is not just the town’s biggest employer but its raison d’être, its defining identity in the world, the repository of its dreams, closes down, what then?

The mysterious, smudgy frontier between dreams and reality, memory and imagination, is Catalyst’s signature playground and aesthetic. Witness the fantastical visual imagery and stylized physicality of such original shows as Frankenstein, Hunchback, Nevermore, Vigilante. “I’m interested in dreams, imagination, in subverting the notion that there’s clear line between them and reality,” says Christenson. “I think theatre is the place to explore that…. We go into a dark place together: What could be closer to a collective dream?”

The story of a young man who gets a job guarding an empty chocolate factory is at the centre of Fortune Falls. Curiously, as Christenson reveals, the inspiration comes from real life.

CanCon doesn’t come quirkier than the story of Smiths Falls, Ontario. The moment Christenson found it, via a CBC Radio feature, he’d been struck by its oddities. “The Hershey company’s first chocolate factory outside Hershey, Pennsylvania, opened in Canada in the ’60s and closed its doors in the early 2000s.” It left in its wake, high and dry, “a depressed town that had once been a tourist destination.”

The factory stayed closed for eight years, until the Tweed Company bought half of it, to set up a medicinal marijuana operation. This unusual declension, chocolate to marijuana, had curb appeal in itself. And it spun other cross-border motifs, too, like the way we Canadians piggyback on the American Dream. When we get flung off, by forces beyond our control, what then? Canadian Dream, after all, isn’t a term in the common parlance.

“They leapt on the idea!” says Christenson, inveterate tinkerer, re-writer, re-thinker, brainstormer who heads a theatre company that tours internationally, and re-works its productions every time out. He sighs. “Interesting, quirky story” notwithstanding, “it didn’t happen for me. It’s maybe the hardest show I’ve ever tried to write. What was the central conflict? How would it play out? I couldn’t find it…. It was driving me insane.”

Enter playwright Beth Graham (The Gravitational Pull of Bernice Trimble), who’s been in the cast of such Catalyst hits as Nevermore, herself. “We have a great creative dialogue,” says Christenson of their collaboration on the script. “We nicknamed Beth The Disruptor. I needed someone to shake up the whole process.”

As always with Catalyst, the visual imagery, the stylized physicality, the music, emerged simultaneously with the script. It was no wispy creation, to put it mildly. In Fortune Falls’ first incarnation, day one of rehearsals, there were 45 characters for five (very busy) actors to play. “We’d developed slice-of-life scenes where you’d get glimpses into the characters in the town, all intercut by the journey of the central figure.” Young Everett Liddleton lands a job as security guard at the empty (factory) site; he imagines, assumes, that it’s about to re-open.

The music, of the synth pop stripe and delivered digitally, was big too: Fortune Falls was underscored beginning to end, and there were “actual songs.” It lasted 3 1/2 hours.

In Calgary, two hours and 25 characters got the chop. So did the theatrical survey of the townsfolk, Christenson reports. And though the founder of the Mercey chocolate company, Milton Emerson Mercey (deceased), is unmistakably American, “the idea of the American Dream that I’d originally found so compelling fell by the way,” says Christenson.

In the version of Fortune Falls we’ll see on the Citadel’s Maclab stage, Catalyst’s new home, more characters have exited from the production. Now, says Christenson, it’s focused on the journey of young Everett (Daniel Fong) “who walks into the empty Mersey chocolate factory with a dream he’s inherited, a job where everyone in town aspired to have one,” as Christenson describes it. “The town has defined itself by the factory…. Then, there’s a period of nothing.” That transitional time is where Fortune Falls takes us.

Christenson, an artist of philosophical bent and wide cultural interests, is thinking about the early capitalists. “Hershey, like Coca-Cola or Ford, isn’t just a massive employer, it’s a vessel that holds dreams of what America aspires to be.” Ingenuity, momentum into the future, delight: the American way forward.

“Originally,” says Christenson, “there was a contract between the workers and the late 19th early 20th century industrialists who envisioned their responsibility to their workers. They saw themselves in a paternalistic way…. Hershey built a whole company town: houses, schools, hospitals….”

“Their successors focussed exclusively on profit, on shareholders at the expense of the workers and, I would argue, the communities in which they found themselves.”

Everett, the central character of Fortune Falls, is the younger generation whose parents got laid off when the factory closed. “The dream is in its death throes maybe, but still tangible.” 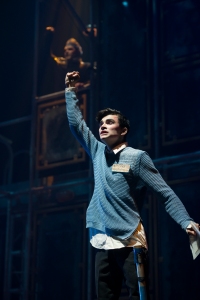 Says Christenson, “it’s something everyone goes through, at the end of one dream, what comes next? How do I re-frame what my life has been, what my dreams have been?”

Take journalism, says Christenson by way of immediate example. “You dream of being a journalist, and that’s connected to an idea of what you can do as a writer, in the world…. But now, newspapers are dying. There’s nothing to legitimize that choice, no vessel to hold those dreams any more.” He sighs. “It’s a strange time…. How do I build a new dream? What do I need to hold it?”

The Brexit vote and the Trump election — which had just happened when Christenson and Graham started re-writes — don’t exactly de-rail this train of thought. Au contraire. Fortune Falls feels immediate and urgent to Christenson, more than ever. He shakes his head, and muses. “We’re in a period of grief. We’ve lost our notion of what the world could be. We know better, but we’ve (actually) chosen to go backwards…. Amidst a huge sense of disenfranchisement, of disempowerment, people are clutching at notions of what they knew. The dream has died. Actually, it died a long time ago but it kept going as if it were alive… Americans need to believe in the idea of America’s greatness — so powerfully they can’t see the truth.”

“There are two options, going back to what we knew or stepping into the unknown. And there’s nothing scarier than that.”

The new version of Fortune Falls wraps itself around that thought, Christenson thinks. “A lot has changed since Calgary,” he says. Everett “thinks he’s been hired for the re-opening of the factory…. His need is so great his perception has become distorted.”

“Our story is now, increasingly, about the journey to be confronted with the truth, and what you do with it when the truth feels unmanageable.”

“Do you retreat? Despair? Or do you move forward with hope?”

This entry was posted in Previews. Bookmark the permalink.
Loading Comments...