A problematic play for a troubled time: a joint Henry V reviewed 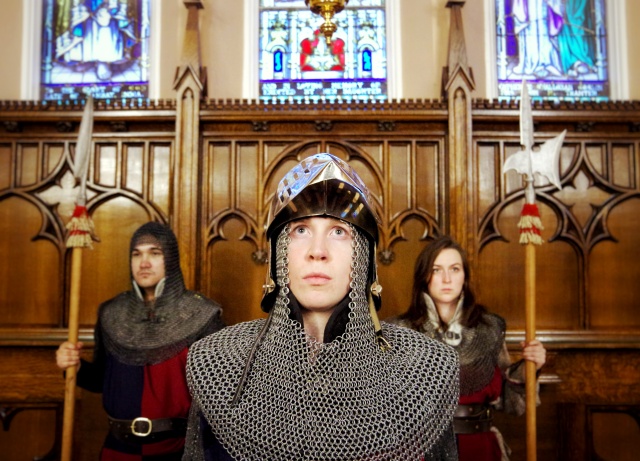 It begins with incense and music, the flicker of light through stained glass, and a funeral procession.

It gives you a little shiver to realize that the star monarch of Henry V is already dead —  “too famous to live long,” as we’re told in in a eulogy to him borrowed from another Shakespeare play, Henry VI Part One. Time and history have already moved on.

It’s a perspective on perspective. And it frames the military battles, sacrifice, quest for national glory, and cult of heroism that are up for our perusal in this problematic play. It’s also one way Benjamin Blyth’s production of Henry V, a collaboration between his London-based Malachite Theatre and Edmonton’s enterprising Grindstone Theatre, accommodates itself to an atmospheric venue, Holy Trinity Anglican Church.

It’s by no means a wooden O, as the Chorus references the Globe Theatre in the celebrated call to the imagination in the Henry V prologue. “O, for a muse of fire….” But the church’s arched wooden vault and arches, and moody lighting, are nothing if not conducive to thoughts of mortality and legacy.

And so is Blyth’s choice to have four actors,  — representing both French and English forces in the play, step forward at the outset to alternate lines as the Chorus. War, like history, is a matter of  point of view.

At the centre of the production, whose 14-actor cast is equally divided between men and women, is this country’s first female Henry V. Brynn Linsey, a newcomer to Edmonton theatre, strides impressively into the role, strong-voiced and vigorous. From the start, we see a Henry ready to command, a man of action a little impatient with all the clerical dithering about Salish law and whether a decently plausible moral/political claim for going to war can be made. Yes? Right then. Let’s get on it.

Interestingly, it’s a performance that isn’t about bringing “womanly” qualities to a traditionally male role. It relies more on forceful leadership and decisiveness than assuming male bravado. Until much later in the evening it’s not, though, a performance much nuanced by either humour or rueful self-reflective memories of the wild youth we remember hanging out with Falstaff.

Henry generally seems to be on a short fuse. The mockery of the French, a gift of tennis balls from the Dauphin referencing Henry’s  profligate Prince Hal youth, makes him mad. The traitors he sends to their deaths make him mad. His hair-curling threats to the besieged burghers of Harfleur seem to come from furious intent. The political necessity to execute his old pal Bardolph doesn’t seem to affect him much.

By contrast this hot-headed quality makes Henry’s demeanour on the eve of Agincourt — when it seems likely the English will lose, big time — intriguingly thoughtful. As Linsey’s performance proposes, Henry seems to have discovered, gradually, something about the terrible responsibilities of leadership. And his awkwardness in the courtship scene with the French princess (charmingly played by Danielle LaRose) is endearing.

The scenes with Pistol (Blyth) and the Hostess ( LaRose), Nym (Caitlin Goruk) and Bardolph (Alyson Dicey), seem amusingly chaotic, full of swagger and rueful laughter on the subject of the heroic.

The performances are, in truth, variable, in this ambitious (and welcome) enterprise for emerging artists. Will you be able to distinguish the Dauphin as a character, for example? Maybe not. Ditto the individualized English and French nobility — though that’s partly the thrust of a production that, unlike frequent practice, doesn’t make the latter preening fools who deserve what they get.

Partly, the problem is audibility. The echoing space is very hospitable to the kind of period polyphony that filters through LaRose’s musical score (played live on a raucous assortment of instruments, next to the coffin). Its resonances are quite a bit less hospitable to voices that trail off, or chatter away in accents that wander, or just don’t project. And there are quite a few of those.

Stand-outs in the ensemble include Evan Hall, who delivers in a way that’s always intelligible, and  Byron Martin. Brann Munro, though not invariably audible, is sharply funny as the farcical martinet Captain Fluellen.

And the battle scenes, whose urgency is enhanced by forward motion from the rear of the church towards the “upstage” coffin, do capture a sense of danger in individual encounters (fight director: Samantha Jeffery). Blyth uses the entire space, including the aisles, to convey a sense of perpetual motion. When it works, you feel surrounded; when it doesn’t you feel that everyone is rushing breathlessly on the way to someplace else for reasons you can’t quite make out.

In an age when countries seem to be circling the wagons around the idea of nationhood, Henry V has a particularly thorny appeal. Here, the joint efforts of two theatre companies to make its provocations multi-sided make for a lively evening.

This entry was posted in Reviews. Bookmark the permalink.
Loading Comments...