If you go out in the woods tonight….

It’s a strange form of civic enchantment. Every year about this time, the good burghers of Edmonton, thousands of them, find themselves irresistibly drawn to follow a trail of light and music through the a snowy ravine at night.

They sing and dance in Mill Creek Ravine by the light of cunningly wrought light sources, in a stunning series of installations. They arrive at a First Nations Camp, and learn drumming from the experts. They find themselves doing jigs and reels with the Dave Cunningham Family Band at the Métis Camp — or making bannock. They meet up with a French-Canadian storyteller/musician (Roger Dallaire) in a Trapper’s Cabin.

It’s Flying Canoë Volante, the five-year-old winter festival where our three founding cultural traditions, First Nations, Métis, and French-Canadian, meet to play in the snow. Then everyone ascends to a city of light — a.k.a. La Cité francophone, the elegant curvilinear French cultural centre — to continue the party, indoors and out-, in a mixture of languages (and beverages).

And the people love it. Daniel Cournoyer, La Cité francophone’s amiable, and supremely bilingual, executive director, reports that in the five years since Flying Canoe became the heir to the defunct Winter Light Festival, attendance has grown from 3,000 to 30,000 last time out. And Cournoyer has enhanced the festivities by partnering with other festivals, Rubaboo for example, and Native Counselling Services.

Illuminating a dark ravine without a power source is no task for conventional thinkers. Flying Canoë Volante‘s ingenious lighting whiz Dylan Toymaker, has assembled 11 artists to create light installations along the snowy way, with contributions by theatre designer Marissa Kochanski and a variety of actors.

The adventures even have a narrative, and it’s an alluringly eerie one. The flying canoe, in different variations, is part of both French-Canadian and First Nations tradition. The 19th century legend recorded by Honoré Beaugrand — “a great piece of French-Canadian literature” as Cournoyer puts it — stars voyageurs who make a deal with the Devil to fly them home to their sweethearts on New Year’s Eve. One catch: they can’t drink or swear or crash into church steeples. Ooops, they do all of the above. “They made a deal, and they suffered the consequences,” laughs Cournoyer. 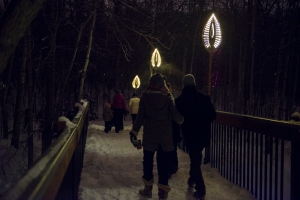 The 2016 edition of the festival. Photo by Flying Canoë Volant

Cournoyer loves the festival’s “fusion of francophone and indigenous cultural traditions, a pow-wow of talent!” And Flying Canoë Volant isn’t a spectator sport. “I don’t want you to come here and just watch!” declares Cournoyer, with his usual exuberance. “I want people to partake. I’ve encouraged all our partners to engage the audience, to have interaction!”

Out in the hall, it’s a cabaret, with three bands — one indigenous, one francophone, one anglo-Canadian — each night. There’s outdoor DJ-ed entertainment in the basin that the building encloses. And there’s “a big old dance party” at the end of Saturday night’s festivities, too.

“In the five years we’ve been doing it, I’ve learned so much,” says Cournoyer feelingly. “The partnerships! The knowledge I’ve gained! The cultures are so rich!”

The idea is “to create dialogue (between cultures) without imposing it. That’s what happens when you engage people…. It’s a journey of discovery.”