Kinky Boots the musical on tour: the blue collar gets sequins. A review 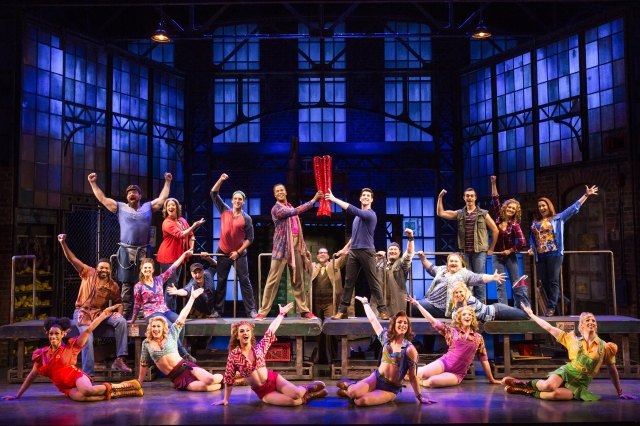 Touring in high heels: who does that?

There’s a highlight moment in Kinky Boots, the feel-good Broadway touring hit currently drilling its stilettos into the Jube stage, when everything about the 2013 Cyndi Lauper/ Harvey Fierstein musical seems to land lightly, with ingenious originality.

It has the fizziest, catchiest number in pop queen Lauper’s score, for one thing. Lola, the drag queen who’s become the unlikeliest of business angels for a failing family-owned shoe factory in a blue-colour northern English town, is giving a niche-market footwear tutorial, in song. Forget sensible footwear, she tells us; Sex Is In The Heel (“seduction at the thigh/ the heel is the transmission”).

And then, as the glam new boots come off the assembly line conveyor belt, so, in a variety of configurations, do drag queens and factory workers, tumbling and somersaulting. Jerry Mitchell’s choreography never stops being fun.

J. Harrison Ghee’s husky-voiced larger-than-life Lola, whose supply of stage presence cries out for the special-occasion term ‘fabulosity’, presides with gusto over the scene. And even her blandly conservative counterpart Charlie (Curt Hansen) seems captivated by possibility.

Anyhow, to return to the story, borrowed from real life and a 2005 Brit film seen by a select few…. Charlie Price, who’s resisted his father’s wishes in the matter, has inherited the ailing family factory, to his own dismay and that of his upwardly-mobile fiancée. A chance meeting with Lola, and voilà, a business plan to turn make thigh-high boots — “two-and-a-half feet of irresistible tubular sex!” as Lola puts it in her understated way — for an untapped niche market of cross-dressers.

As per the blue-collar into no-collar empowerment of The Full Monty or the gender stereotypes plié-ed off the stage in Billy Elliott, this involves the arrival of new ideas, the overcoming of prejudice, the validation of individuality and tolerance. In the course of it, two men of wildly different sensibilities will find that they’re not so different after all; they find common cause in relationships with disapproving fathers, as we learn in the touching shared song Not My Father’s Son.

It’s a funny old world. What felt just a wee bit dated in 2013 when Kinky Boots first high-kicked its feel-good manifesto of individuality, self-acceptance, and tolerance, feels fresher and livelier, and needed!, again. Times being what they are, as the world spins backwards.

Ghee, as I’ve said, turns in a captivating, funny, dimensional performance as Lola. When Charlie says, in an apologetic phone message to her later in the show, that “whenever you leave a room there’s always a great big gaping hole,” he isn’t kidding.

A rather lacklustre performance from Hansen reveals the intensity and musical chops for quivering rock numbers, like Soul of a Man, it’s much less convincing when the character is speaking. When Charlie isn’t singing, he doesn’t quite exist. And a wandering accent doesn’t assist with this.

As the quirky factory assistant with a crush on Charlie, Rose Hemingway is droll and touching. Actually, it’s a performance as the reluctantly lovestruck Lauren that gives very funny tangible physical form to the phrase “despite one’s better judgment.” And her number The History of Wrong Guys, vintage Lauper, is a highlight.

Among performances from a cast of appealingly diverse size and shape, Aaron Walpole as the swaggering brute Don and Jim J. Bullock’s George stand out. The rest aren’t terribly well differentiated, in truth, which squanders one of Kinky Boots’ strengths.

This handsomely appointed touring version happens on much the same set as the original Broadway production, a gloomy Victorian-age brick factory (designer: David Rockwell) that becomes dive clubs or down-market bars as required. It’s lit with smoking shafts of factory light, and continuing inventiveness thereafter, by Kenneth Posner. And the show is trucking around Gregg Barnes’ splendidly flamboyant costumes and a supply of boots that never ceases to impress. Even the sound, so often anonymously tinny at the outset in touring shows at the Jube, seems better than usual.

Defaults in the accent department notwithstanding, more noticeable in Act II since there’s more talking, Kinky Boots propels you along to a heart-hugging ending, and a rousingly contagious finale about elevation, both of heel and of mood. “We’ll light you up like a live wire,” goes the song. The opening night audience couldn’t have agreed more.

Directed and choreographed by: Jerry Mitchell

RELATED:
Putting the (Kinky) boot in: the musical arrives with a message

This entry was posted in Reviews. Bookmark the permalink.