Panache: the Ponce is back for Pt. Deux of Firefly’s circus satire 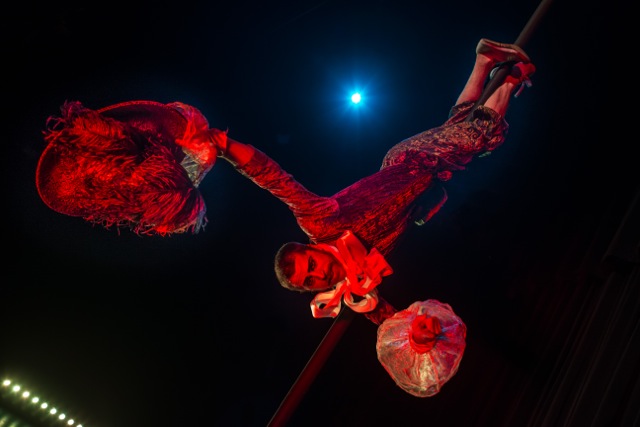 There never would have been a sequel if the unthinkable hadn’t happened.

When last we met Ponce de Ponce de Panache, 12 months ago,  it was at a pep rally for the self-glorifying blusterer and king of hyperbolic claims, preposterous entitlement, and alternative facts. As Firefly Theatre and Circus Arts artistic director Annie Dugan put it at the time, the high-flying Ponce was a cross between a certain presidential candidate and Louis XIV. And the Firefly satire and circus fusion, Panache, was a cross-hatching of “Versailles, The Hunger Games, and the current political climate in the U.S.”

“Who could have guessed he would win!” declares Dugan. “We never thought we’d be doing a Part Deux; it was never part of the plan…. We’d already started planning a show around a Christmas Carol skeleton,” she says of early brainstorming meetings with collaborators John Ullyatt and Belinda Cornish.

“But after one week in office, what Trump was doing was too horrible!” In that thought was born the sequel, Panache Part Deux, opening Friday at — which is to say on and above the stage at — La Cité francophone.

Satire is tricky, and outrage is barely sustainable in an age when reality trumps it every time, as Alex Baldwin has admitted on the subject of his sensationally grotesque Saturday Night Live alter-ego. “It’s too awful to parody what Trump is doing, so we’re doing how,” says Dugan.

The Ponce has triumphed. He’s now Supreme Leader of La Cité. Last year, at the pep rally edition of Panache, “the audience was complicit,” as she says of our applause, cued by signs held up by a trio of “minions.”

This year, our complicity continues, since we’re cast as Congress. “This is a day in the life,” Dugan explains. “We’ve turned the how-to of governing into a game show.”  All the circus performers are the Ponce’s cabinet ministers, “his smoke screen, his diversionary tactics,” she says. “A politician surrounds himself with his friends. The ‘former Miss South Africa’, for example, is the Secretary of Mining and Resources…. All the women are ‘former Miss Somethings’.”

Since Part Deux is a game show, the lavish world of circus is juxtaposed to the contestants, “three normal people with normal needs, petitioners in the Ponce’s court: a gentleman who needs a hip replacement for his grandmother, a women looking for a bus pass, a guy who’s been arrested for jaywalking and wants a get-out-of-jail pass.”

Director Dugan has enlisted a trio of Edmonton heavy-hitter actors: Dave Horak, Shannon Blanchet, and Mat Busby to be the supplicants. Cornish is the dramaturge on the project.

For the rest, the core group of Panache performers is returning for the sequel, led by San Francisco’s Ross Travis, an acrobat/actor who specializes in the most punishing of aerial arts, the Chinese pole. Dugan has one word for it: “painful!” This year the pole isn’t planted on the stage; it flies, which sounds impossible.

Lyne Gosselin (trapeze with silks) and Mackenzie Baert (rhythmic contortion) are back. So is the ever-inventive musician Jason Kodie, who plays keyboards live. And the magician/illusionist Billy Kidd (Gia Felicitas) returns from her home base in the U.K. Last year, she concocted an act especially for Panache. And it was a showstopper. As a  set-up for Marie Antoinette’s famous line “let ‘em eat cake” she actually baked a cake in someone’s hat. 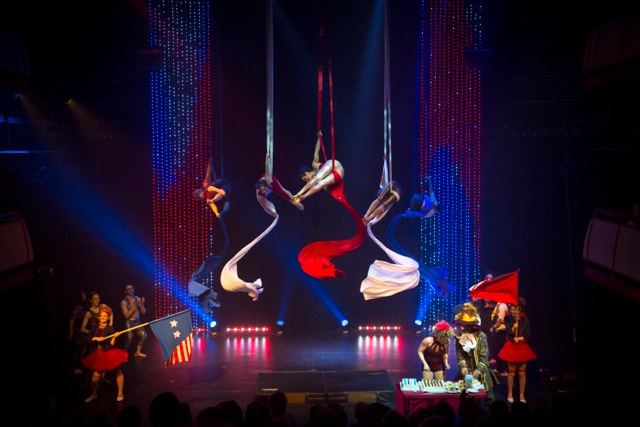 The latter’s act “involves a plastic bubble,” laughs Dugan. “Plastic bubbles for all are how Ponce plans to combat climate change he doesn’t believe in.”

“I don’t usually do political satire,” says Dugan. “ I like stupid comedy. I’m happy to do things with chickens. And peanut butter.”

“This year the whole show is a little bit darker. And it needs to be.”

Panache Pt. Deux: The Triumph of the Ponce