The Fall of the House of Atreus: fun and games with Greek tragedy 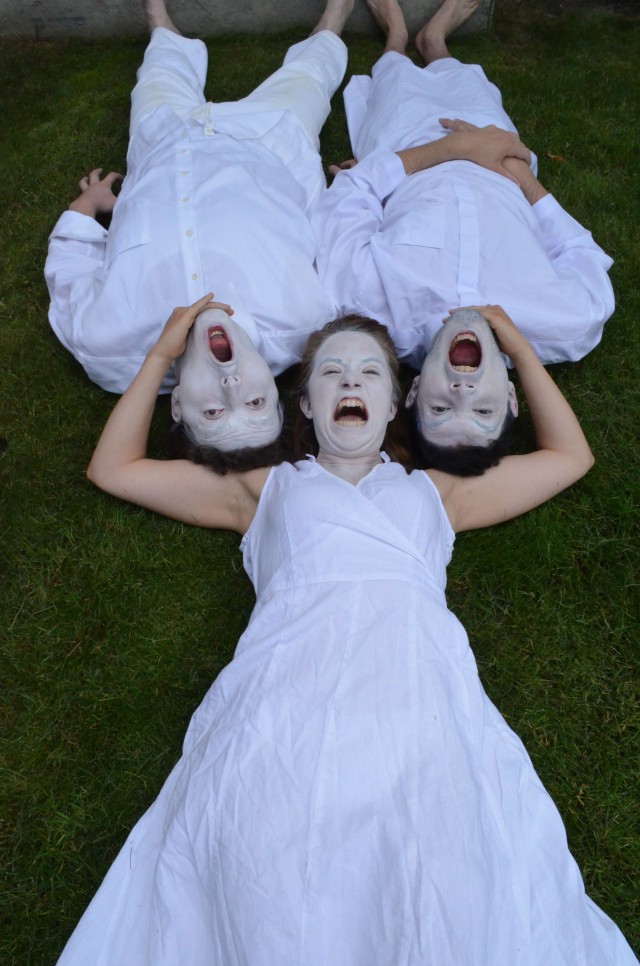 Morgan Grau, Sarah Feutl, Graham Mothersill as the Furies in The Fall of the House of Atreus. Photo supplied.

“It’s either the highest of the lowbrow or the lowest of the highbrow. One or the other!” declares playwright Jessy Arden cheerily of The Fall of the House of Atreus, the high-speed, gleefully murderous 60-minute comic extravaganza she’s fashioned from Greek mythology.

Poisoning, strangling, backstabbing, usurpation, incest, cannibalism.… The gore-spattered five-generation epic cycle of the family that has pretty much nailed down dysfunction for all time is a generous vein of possibilities. And, lord, what these House of Atreus people can do with a grudge! You don’t have to be a Greek scholar to be impressed by the sheer creative permutations.

The Impossible Mongoose production directed by Corben Kushneryk dazzled small but enthusiastic audiences who ventured into a slightly off-centre Fringe venue in an ex-church last summer. There was lots of repeat business. It’s back this week, in collaboration with Blarney Productions, re-tuned for a run in a real theatre (The Backstage).

Arden and Kushneryk have added a scene or two (“the judgment of Paris is in!”), subtracted others. And Kushneryk has ramped up his striking chalky white-on-white design and reassembled the same agile trio of actors and rowdy ensemble of sock-puppets. “It’s not your great great great great grandmother’s Greek theatre,” grins Kushneryk. “A lot of murder in 60 minutes!” And not, I need hardly add, a lot of sitting around being mopey.

“People always ask me what part’s from Greek tragedy and what I made up,” laughs Ardern. “The most bizarre, the most outlandish (plot developments) are the truest to mythology.”

There are touchstones for us in the lurid tale of vengeful relatives and step-relatives. Clytemnestra stabbing her hubby Agamemnon to death in the bathtub: that rings a bell with everyone. Ditto Helen of Troy or the Trojan Horse. But How many of you (hands up! know about Princess Hippodamia? “She’s not one who got passed down by movies,” shrugs Kushneryk.

“What makes it so appealing,” thinks Ardern, “is the way it loops: we don’t learn from history. This is the story of five generations who continue to make the same mistakes.”

Morgan Grau, Graham Mothersill, Sarah Feutl as the Furies in The Fall of the House of Atreus. Photo supplied.

As the writer and director explain, the show we’ll see at the Backstage is the third iteration of a production that began life in 35-minute form at the Thousand Faces Festival, devoted to the mythic in theatre, a couple of years ago. “The visual language of the play has evolved since that first workshop,” says Kushneryk. “We were throwing spaghetti at the wall and seeing what stuck…. We’ve let it grow as it needs to.”

He and Arden met as student actors at the University of Alberta theatre school. In one way, they’re a study in contrasts. He’s steeped in musical theatre; he arrived at the U of A with a MacEwan degree and a history of directing “weird little boutique musicals,” like Coraline which played the Fringe. She arrived in Edmonton from seven years with a Winnipeg indie theatre, The Struts and Frets Players, devoted to productions based on mythology. “And this is our horrible Greek baby!” smiles Kushneryk.

Even before they graduated with fine arts degrees from the U of A last spring, they had hatched theatre together three times as a writer/director team. Kushneryk directed Arden’s “living room satire” Harold and Vivien Entertain Guests, which he describes as “Who’s Afraid of Virginia Woolf? as if it were written by Christopher Durang.”

“We share an odd sense of humour,” smiles Kushneryk. “Demented!” says Arden, who amends to “small-a absurdist… We have a very collaborative relationship; the play is just a blueprint!”

“Some moments are script moments; some are director moments,” she says. “And a lot of credit goes to the actors.”

Kushneryk says he started with signature features of Greek theatre, the masks, the declamatory style of speech, and the chorus. “The fun is to see the deviations!” he says. The chorus here consists of the Furies, back from hell to educate humanity …. The three are trying to put on what they think we want, a Greek play.”  And, hey, they get a song, thanks to Kushneryk’s musical theatre bent.

After The Fall of the House of Atreus, Impossible Mongoose’s first collaboration with Blarney, Kushneryk goes into rehearsal at the Mayfield; he’s in Jesus Christ, Superstar. And Arden is in a university production of the brainiac Michael Frayn play Copenhagen.

But Impossible Mongoose, the indie founded by Kushneryk and Arden with Kristen Papayas, will be back. “We’re keeping our eyes out for the little weird things,” says Kushneryk. “We also love to create and get our hands dirty.”

“Zeus-ical the Musical?” laughs Arden. “The show no one asked for?”

The Fall of the House of Atreus