But is it Art? three guys sitting around discussing a painting at Shadow Theatre

The play under discussion is Art, the elegantly minimalist 1994 play by Parisian actor/playwright Yasmin Reza that’s the finale to Shadow Theatre’s 25th anniversary season. The three guys discussing it are the actors in John Hudson’s production. And the room? They’re hanging out in the hospitably appointed new green room at the new Varscona Theatre  — “same ambience! without the smell!” as Glenn Nelson gracefully puts it. There is no argument about this.

There is, however, about the painting. It’s a bone of contention for the three old friends in Art and it’s an intriguing point of departure for veteran stage actors who are used to contradictory responses — it’s dreck! it’s a masterpiece! — to every play they’ve ever been in. “It’s wonderful, amazing, great, to do a play that’s so well-written,” says John Sproule, to general assent and a rueful group sigh. They’re remembering plays they’ve been in where those adjectives would just not apply. In a million years.

The painting in Art is a big-ticket piece of modern art, a white-on-white painting by someone famous that bends the geometry of a three-way male friendship to the breaking point. 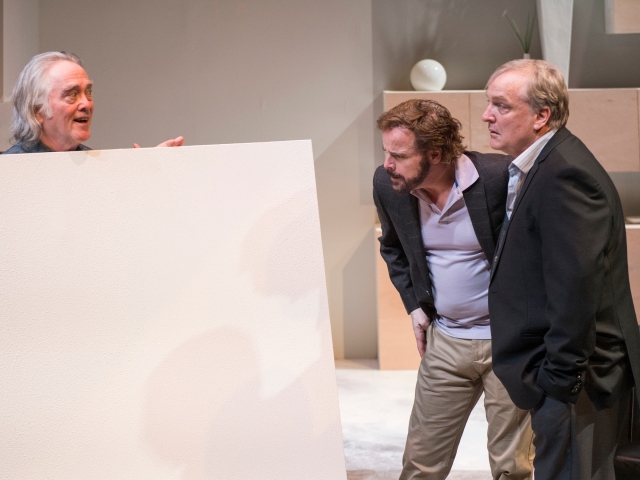 Serge (Nelson) is the successful dermatologist who’s just shelled out big-time for it. His friend Marc (John Sproule), an engineer, is outraged, by the painting, the price, the implications. And Yvan (Frank Zotter), — who’s about to get married to someone both his friends hate — is the conciliatory type who’s constantly getting caught in the middle, and then getting accused of being wishy-washy.

“I’m their punching bag,” grins Zotter. “I go home and cry quite often…. In fact, I could cry right here, but then they’d win.”

Art was written originally in French, translated by the British playwright Christopher Hampton. ‘Blanc’ is funnier than ‘white’,” laughs Sproule. And begtween ‘merde’ and ‘shit’, “merde is much the funnier word,” adds Nelson.

It’s by escalations like that the argument in Art becomes, as Sproule puts it, “inherently personal…. Someone who’d buy that painting isn’t the Serge Marc thought he knew. It’s a personal affront.” Nelson nods. “Art is about friendship. The painting is a character in the play.”

Sproule is a big Reza fan; he was in a Shadow production of Reza’s The Unexpected Man in the early 2000s. And he’s struck by the way she “can create comic suspense from ordinary circumstances.” In Art, it’s the tension of watching a play about a painting become a play about friendship, and you think “O my gawd, the trains are heading toward each other.…” Zotter agrees. “It feels like inevitability.”

“It’s all about keeping the love, and it puts Yvan into a terrible position of having to choose between his friends…. These guys are like two dads to me,” Zotter says of the character he plays. “And they’re destroying the most important relationship in my life. It’s like being a kid and seeing your parents fighting.”

The “discussion” in Art devolves into “funny, petty arguments about each other’s sincerity,” as Sproule puts it. “And they realize it’s petty,” says Nelson. “They realize it’s just a painting; ‘why are we fighting?’”

“So often when you do a comedy, you talk about whether this or that is funny,” says Nelson who has spent the last weeks rushing between Art rehearsals and performances of Peter and the Starcatcher at the Citadel. With Art, “we’ve never once talked about the comedy of it. I don’t even think about it. These guys are beyond serious….”

As for the painting, “I’ve never been in a play where a prop set piece has mattered so much!” laughs Zotter, fresh from a run of Mary Vingo’s Refuge at the Firehall in Vancouver. Next year he’s “the guinea pig” in a new master’s degree program in acting at U.B.C.

The contentious canvas has been painted by designer C.M. Zuby to have a pebbly surface, so the characters might, as per the play, plausibly find threads of other colours in it (Serge makes a case for red).

Does Serge really love the painting? Nelson thinks he does. Does he love it because the painter is a big deal, along with the price tag? Hmm. “What is truth?” says Nelson. “The harder you work on it, the harder it is to answer that….”

Running: Thursday through May 14