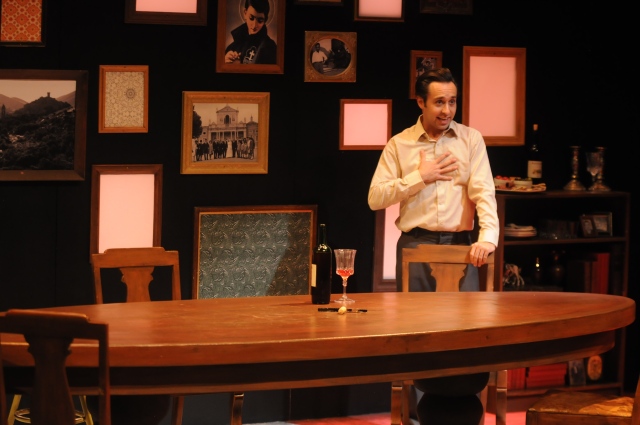 The centrepiece of Made In Italy is a long wooden dining room table.

In the course of the funny, touching, many-character solo play by Farren Timoteo, its agile creator and star will sit behind it and also answer the riddling age-old question ‘how can one man be said to sit around a table?’. He will sing and dance on it, lift weights on it, catapult off it, open bottles of wine on it, bring course after course of signature Italian dishes to it, create an entire family of characters around it. Single-handedly.

It’s not just a piece of furniture, as old Salvatore, the father, tells us at the outset, from his dining room stronghold (designer: Cory Sincennes). It’s the heart of the house, a symbol of everything that’s right about being Italian. Isn’t there something irresistible about a convivial, flavourful culture that sings its songs, discusses its issues, resolves its problems, makes its plans, together over great food and wine?

You know this, my pasta-seeking friends. Playwright Timoteo knows this (since he’s drawing on his own family experiences and structuring his play as a series of courses). Salvatore Mantini, transplanted Italian in Jasper, Alberta, knows this. Salvatore’s brother and their wives and assorted Mantinis  on both sides of the Atlantic know this. Salvatore’s unhappy teenage son Francesco, however, just wants to fit in, to disappear into the great Canadian homogeneity instead of being bullied by it.

And when there are sausages hanging from the front porch, bocce balls all over the lawn, and red wine-making stains on the driveway, this seems to be impossible. Francesco remembers his six-year-old self, opening his eyes to the reality of being different. “It was the single worst day of my life!”

The tensions built into the immigrant experience, between the first and second generations — the familial expectations of the first and the guilt-making departures of the second — escalate in the coming-of-age story that unfolds, course by course, aperitivo to dolce, in Made In Italy. It’s not easy to be the only Italians in Jasper, Alberta in the 1960s and 1970s. The epithets lanced your way are harsh; you’re very apt to get your ass kicked when your dad makes you wear a suit to school.

Whazza matter your head?” cries Francesco’s perplexed dad as his outcast kid starts “getting into trouble” at school. “I get mad to him,” Salvatore tells us. His constant refrain is “How come I take the boat across the ocean?! This is why we come to Canada?”

It’s a warm-hearted show; Timoteo has large affection for both father and son. That both characters on which his story is strung are played by the same protean actor, gives a certain resonance, a fine-tuned humour/heartbreak blend, to the notion of  family: Francesco in the end is his father’s son. That all the other characters, cocky cousins and sidekicks, idiosyncratic uncles, lugubrious aunties, exotic Italian sirens in the homeland, are created by the same virtuoso actor, in staccato scenes — even, impossibly, at the same dinner party — is a major part of the fun, in Daryl Cloran’s production. 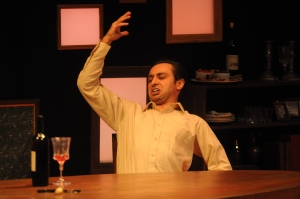 It’s a bravura performance from a startlingly multi-talented playwright/ actor/ singer and — as we see before our very eyes in very funny scenes choreographed by Laura Krewski — acrobatic contortionist dancer. The vocal and physical transformations, sometimes happening mid-sentence, are hilariously precise. And, in Cloran’s rhythmic production, they’re paced to accelerate.

Francesco is prepared to consult with St. Gabriel, according to him one of the Italian saints “who doesn’t exist just for swearing.”

But redemption from a terminal disaffection with everything Italian comes not from saintly counsel, but the inspiration of one man: Rocky Balboa, the Italian stallion. And there’s disco, and John Travolta, as Timoteo sets forth in riotous scenes of preening self-improvement. Time invested in good hair is never wasted, he explains, and demonstrates in one of the show’s funniest scenes.

As for the venue, the Citadel Club, there is something exactly right about hoisting a glass of wine in the company of the charismatic twinkly old fellow who’s hoisting one in yours. Capiche?

Written by and starring: Farren Timoteo

Running: now through May 7