Two people, 6 guns, a lot of music: meet the young stars of Bonnie and Clyde 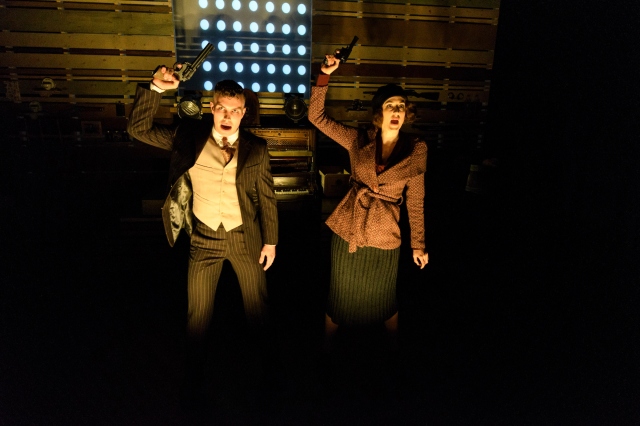 We know them as historical celebrities, the bank robber stars of a Depression Era crime spree who made a spectacular exit from the world in a bullet-riddled Ford in 1934.

But in the “two person six-gun” bank musical that gets its Canadian premiere Friday at Northern Light Theatre, we’ll see Bonnie Parker and Clyde Barrow from another angle:  the personal one. Bonnie & Clyde, by the American team of Will Pomerantz, Andrew Herron, and Doug Ritchie, lives behind the sensational headlines.

“Who were they? How did they get together? Why? The show takes time to focus on the people,” says Amanda Neufeld, who co-stars with Matthew Lindholm in Trevor Schmidt’s production.“This isn’t the archetypal surfaces of the story,” she says of the musical. “This is finding the truth in the gaps between the (documented) historical moments…. That’s fun, creating those in-betweens.”

On a break from rehearsal last week, Neufeld and Lindholm are musing on the dynamic of difference, and attraction, between the two characters history has assigned the single notorious label Bonnie and Clyde. “Clyde’s the career criminal, just out of prison, always in trouble with the law as he grew up,” says Lindholm. “He’s pretty damaged; I feel sorry for him, stuck in this pattern, trying to make it work….”

“Bonnie’s the popular kid in school,” says Neufeld, “the one everyone says ‘you’re gonna go places’….” After that, like so many popular kids going places, her prospects faltered. “She married young, a toxic relationship, and he dumped her….”

“In the Depression Era, options are not endless. She had a desperate desire to be more than who she was. And Clyde brings (with him) the sense of possibility, the possibility of fame and glory…. It’s a perfect storm.”

And speaking as we are of perfect storms, Bonnie & Clyde is something of the sort for two complementary talents: a musical theatre triple-threat and a singer-songwriter who first met seven years ago when Neufeld, a 2008 Grant MacEwan grad of apparently limitless DIY creativity, recruited him for her Rocky Horror Show.

The indie company was Neufeld’s Patient Mango Theatre. And Rocky Horror was Lindholm’s “first musical ever,” he says cheerfully. “A fresh kill for theatre!” laughs the exuberant Neufeld.

Lindholm’s musical theatre debut was in the ‘go big or go home’ mode — a starring role as the guileless, wholesome Brad who finds himself, one dark and stormy night, doing the time warp again with his girlfriend in the stronghold of Dr. Frank N Furter. It was a departure for the affable Lindholm, “more into fine art and drawing than theatre as a kid.”

Since that rocking affair at Dr. Frank N Furter’s place, the Edmonton native has moved to Toronto, where he records, produces and performs original musical under the name Mow Mow. (You can hear songs from his new album Bad Memories on Spotify and ITunes). But Neufeld has lured him back to his home town for such Fringe hits as Hair, BARE, Reefer Madness, and more recently, Bat Boy The Musical.

Last seen by Edmonton audiences in the Schmidt/Darrin Hagen musical Klonkdykes at Theatre Network, Neufeld says she’d “picked up the directing bug” from her high school years at Scona, under Linette Smith’s mentorship. “I had no directing experience except little projects,” she shrugs brightly “But you just can’t wait for people to offer you things! You just have to take a chance!” She savours the word “risk” like someone enjoying a particularly tasty canapé. Which is a sentiment that Bonnie Parker might have appreciated.

“I wasn’t raised in the arts at all!” Until a fateful production of Little Shop of Horrors in Grade 11 proved addictive — “a gateway musical!” she laughs — Neufeld was going to be a psychologist. “And here I am!”

Of her cast-mate she is equally enthusiastic. “He’s got ideas! And he’s going places!” she declares, describing Lindholm’s sound as  “very electronic pop. Alternative. Dance-y. With a synthetic 80s vibe….”

After last summer’s Patient Mango/ Straight Edge Theatre success with Bat Boy The Musical, the pair will be back together again at the upcoming Fringe, with “another alt-camp musical,” as Neufeld describes the horror gore cult extravaganza Evil Dead The Musical. “A beast of a show, with lots of music and lots of blood!”

Meanwhile, there’s a small-scale musical that Neufeld and Lindholm, along with musical director/pianist Nick Samoil, have all to themselves. The music, says Lindholm, “is kind of a pop take on the western, musical theatre-type pop that is…. It hits on a lot of styles, but it lives in pop.”

“Since we don’t play other characters,” says Neufeld, “we’re finding a way to have it still feel like a full world.”

So, were Bonnie and Clyde in love? Neufeld and Lindholm grin, pause to consider, and opt to keep it mysterious. “That would be a spoiler!”

Running: Friday through May 21