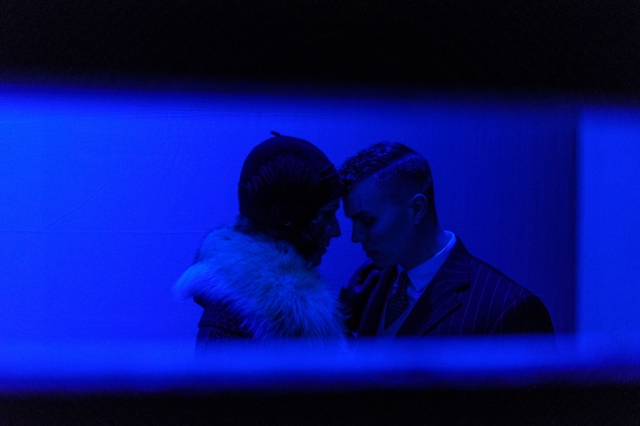 Northern Light Theatre director/designer Trevor Schmidt is something of a wizard of witty theatrical transformations. With Bonnie & Clyde the two person six-gun musical, the Northern Light season finale, his proven ingenuity has a double challenge.

On the one hand, there’s the space itself, the tiny PCL Studio Theatre — a go-small-or-go-home venue where the epic has to be suggestive rather than exhaustive and (like it or not), the audience is in the show. On the other, there’s the musical itself. It’s a chamber piece in which the American musical-writing trio of Will Pomerantz, Andrew Herron and Doug Ritchie sets about telling the celebrated story of the Depression era power couple as a rom-com with (very) conventional musical theatre “relationship” songs.

As to the first hand, Schmidt’s clever design, assisted materially by the Adam Tsuyoshi Turnbull’s dramatic lighting, reinvents that studio space and the optic of close-up and distance, over and over again in the course of 85 minutes. Against the backdrop of sensationalist 30s headlines, the love story plays out in front of and behind a slatted wooden wall that evokes the rustic hideaways where Bonnie and Clyde, on the run from the law, hole up as their fatal attraction proceeds.

We, the audience, are sometimes cast as the Barrow Gang; Bonnie, who’s the media slut of the pair, resents the split focus (“And who,” she demands pointing at us, “are they?”). Sometimes we’re the contemporary witnesses torn between conscience and kudos, the wish fulfilment that fuels celebrity.  Sometimes we are ourselves, a modern audience to whom Bonnie Parker and Clyde Barrow, in alternating showbiz spotlights, deliver self-validating songs and explain themselves.

Schmidt’s playful stagecraft conjures getaway cars from headlights, bucolic escapades from picnic blankets, narrow escapes into the blue shadowy glow behind the slats where we see them as silhouettes. They can run but they cannot hide. Tsuyoshi Turnbull’s lighting, which plays in a palette ranging from historical sepia to historical inevitability blue, is a veritable storyteller in itself.

The co-stars of the Northern Light production, Amanda Neufeld and Matthew Lindholm, are appealing, powerhouse performers, who know exactly what to do with the power ballads that are Bonnie & Clyde’s version of soliloquies.

What they have to work with in this little musical is, in many ways, less assured than their performances. Neufeld brings a bright, round-eyed, acquisitive magnetism to a character who freely admits her life goal at the outset is revenge for a humiliating series of setbacks, including a failed marriage, after school stardom.

Lindholm as Clyde, fresh out of jail for petty thefts, has a certain rueful, moody worldliness as he explains that he hasn’t “had” several jobs, he’s “done” several jobs. He says feelingly of Bonnie that “she’s the only girl ever made me feel what I do is worth something,” just as if he was a low-paid social worker or barista instead of a small-time thief.

After a chance encounter in a diner where Bonnie is systematically breaking dishes hoping to get fired, they get a prophetic love duet, of the fatal attraction ilk: … “and you’re sunk!”. They each get songs of empowerment, songs of want (“I want more!”) songs of doubt (“how have I come to this?”), songs of foot-planting resolution (“I’ll think of him, and throw my fears aside…”), songs of self (“this is who I am!”). They get a finale anthem (“we chose our way, and that’s the way we’ll go!”). With some exceptions, like a funny on-the-run car song with a 30s flavour (and punctuated by gunfire), both the placement and the lyrics are more than a little predictable. And, despite the expert ministrations of Nicolas Samoil, at a country bar-type plinky-plunk upright piano, the songs sound a bit like 11 o’clock numbers recycled from somewhere else.

But they’re delivered with compelling intensity by Lindholm and Neufeld. And the creators certainly don’t have to dream up an abrupt ending, thanks to history.

In between, a story emerges of mutual attraction based on need. The ante is upped when Clyde gives Bonnie a gun; it’s upped again when Bonnie uses it. Serial murder and its attendant celebrity, not to mention Bonnie’s insatiable appetite for newspaper coverage, seal their fate.

So, can you tell a behind-the-history story, with two actors and a roster of power ballads that all sound pretty much interchangeable? Well, yes you can — if the actors have pipes and charisma and the director is savvy. Be impressed by the pipes, the charisma, the savvy that have gone into this production.