Teatro turns 35 with a new season of comedies, variously hued 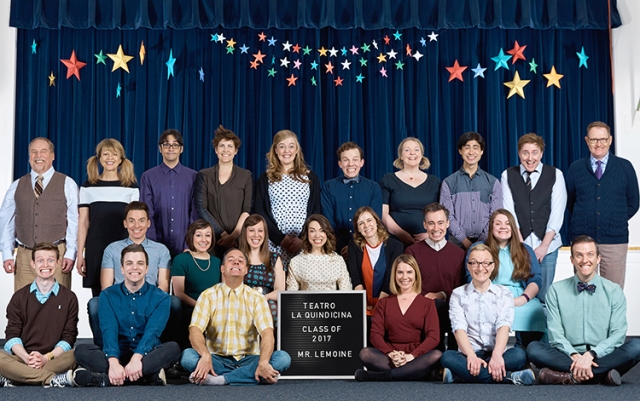 The Teatro class of 2017: the season ensemble at Teatro La Quindicina. Photo by Ryan Parker.

— Dominica, in The Talking Turk

Now, there’s a mantra for a Teatro season.

In The Salon of the Talking Turk, the vintage Stewart Lemoine comedy that launches Teatro La Quindicina’s  2017 season this week, a Long Island socialite of the ‘20s acquires an exotic, life-sized automaton.

The mechanical fortune teller, dressed “Turk-ishly,” is an instant sensation. People seek him out, ask questions, interpret his pronouncements as wisdom, and make changes and discoveries—small and large — in their lives.

The notion of change, inherently dramatic, is built into the history of a company born at the very first Fringe (a catalyst for civic transformation in itself, to be sure). And on the eve of Teatro’s 35th anniversary summer, their second season at the restored Varsona, it was on the minds of resident playwright Lemoine and artistic director Jeff Haslam last week.

The Salon of the Talking Turk was inspired by Lemoine’s deep-seated attachment to the Offenbach opera The Tales of Hoffman (“a masterpiece! a Shakespeare among operas!”). Its three tales by 19th century fantasist E.T.A. Hoffman, of Nutcracker fame, include the wind-up doll Olympia and a talking Turk. Lemoine, who has decisive views on the opera’s restored and rightful ending, considers his affection for that particular opera a life-changer; as he’s said, it was his first full-bodied, sit-down opera experience as a kid.

When The Salon of the Talking Turk, Lemoine’s first new comedy in three years, premiered in 2005, Teatro was in the midst of discoveries of every size and shape. For one thing, as Haslam recalls, “we were taking Pith! (a signature Teatro hit) back to New York (after a Fringe run there) for a three-week Off-Broadway run.” For another The Exquisite Hour, Lemoine’s poignant turning-point study of the small but momentous changes in an uneventful life — the company’s graceful (temporary) farewell to the Fringe when it premiered in 2002 — was getting productions elsewhere, too.

Both plays, which expand conventional notions of comedy in different ways, have found their way into the five-show 2017 lineup. 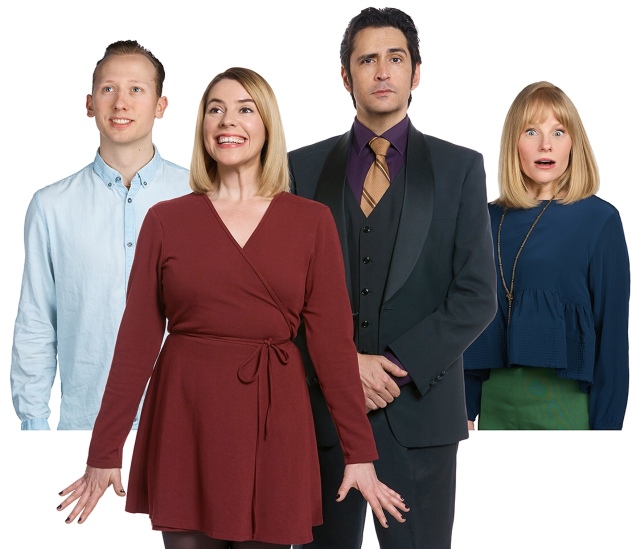 After a dozen years, Mark Meer, who first donned the ceremonial fez to originate the role, is back for the revival of The Salon of the Talking Turk. In this advice-dispensing enterprise, he’s joined by Teatro regulars Louise Lambert and Shannon Blanchet and newcomer Braydon Dowler-Coltman (in roles originally written for Teatro stars Leona Brausen, Davina Stewart, and then-newcomer Andrew MacDonald-Smith). It opens Thursday and runs through June 10.

The Exquisite Hour, Teatro’s Fringe production this summer (Aug. 18 to Sept. 2), remains one of the company’s most popular shows. For the upcoming revival of Lemoine’s first-ever two-hander, Haslam returns to the role, specially written for him, of a mild-mannered department store “supervisor of merchandise receiving.” Zachary Teale finds his regular, predictable existence changed forever on the summer evening in 1965 when a stranger arrives in his backyard with a simple, polite question: “are you satisfied with what you know?” Belinda Cornish, who’s been in several revivals of The Exquisite Hour with Haslam, returns to the questioner’s role originated by Kate Ryan.

Teatro, the city’s leading purveyor of new Canadian comedies, programs a mix of premieres and revivals. And the company makes a point of recruiting newcomers for its ensemble every season to play alongside veterans. Dowler-Coltman, for example, who plays the sassy millionaire orphan kid brother Wally in The Salon of the Talking Turk, caught their eye in Dave Horak’s production of Burning Bluebeard. And his funny, sharp-edged performance in Catalyst’s Fortune Falls cinched the deal for his cast-mate Blanchet.

There are two premieres in the season. One is a new ‘30s-style screwball comedy by actor/playwright Jana O’Connor, who wrote Going Going Gone on spec and offered it first to “my family,” as she refers to Teatro. Talk about coming to the right place with an idea. “There’s a great company tradition of screwball comedy,” as Haslam notes. “There’s an element of adventure to a screwball,” says Lemoine happily “Jana’s has people going all over the place on the eastern seaboard. Lies are exposed!.”

MacDonald-Smith and Rachel Bowron, fresh from the Calgary run of Crazy For You, star, along with Davina Stewart, Mark Meer, and Celina Dean. MacDonald-Smith plays “a gentleman with more fiancées than is perhaps ideal,” as Lemoine puts it drily in his website notes. Things devolve from there into near-misses with chaos. Dave Horak, of Edmonton Actors Theatre, directs the production that runs June 22 to Canada Day.

The season’s other premiere (July 13 to 29), is a new six-actor Lemoine murder mystery I Heard About Your Murder. It’s a form that intrigues Lemoine — for its structural rigour (what information to reveal and when, what to withhold) and for the pleasure it gives audiences. “They’re very satisfying when they’re done well. And such fun to work on since the audience is so attentive!”

Lemoine has written murder mysteries before, The Ambassador’s Wives and Evelyn Strange among them. Haslam reports that when Lemoine was writing the latter, the playwright said, memorably that “I thought so hard I felt my brain move.” His cast of six includes two Teatro newcomers, Patricia Cerra and Garett Ross.

The season finale is a revival of Lemoine’s ’90s comedy Shocker’s Delight (Sept. 28 to Oct. 14), directed by Teatro fave Ron Pederson, who was in a 2004 revival. It’s a funny and moving story of friendship and loyalty amongst three ‘50s college kids (originally written for Julien Arnold, Davina Stewart, and Haslam).

Pederson, a tireless promoter of Lemoine comedies in his adoptive Toronto — he directed a production of The Exquisite Hour there — has long called Shocker’s Delight “my favourite play.” His cast includes Ben Stevens, with Teatro newcomers Richard Lee Hsi and Melanie Piatocha..