Psst, are you going to Brad’s party? Everyone We Know Will Be There

Everyone We Know Will be There: A House Party In One Act, Tiny Bear Jaws. Photo (from 2016 workshop production) by Mat Simpson.

Hey everybody, we’re invited to a party at Bradley Freeman’s house.

He’s turning 17 and, yay, his parents are away somewhere, on a yacht. So he’s having people over.

In Everyone We Know Will Be There: A House Party In One Act, the new site-specific play created by Elena Belyea for her company Tiny Bear Jaws, we’ll be partying in a house (and back yard) in Westridge. An audience of 25 max, we’ll be divided up into five “pods,” each assigned to follow one of the five central characters through the house. And we’ll be meeting up with an ensemble of eight other party guests from time to time.

Everyone We Know Will Be There  — one of six mainstage productions at this year’s Nextfest (the multidisciplinary festival of the next generation, opening Thursday) — is theatre up close. Very close. So close you can see what characters are texting to each other on their phones. Belyea likes her theatre that way.

There is something about actor/playwright/creator Belyea, built into her artist DNA, that resists the idea of theatre in formal conventional configurations and spaces. “That’s why I write plays: the idea of live-ness. Immediacy. Intimacy. What is the story that needs to be told with people next to it?”

That sensibility is something she shares with director Andrew Ritchie, artistic director of the “site-sympathetic” Shakespeare company Thou Art Here. And technical director/ production manager/ stage manager/ sound designer Tori Morrison is tuned to the same frequency, too.

After all, five years ago the three enterprising friends had the bright idea of founding Found. All three have moved on now. But the Found Festival of intimate original theatre specially designed for the unexpected spaces of Strathcona — stores, bars, memorial chapels, back alleys, apartments — returns later this June (under Beth Dart’s artistic directorship).

Her house party play had its origins, says Belyea, in a second-year theatre-for-young-audiences playwriting project in her time at the National Theatre School. “I asked myself ‘what is the play I wish I could have written for a younger version of myself?’”

So who was this contagiously exuberant person when she was 17? “I felt like a young weirdo … isolated, alone,” Belyea says.

“I originally wrote it as a black box play,” she says of a production that’s 14A (“all that underaged drinking and making out…”). “But it felt like it should be in a house. That was how it was supposed to move; the script was not a very good indication of what it was.”

As Belyea explains, there isn’t one single narrative; there are five. “Five plays in one, really,” thinks Morrison. They belong to Bradley the host (who incidentally has his own Facebook account and Twitter feed), his older brother, his best friend, his best friend’s girlfriend, and an unpopular girl with a case of hero worship who’s crashed the party. “Each character has something they’re pursuing. And it all escalates into a giant explosion.”

Since we’re following different principals, we’ll come away from Bradley’s party with different perspectives on the experience. In this it’s like Punchdrunk’s Sleep No More, a long-running “version” of Macbeth that has its audiences on the move following characters through an old warehouse complex in New York. Belyea credits it as an inspiration. She’s a big fan, too, of Toronto’s immersive indie Outside the March; she mentions their TomorrowLove, which walked its audiences through a former funeral home.

Belyea, Ritchie, and Morison tried out Everyone We Know Will Be There in a workshop run a year ago, at Belyea’s mom’s house. “The cat was a wild card,” grins Morrison, “always sitting on chairs the actors were supposed to sit on.” The spontaneity this demanded amused actors and audiences for the four-performance run.

The cast — four of the five central roles will be occupied by returning actors — wanted to know if they’d  would be bringing Cecily to the new location, a friend’s mother’s house on Westridge Road. “No!” Belyea declared emphatically. “The throwing up in the car” was a deal-breaker.

Felines aren’t the only wild card in a production where scenes are running simultaneously in different rooms in the house. Everyone We Know Will Be There is a veritable stress test for the director and the stage manager. “I’m multi-tasking,” says Morrison, a recent National Theatre School technical theatre grad of unstoppable good humour and inventiveness. “I’m on this page (of the script). And also that page!”

Morrison has posted herself to the Bradley track; four assistant stage managers are in charge of the other central characters. “The ways in which the characters interact with each other, and with the ensemble” are a huge challenge of focus, communication, and timing.

“The timing demands a lot of courage,” says Belyea, who’s been scattering “fake family and baby photos” of the two fictional brothers judiciously around the house. “There’s stage fighting! And holy crap! the audience is so close!”

Everyone We Know Will Be There: A House Party In One Act, Tiny Bear Jaws. Photo (from 2016 workshop production) by Mat Simpson.

When you take theatre out of formal theatres, you demand an extra dimension in resourcefulness from the actors and crew. “There are safety issues. And neighbours (Belyea and co have done a lot of flyer-ing). No backstage. No theatre lighting system to make the main characters stand out.” Ah yes, and someone had to figure out the beer cans. “The cast drinks 26 fake beers a night,” laughs Morrison.

Incidentally, contribute 500 bucks to Tiny Bear Jaws’ Fund What You Can campaign (tinybearjaws.com), which continues till opening night, and they’ll name their fake beer after you. (Or you could pay less and have a real beer and discuss the play one-on-one with director Ritchie.)

“We’ve created a new cue-ing system,” grins Morrison. Since the characters are teenagers, they’re anatomically joined to their cellphones. “We use emojis: a cat is ‘stand by’, a dog is ‘go!’, an octopus is ‘something’s gone wrong’.”

Morrison has also created the sound design — tricky, too, under circumstances where the home sound system with its high school party music has to integrate with a more theatrical system of follows and fades. There’s projection, too. “Some characters watch Planet Earth; one character is shooting video….” 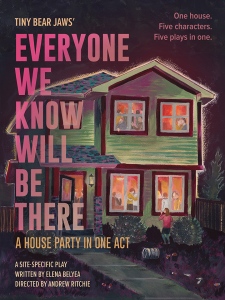 Everyone We Know Will Be There: A House Party In One Act, Tiny Bear Jaws. Poster image by Meags Fitzgerald.

As with Belyea’s solo show Miss Katelyn’s Grade Threes Prepare For The Inevitable where we were her class, the audience can’t sit back passively at Everyone We Know Will Be There. “When an audience comes to a show, what are the rules? And how can we subvert the expectations?” says Belyea. “We want to create an experience that’s visceral, immediate, and memorable.”

“In three years at Found (five for Morrison), we’ve had a lot of time to do things wrong,” laughs Belyea, who’s taking Everybody We Know Will Be There to Calgary’s Swallow A Bicycle after its Nextfest run. Some things can’t be improvised. “You have to have a rain contingency plan. Found taught me that.”

Everyone We Know Will Be There: A House Party In One Act

Running: June 1 to 10 at Nextfest, full schedule at nextfest.org