The fine art of the spontaneous: Improvaganza invites the world

True fact about the big wide world of improv comedy: it’s smaller than you think.

It’s the eve of an international comedy festival that will demonstrate this, in ways you didn’t see coming. Rapid Fire Theatre’s Improvaganza, a 10-day gathering of talent from hither and yon devoted to the principle of spontaneity in everything (especially laughter), returns Wednesday for a 17th annual incarnation.

And, as RFT artistic director Matt Schuurman explains, Improvaganza is a homecoming of sorts for many of the artists of the 20 or so troupes. They’ve arrived from, well, everywhere in surprising permutations and combinations. Many can trace their lineage back to this improv-mad theatre town, and Rapid Fire’s wide embrace of every kind of comic inspiration. This year’s edition of the comedy extravaganza is, says Schuurman wrly, “an homage to … ourselves!” 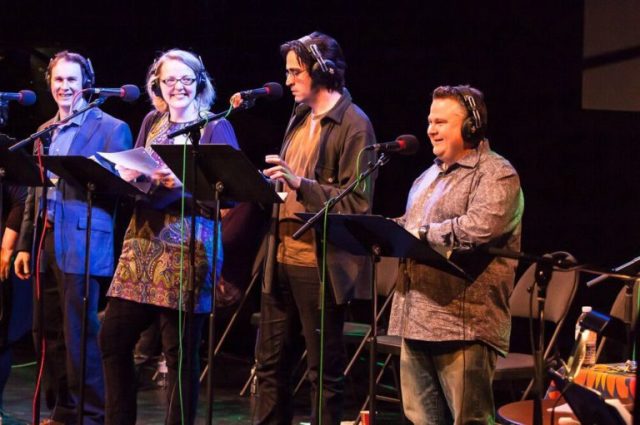 The first half of that evening, hosted by Schuurman and Julian Faid, is devoted to improv. And it unleashes an all-star Rapid Fire ensemble of improvisers, including former artistic director Amy Shostak, Ben Gorodetsky, Joleen Ballendine, and Joe Vanderhelm.

Improvaganza has a matchmaker gene. It’s typical of the festival lineup that Shostak, who’s moved to Vancouver, would return to her home town in an improv duo with Edmonton’s Ballendine. The worthy idea of Ra Power, says Schuurman , “is to try to have as much fun as possible. It’s very infectious.”

The two members of Calgary’s One Lions, Stephen Kent and Covy Holland, met in the “international ensemble” brokered at the 2012 Improvaganza. Schuurman has seen them, at the Vancouver Improv Festival, improvising their Waiting For ———, “where the blank is the name of an audience member.” For Improvaganza, this playfully literary duo, will premiere a new Mamet play, the one the American great somehow forgot to write: Glengarry One Lion. 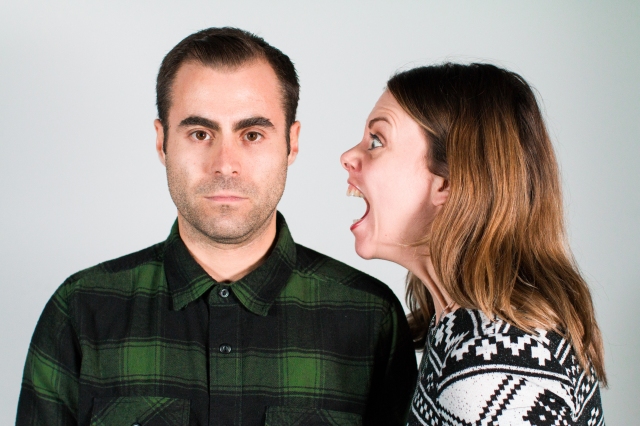 The award-winning Toronto duo K$M has Rapid Fire connections too. The K half, Kirsten Rasmussen, a U of A acting grad (we saw her in Azimuth’s Su-Kat), made her improv debut at Rapid Fire. Since then she’s gone from strength to strength, says Schuurman, who cites a bristling array of comedy credits including Second City, One Hour Has 22 Minutes, Schitt’s Creek, among them.

New York’s Reckless Theater, arriving at Improvaganza with Dark Sneak Love Action, a title to cherish, is a spin-off from 4-Track, a NYC improv troupe who’ve frequently shown up at the Rapid Fire festivities. “This is Reckless’s first foray into international touring,” says Schuurman. “They’re bringing four players. And we’re their first stop!”

The improbable marriage of talent that powers Speechless — two wordless improvisers from Bogota, Colombia and a DJ from Winnipeg — was brokered at Rapid Fire’s Improvaganza in 2012. They’ve travelled the world ever since.

The traffic in international improv is both incoming and outgoing, of course. “Rapid Fire tours quite a bit,” says Schuurman mildly, by way of explaining the unlikeliness of Improvaganza’s first Slovenian troupe, IGLU Theatre of Ljublyana. “I saw them in Milan,” he says casually, as if championship Slovenian improv theatre companies were a regular part of the Canadian comedy scene.

It’s unpredictable, as Schuurman says of the Improvaganza chemistry that’s the gift that keeps on giving. And the “international ensemble” assembled with artists from around the world, is the capper to the Uncertainty Principle that keeps improv creatively spontaneous (and accumulating air miles like mad). This year’s 10-member ensemble includes artists from Amsterdam, Portland, Calgary, Vancouver, Atlanta, Winnipeg, and Edmonton. Its two directors, Kristen Schier and Christian Capozzoli, are from Philadelphia and New York (respectively).

Schuurman gets “over 100 applications” a year for Improvaganza showcase slots. “It’s a destination festival,” he says happily of an extravaganza that includes an improv or sketch showcase plus a Theatresports match in every show.

And just so you know, I did ask about the enigmatic name of the Portland improv company Broke Gravy (June 17, 10 p.m.). Schuurman, who saw them in Vancouver last year, didn’t know what it meant either.

The Portland trio “interviewed an audience member about their family, their life, their romantic partner. And then, with a narrator in the James Earl Jones style, they did an homage to that person’s life…. It was a charming set!”

Where: Citadel Zeidler Hall, the Club, and Maclab Theatre