Once more unto the park dear friends: the 29th Freewill Shakespeare Festival draws nigh 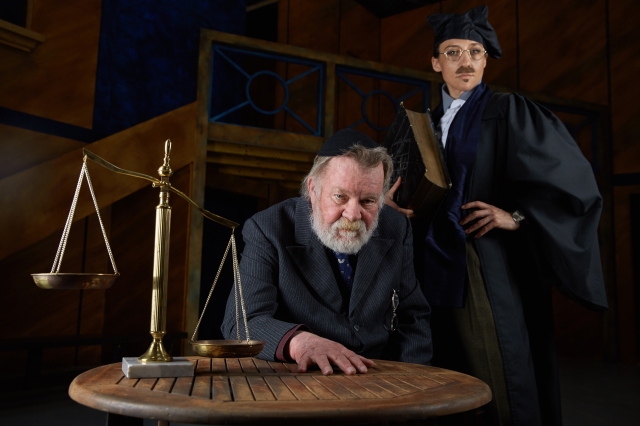 The love of summer Shakespeare runs deep in this town.

One morning last week, the guest director at this year’s 29th annual Freewill Shakespeare Festival arrived for rehearsal at the Heritage Amphitheatre in Hawrelak Park. And there was a coyote, hanging out in an aisle. Late for an audition perhaps?  Early for a preview?

In 29 summers of camping out with Shakespeare in the great outdoors, the audience demographic for Free Will’s boldly physical, accessible productions has included chattering squirrels, squawking gulls, screaming jays, ducks, a voluble troupe of crows, a family of weasels, and a memorable orange oriole (as identified definitively by Julien Arnold, a leading company member and bird-watcher extraordinaire). Mosquitoes don’t count.

Free Will, the troupe that’s on a first-name basis with the world’s starriest resident playwright, is back in the park — with two alternating high-contrast productions, The Merry Wives of Windsor and The Merchant of Venice.

And Ashley Wright and Marianne Copithorne, the directors of this year’s alternating festival shows, are on location at a picnic table — the former giving off a distinct air of after-shave Off, the latter unwrapping new repellent wipes — to discuss a pair of plays that, at first glance, couldn’t seem more different. And yet….

“It’s in the strength of the women characters in both” that resonates with Freewill artistic director Copithorne. It’s her second crack at directing Merchant, a “comedy” that sits very uncomfortably in that category. It has become one of the most challenging in the entire Shakespeare canon with its depiction of Shylock the Jewish money lender and the casual bigotry of his Gentile tormenters. And clever, agile, strong-willed Portia is at the heart of both the romantic events of the play, and (disguised as a lawyer) the legal loophole that shuts down Shylock’s “pound of flesh” revenge. John Wright is back in the role he  occupied in Copthorne’s 2004 production, with Belinda Cornish as Portia. 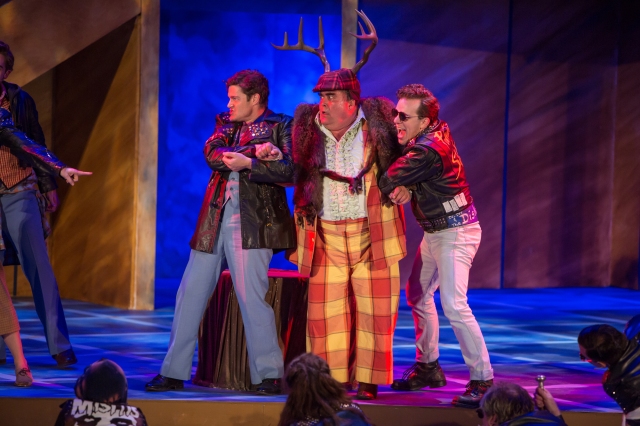 Robert Benz as Falstaff in The Merry Wives of Windsor. Photo by Lucas Boutilier.

As for The Merry Wives — Shakespeare’s exuberantly oddball 1597 comedy in which Falstaff and his cronies suddenly appear in middle-class suburbia (and a variety of disguises) — the action of the play is engineered by two resourceful housewives. They take revenge against the dissipated, preposterously self-regarding Falstaff, who’s convinced himself that both ladies are smitten with him. In the process of their plotting, a value-added bonus, the fun-loving Mrs. Ford and Mrs. Page get to torture the former’s choleric, irrationally jealous husband with doubts. 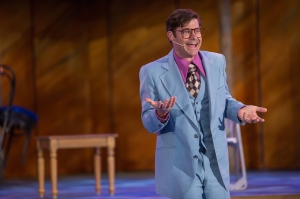 Women rule Windsor. Mrs. Page’s daughter Anne turns out to have a sharp mind of her own when it comes to matrimony; she insists on marrying for love. “There’s feminist bent to it,” says Wright who, like Copithorne, rejects the notion that Shakespeare shortchanged his female characters.

The Free Will production is an outdoor homecoming for Wright, whose memorable turns in the park include a riotous Falstaff in a 2002 James MacDonald production of Merry Wives. Of late, the actor and newly minted U of A directing grad has been doing his summer Shakespeare elsewhere (Vancouver’s Bard on the Beach).

Wright and Merry Wives go back, way back, to a 1994 production in which he played Slender, the dimbulb “hero” of one of the many subplots, and a contender for Shakespeare’s daffiest character. Wright has twice played Falstaff in Vancouver,  most recently last summer in a production set in ‘60s (in Windsor, Ont., with an onstage band, playing country). He loved it, especially since the concept “didn’t overtake the play.”

Wright is back, in the very park where he played Falstaff 15-years ago as an over-ripe vainglorious Hollywood star of the ‘1930s. For his own production of Merry Wives, the play Shakespeare set in small-town middle-class England, Wright says “I’ve gone for 1970s disco. We haven’t changed the words; we haven’t changed the plot points.”

He describes the spirit of the concept: “I remember being 10 years old, and the dads would come me from work on Friday night, and all the parents would end up doing the hustle.” Sound designer Dave Clarke has mined the top hits of the ‘70s, naturally including “anything by Earth Wind and Fire,” laughs Copithorne. “I’m not afraid to admit it. I loved, I still love, disco!”

Like A Midsummer Night’s Dream or As You Like It, Merry Wives, as Wright points out, is a natural for the great outdoors. “Eighty per cent of Act II is outdoors,” he says, of a kooky assortment of events including a duel and a prank fairy revel scene in Windsor Park. As for the interior scenes, they’re set in a bar, the Garter Inn: it’s that kind of play.

Finding an apt time and place for The Merchant of Venice is a tricky business: Copithorne considers it “almost impossible to place the play right now.” Persecutions around the globe have seen to that. Instead she locates the play, as she did her 2004 production, in 1939 Venice. Fascism is on the rise…. People can look back and get perspective; you can see very clearly how this (the events of the play) could happen.”

Copithorne argues that “it’s not an anti-Semitic play; it’s a play about that.” In Shylock Shakespeare didn’t write a stereotype; “Shakespeare wrote a human being, like he does with all his characters….”  The biggest challenge? “Finding the balance between the comedy, the romance, the serious stuff.”

Wright loves Merry Wives not only for its strong women characters  — “women plotting and making fun of men!” — but “a real sense of domesticity that you don’t find in any other of the plays.”

The challenge, he says, is what to do about “all this crazy characters, all those colloquialisms, the subplots, the local jokes.”  A joke about Banbury cheese? An incomprehensible sequence with Germans, and stolen horses that aren’t really stolen? Huh? Wright smiles affably. “You look at them, and then you cut, cut, cut!”

What on earth are Falstaff and his cronies from the Henry IV plays doing out in the countryside amongst the townspeople of Windsor anyhow? “Who the hell are these people?” laughs Copithorne who played Mistress Quickly to Wright’s Falstaff in 2002. “The Adams Family?”

She and Wright allude to the traditional story, possibly apocryphal, that Queen Elizabeth herself personally commissioned this, “the most farcical of Shakespeare plays,” because she wanted to see Falstaff in love.

Who wouldn’t? You’ll be seeing that raucous hilarity starting Thursday and all even dates (and matinees). And on alternate nights, as the light fades to summer dusk, you’ll see what happens when a man nearly inured to the casual cruelties of his world is pushed too far.

The Merry Wives of Windsor, The Merchant of Venice

Running: Thursday through July 16, with Merry Wives on even dates and all matinees, and Merchant the odd dates. Full schedule at freewillshakespeare.com