A world of casual bigotry darkens: Freewill Shakespeare Festival revisits The Merchant of Venice. A review

Belinda Cornish as Portia, John Wright as Shylock in The Merchant of Venice. Photo by Lucas Boutilier

Vivacious women, high-spirited men, spontaneous dancing, drinks and keep ‘em coming…. Venetian cafe society is in a festive mood at the start of the absorbing production currently bringing one of Shakespeare’s most troubling plays outdoors into an Edmonton summer dusk.

A stooped, black-clad figure passes through; gaiety (along with Matthew Skopyk’s cleverly jazzy soundscore) suddenly stops in its tracks. We hold our breath. In a moment of startling ugliness, the old man will be spat at. And racial slurs that in the play are reported by their victim a couple of scenes later will actually be hurled at him, on the spot: “misbeliever!” “cut-throat dog!”

In that opening moment, Marianne Copithorne’s production of The Merchant of Venice steps up to the implications of its chosen setting, the gathering darkness of 1939 Europe. The outsider is Shylock, the Jewish money-lender. And as he triggers in his world a disturbing mixture of vicious racial hatred, casual bigotry, deep urges for vengeance and competing pleas for mercy, it’s clear that resolution won’t be within the compass of this four-century-old play as it surges forward. Not then. Not now. Not any time soon.

Maybe it never was, in any setting. But it’s a measure of maturity and confidence that the Freewill Shakespeare Festival, now in its 29th summer in the park, would return to the challenges of The Merchant of Venice with such a thoughtful and probing production.

Director Copithorne not only shows us what Shylock is up against routinely in a society where anti-Semitism is endemic, but there’s this: it’s Antonio, the Merchant capitalist himself (Nathan Cuckow in a brave performance), who’s the most aggressive and brutal of Shylock’s abusers at the outset. In that opening burst of racist vitriol, even Antonio’s friends seem taken aback, at least by the social awkwardness of his vehemence.

Later, their repeated testimonials to Antonio’s kindnesses and generosity — he’s a stand-up friend — are poisoned by our memory of that moment. Even the horrifying developments in court are coloured by it. Under the circumstances, when Antonio comes to borrow money to finance his friend Bassanio’s courtship of a wealthy heiress, the acid of Shylock’s rejoinder — “hath a dog money? is it possible a cur can lend 3,000 — seems almost mild, a sort of sardonic resignation.

As John Wright’s moving performance makes clear, Shylock has survived a thousand such blows. The “ancient grudge,” like the deck that’s been stacked against him, has been constructed moment by moment, plank by plank.

A dozen years ago when Wright played Shylock, he had a pulsing subterranean rage to him. This time, it’s more like embittered restraint, born of endurance; Shylock seems battered, more forlorn. There’s a catch in his voice. His insistence, beyond every practical consideration, on the terms of his bond — a pound of Antonio’s flesh upon default of a loan — has the ring of a last stand by the time the case comes to court.

Shylock is, finally, after revenge, but it’s after a lifetime of persecution and only as a last resort. And he seems bowed down with the weight of knowing what’s to come in the world. 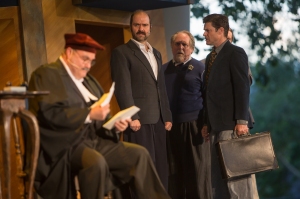 In view of this sad portrait, Copithorne’s compelling production has evidently thought about the tricky contradictions of the play, the problem of Shylock’s tormenters, the fact that his persecutors are the very characters whose romantic fortunes we’re meant to care about. In this, it has the huge advantage of two appealing, highly intelligent performances from Belinda Cornish as Portia and John Ullyatt as Bassanio.

Both characters have a certain rueful tone. . There are top-notes of self-deprecation in the wit they present to the world. Cornish’s Portia is a genuinely witty, animated heroine; her jocular comradely relationship with her staff, especially Nadien Chu’s Nerissa, is one of the delights of the play. Their joint mockery of the accents and attire of Portia’s series of foreign suitors come to test their luck with the three caskets — Portia’s late father’s condition for marriage — is tempered with an indulgent sense of amusement.

And those casket scenes are unusually funny in this production;. I can’t remember the last time I got a kick out of them. Here I laughed out loud to see Alex Cherovsky’s delightful turns as the preposterously self-regarding Princes of Morocco and Arragon.

Despite the oddly spread-out staging of the courtroom scene, where Portia has arrived in lawyer disguise to argue the case against exacting the bonded pound of flesh, you feel she’s troubled, thinking on the spot, improvising desperately to save Antonio, but reluctant to corner Shylock past recovery.

Ullyatt’s urbane, breezy, accommodating Bassanio, is naturally conciliatory, which sets him apart a little from the nasty-ness of his set. When Launcelot (Ryan Parker) joins his staff, he refuses to accept a servant’s bow from the cowed newcomer, opting instead to shake hands. It’s an impulsive gesture that speaks volumes.

Apart from this natural pairing, though, Copithorne’s production resists the impulse to celebrate romantic comedy resolutions. Nerissa and the amusing but vicious Gratiano (Jesse Gervais) are at odds; in the end she rejects him. Shylock’s conflicted daughter Jessica (Cayley Thomas), who’s fled her father’s household bearing his casket of loot, can find no respite from her dilemma, impaled between love and loyalty.

Haunted by the ominous diaspora image of Shylock who exits, suitcase in hand from the upper level of Jim Guedo’s classic staircase design, she sends away her beau Lorenzo (Ron Pederson),  to sing the saddest of songs, alone.

There’s a price to be paid for a society whose sense of humanity is selective; this fine production balks at the thought it can all be smoothed over.

The Merchant of Venice

Running: through July 16, on odd dates, alternating with The Merry Wives of Windsor (on even dates and all matinees)