A direct link between theatre and our shared history: Indecent in New York

“There is a story we want to tell you….”

There is no shortage, in the theatre archive, of plays about plays, the writing of them, the putting on of them, the view of them from backstage. I’ll never forget the one I saw last week in New York.

Paula Vogel’s Indecent, a luminous collaboration with Tony Award-winning director Rebecca Taichman, tells a theatre story, a real one, that connects us directly to the explosive historical and cultural currents of the last century. And to the tragic arc being forged in our own.

A row of actors sit before us in darkness, lit by footlights against a brick back wall that feels like the Kilroy Was Here of history. When they stand, ashes trail from their sleeves. It’s a startling image that will be repeated, in more ominous circumstances, later in the play.

The actor playing the tailor-turned-stage manager Lemml (Richard Topol) introduces the ghostly company of actors who brought Sholem Asch’s landmark 1907 Yiddish play God of Vengeance from the capitals of Europe to America. 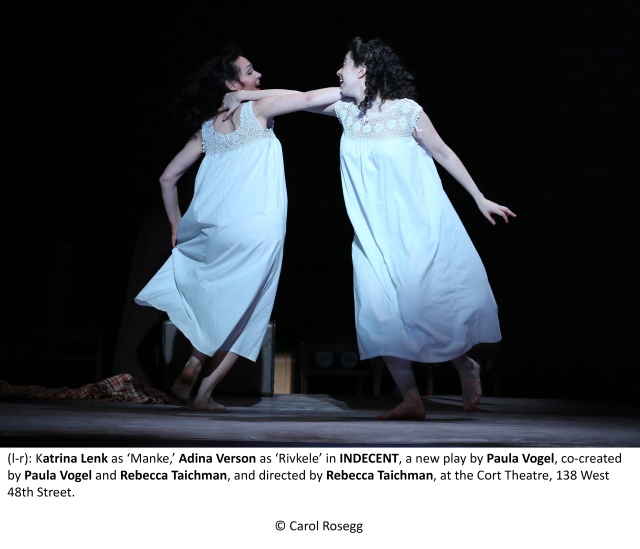 The play, in which a rabbi’s daughter falls in love with one of the prostitutes in the brothel downstairs, was warmly received in the Greenwich Village of 1921, the first lesbian kiss on an American stage. But its move uptown to Broadway in 1923 was a disaster. Notwithstanding the fact that the love scene between the two women had been censored pre-emptively out of the script, it was shut down by the vice squad and prosecuted for obscenity. And the embittered playwright turned from theatre to other kinds of writing.

Later, the company would, fatally, return to Europe and perform the play in the Lodz ghetto in Poland. Ashes to ashes: the immigrant experience, homophobia, anti-Semitism, censorship, war….

With its six-actor ensemble in a play-within-a-play, the production moves backwards and forwards, in memorable stage images, klezmer music (played live by the actors), dance, song, and a repeated projection that says “a blink in time.”

And speaking of blinks, the actor Topol playing tailor/stage manager Lemml, whose life (as he tells the playwright Sholem Asch) was changed by his play, steps forward at the final curtain call to explain a highly unusual development. Indecent closed in June. And then, occasioned by passionate letter-writing to the Broadway producer, actually opened again for six weeks. It runs through Aug. 6.

It’s a magical connection to a time, and the sense of what live theatre can do in linking us to cultural heritage. In her program notes to Indecent, Vogel says “I believe the purpose of theatre is to wound our memory so we can remember.”

Indecent has a connection to us, in Edmonton, too. Sholem Asch’s son, Moses ‘Moe’ Asch, was the founder, in 1948 Greenwich Village, of Folkways Records, an invaluable repository of American folk and roots music and “world” recordings before that term entered the popular lexicon. Moe’s son Michael Asch, for many years an anthropology prof at the U of A before he and his wife retired to Victoria, secured the entire Folkways archive for the university here.

His grandfather’s groundbreaking play is a living document, a testament of the “cultural diversity” that has turned out to be under attack once more in this century.