That masked man is back: a new Phantom of the Opera sings the music of the night 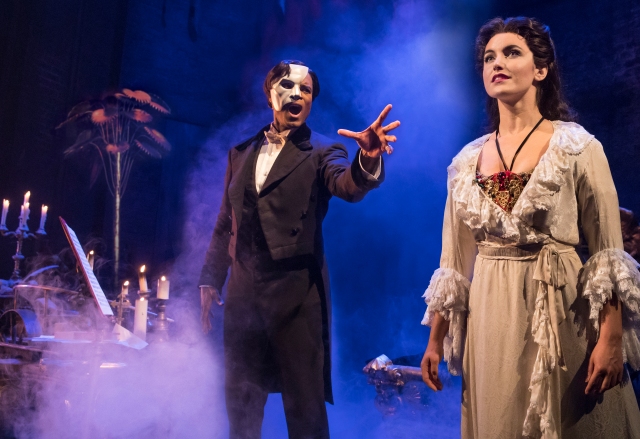 Derrick Davis and Eva Tavares in The Phantom of the Opera, Broadway Across Canada. Photo by Matthew Murphy

“Some of you may recall the strange affair of the Phantom of the Opera, a mystery never fully explained….”

With this opening gambit, and signature organ arpeggio, a 1911 beauty-and-the-beast potboiler by an obscure Parisian hack/bon vivant named Gaston Leroux turned into one of the monster entertainment success stories of our time.

In the three decades since its 1986 London premiere, Andrew Lloyd Webber’s lushly romantic 1986 pop-Puccini hybrid has phantomized the world, propelled on a jet stream of pure box-office high-test.

Thanks to Lloyd Webber and co, the subterranean vocal coach lifted from a wordy novel no one has actually read is arguably the most famous masked man in history (with the world’s best-known lighting fixture at his disposal). People around the globe flock — as  over and over, as the ranks of phantomaniac repeaters attest — to feel “the power of the music of the night” and see the guy not get the girl. “No use resisting,” as the Phantom himself advises his beautiful chorine protegé. “Abandon thought and let the dream descend.”

And talk about mysteries never fully explained, here’s one. Four years ago, with Hal Prince’s extravagantly staged Phantom of the Opera continuing to sing the music of the knight (that would be Sir Andrew Lloyd Webber to you) to sold-out houses in London and New York, producer Cameron Mackintosh launched a new version for North American touring.

Starting Wednesday, the world’s second-most lucrative musical of all time (after The Lion King) arrives on the Jube stage in a new production directed by Broadway veteran Laurence Connor. Were Mackintosh et al taking a cue from the Phantom himself, a modernist with acidic things to say about archaic performance styles? It’s not as if fans were clamouring for change, as associate director Seth Sklar-Heyn concedes genially. As he says, that’s the catch 22 of  long-running mega-hits with fanatical followings. “How can you do a revival of something that’s never closed?”

The Phantom of the Opera, Broadway Across Canada. Photo by Alastair Muir.

“On the page it’s everything people have come to know and love,” Sklar-Heyn says of the new production of The Phantom of the Opera that’s en route across the country, Vancouver to Montreal, before returning to America. It remains spectacular, as re-designed by Paul Brown. And with its cast and orchestra of 52, it’s undeniably huge, one of the largest productions currently on the road.

“Nothing has been reduced!” reassures Sklar-Heyn of a show that needs “the same number of tractor trailers (20) to transport as when it first took to the road” lo these many years. “But it’s updated; it takes advantage of new technology, new developments in (theatrical) engineering, things you couldn’t conceive of in the ‘80s when Phantom premiered….”

“The music itself, of course, is all there, the melodies, the lyrics are maintained, upheld. But it’s with new orchestrations that take into account new technology….”

The updating is “really in the direction,” says Sklar-Heyn, whose archive includes everything from Tom Stoppard’s Coast of Utopia to Finian’s Rainbow and such widely varying tours as Frost/Nixon and Evita. “It’s in the pulse, the way it moves from location to location without black-outs.” He describes that flow as “cinematic, close-ups and wide shots…. We cut from one moment to another, or fade.”

What Sklar-Heyn is describing is an update very different from the re-designed Les Miz, which replaced its famous revolving stagecraft with sophisticated projections. “We’re not about projection or video, except in two or three little moments…. We’re all about full 3-D scenery,” says Sklar-Heyn. “We fill the stage with it! And it’s massive. And very heavy!”

“It’s not about excess. It’s just about making it grand, operatic,” he says. After all, the story takes us to that extravagant Belle Epoque palace, the Paris Opera. “We need to capture the glamour of the period, incredibly lush, opulent. The physical (environment) of the production has to live at that level…. And it feels justified and balanced with the world of Lloyd Webber’s music. When the orchestra swells, the visuals must be there!”

Does the story have a different feel to it in this new production? Sklar-Heyn considers that it belongs in a new way to Christine, the ingenue the Phantom grooms for stardom. “She’s the focus of the tale. There’s no neon sign on Christine that says Follow Me; it’s just about perspective. Your eye follows her….It’s her story.” Director Connor “tried to come at it in a way that filled in the gaps. What are the moments I’ve always questioned? What does ‘the music of the night’ really mean?”

“We’ve tried to capitalize on the new talent,” Sklar-Heyn says of a cast led by Derrick Davis as the man trapped by his deformities, his genius, his desires, and Canadian Eva Tavares (replacing Katie Travis for the tour, starting in Edmonton) as the chorine he mesmerizes. Traditionally, the age difference between Christine and the Phantom has often meant the latter was a sort of father-replacement. “Here, instead of a man to replace Christine’s father, there’s a man to excite new emotions.”

“It has a different pulse, a narrative momentum,” Sklar-Heyn muses. “The way the world moves feels a little more contemporary; it makes Phantom feel like it belongs in the world of the modern musical theatre..…”

“We really want to give you real people, real threats, in a real working theatre…. We want it to feel tangible: the Phantom as a real man, the man, who’s an engineer, able to create the journey,” the iconic candelight cruise across a subterranean lagoon to the Phantom’s lair.

“We want to meet your expectations. And surpass them.”

The Phantom of the Opera