Review: SwordPlay: A Play of Swords 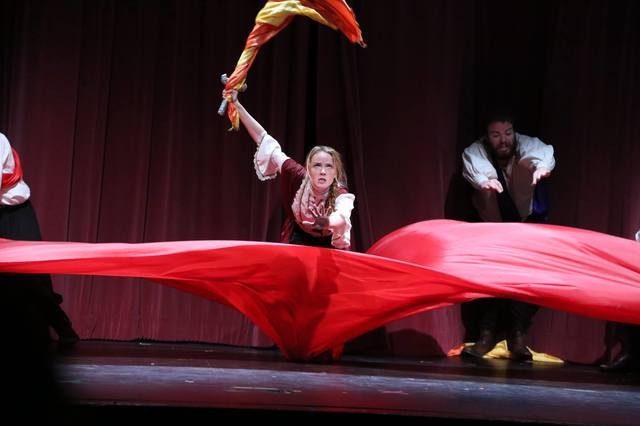 With SwordPlay: A Play of Swords, the Toronto comedy troupe Sex T-Rex delivers live theatre with something everyone secretly wants: a video game on legs, with references they can’t fail to get.

That they do this, with pizzaz, on a bare stage using only five people with the gift of the gab, feathered hats, tights, rubber rapiers wielded with ruthless brio … well, that’s the kind of low-budget ingenuity that fuels improv comedy and fringe festivals world-wide.

Inventive physicality, shameless pop-culture pilfering from sources like The Three Musketeers or Game of Thrones or The Princess Bride … that’s the engine of this zestful high-speed swashbuckler. The secrets of the plot, in all its daft convolutions, are safe with me: I couldn’t explain it even if I weren’t being held captive by a fire-breathing dragon.

Suffice it to say that classic scenarios of the thrust-and-parry genre are invoked, and stitched up with lavish outbreaks of swordplay. A kidnapped princess, abducted by someone nefarious related to someone royal, is in need of rescue. De-frocked swordsmen, in need of redemption after that whole sorry Roland fiasco (don’t ask), set forth on a heroic rescue mission — of the princess and their reputation — on the all-for-one one-for-all plan. They defy the auguries, crazy odds, unexpected obstacles, cheap-theatre limitations, mistaken identity crises, the new political realities, self-esteem issues. Did I mention the fire-breathing dragon?

As someone says, “you could have married a similar-looking girl with darker hair and no back story.” But no, my friends, if life were that simple, there would be no need for fancy fight choreography or warnings about “cartoonish violence and adult language.”

The cast — Jon Blair, Conor Bradbury, Julian Frid, Kaitlin Morrow, Seann Murray — attack with gusto. The proper term for their kind of loopy, winking attachment to something flimsy is zany. And zany is fun, in a pure fringe-y 60-minute-max sort of way.