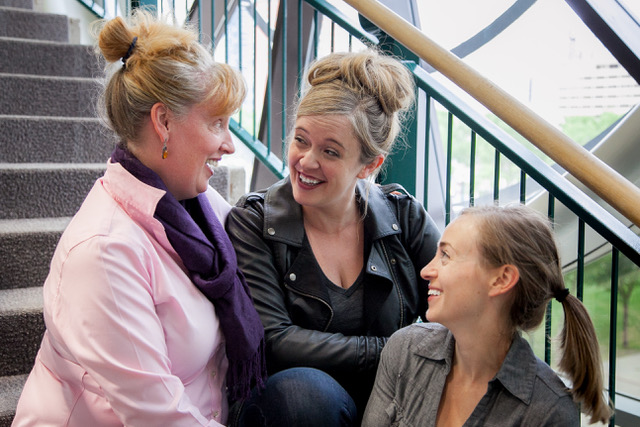 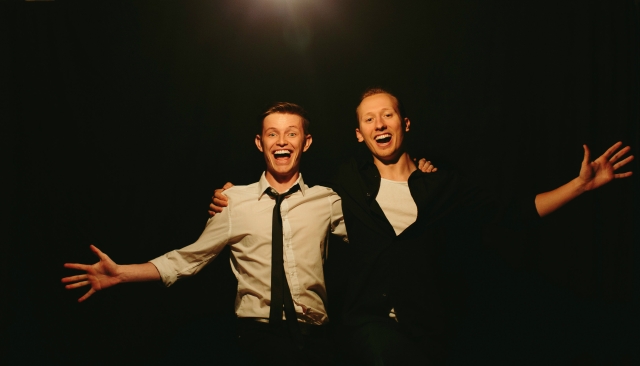 Luc Tellier and Braydon Dowler-Coltman in A Quiet Place. Photo by Mat Simpson.

One of the durable strengths of the Edmonton Fringe — something that sets it apart from the legion of fringe spin-offs across the continent — is its organic rooting in the theatre community here. It’s not like that everywhere.

Our coterie of theatre artists fell in love with the Fringe early — and stayed that way. And they still want to be at the Fringe, creating work for it, testing out inspirations, finding an audience, expanding their repertoire of theatrical skills.

Meet two exceptional young Edmonton actors who have risen to the provocation of the Fringe., Kendra Connor and Evan Hall are making their directing debuts at the Fringe with comedies of very different stripe and stretch.

Which explains why Connor found herself agonizing two weeks ago over the best way for her cast to build a blanket fort onstage in the course of a play. “Hours and hours!” she sighs, “building a fort, deconstructing it, then building it again.” And that was before the experiments with the Christmas lights began.

Connor is an actor: Most recently Edmonton audiences saw her clever and spirited comic performances in Theatre Network’s Irma Voth and Teatro La Quindicina’s I Heard About Your Murder. At the Fringe she’s a director.

The play is Myth of the Ostrich, a three-woman comedy by Canadian playwright Matt Murray that premiered at the 2014 Toronto Fringe. And Connor has  assembled “a three-Jen cast,” as she puts it: Jennifer Spencer, Jenna Dykes-Busby and Jenny McKillop. “Right away it got too confusing,” Connor laughs. “In rehearsal I call them by their characters’ names instead.” Some directorial tactics are clearly meant to be learned by improvising.

“I got to the place, as an actor in rehearsals, where I was thinking ‘I could figure out how to fix that’,” says Connor by way of explaining this new career venture. “By the rules of rehearsal, there’s only so much you can do as an actor; it’s taboo to direct your fellow actors, for example. But I’d be ‘hmmm, how would I do that differently?’”

For Connor, who was tipped to the play by Edmonton director Brenley Charkow, the appeal of Myth of the Ostrich is that it isn’t “just another three-hander for women,” she says. “What I like about it is (its capture of) female friendship…. I like plays in which women don’t spend time tearing each other down, being catty, fighting over a man; I like plays where women support each other.”

Airswimming, the haunting Charlotte Jones play in which Connor appeared with McKillop last summer, was all about that. Myth of the Ostrich, says Connor of this new Praise Doris venture, “is about moms, parental love, female friendship…. There’s something great about having women onstage, and letting them be hilarious!” 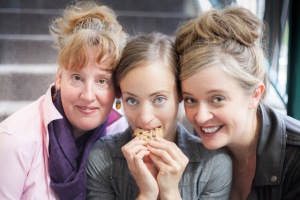 Spencer plays a liberal, permissive writer whose struggles to finish her book are interrupted in the course of an afternoon by tightly wound conservative type who’s discovered a letter from her son to the writer’s kid. “The afternoon turns to chaos” with the arrival of the “brassy Newfoundland gal” who gets most of the zingers, as Connor describes the situation.

“I’ve been learning a lot about talking to actors,” says Connor of this new turn in a theatre career. “You don’t want to give too many notes too early…. It’s about sitting back and knowing how much to give, how much not to.”

“When you have actors as strong and competent as the three Jens, you don’t create a performance for them. You watch them make offers, you says ‘amplify this, more of that, but in front of the couch not behind it’.”

“For me, this is a good way to start out as a director,” Connor says. “Not too expansive, not too design-y. Not a fantastical journey. It’s people having a conversation.” And it’s a comedy. “When the rhythm is right, it starts to sparkle.” That’s something she knows all about.

Braydon Dowler-Coltman and Luc Tellier in A Quiet Place. Photo by Mat Simpson.

Every time Evan Hall thought about directing — which he’s  done regularly for a couple of years — he was diverted by the irresistible lure of “getting to be in the play myself.”

“I’m fairly certain I wouldn’t be directing if there wasn’t a Fringe,” Hall says cheerfully. “There are a lot of indie companies here, and they have their own creator/directors…. The Fringe makes making your own work acceptable — both the opportunity and covering (a lot of) the cost.

“This is a bit out of my comfort zone. It’s great!”

Hall is making his directing debut with A Quiet Place, an intriguingly mysterious two-hander by actor/playwright Brendan Gall (Alias Godot). “I love plays that ride or die on their actors,” he says. “This is two people having an experience onstage… Two people in a room with a chair and a lightbulb.”

“It’s a bit Beckett, a lot No Exit,” he says of the existential teaser in which the lights go down on a guy in a blank room, and when they come up, there’s another guy, tied to a chair.

“They don’t remember how they got there, or their names…. They have to figure that out. The play asks more questions than it answers; it’s a puzzle,” says Hall. “Fascinating! A cool little play, and totally do-able at the Fringe.”

He feels lucky to have at his disposal “two actors who are pretty fantastic!” in this Blarney production. Both Braydon Dowler-Coltman and Luc Tellier are, like Hall, actors who have taken up directing (as you’ll elsewhere at the Fringe in To Be Moved and Legoland, respectively). And Hall himself is appearing in Ron Jenkins’ Fringe production of Gruesome Playground Incidents.

“I’ve learned a lot,” says Hall of his new career venture. “I made a lot of mistakes early on. But I’m learning to have my own language, how to communicate with actors. I’d love to do it again!”

“At the Fringe you can just take bigger risks. It’s allowed to try new things!”