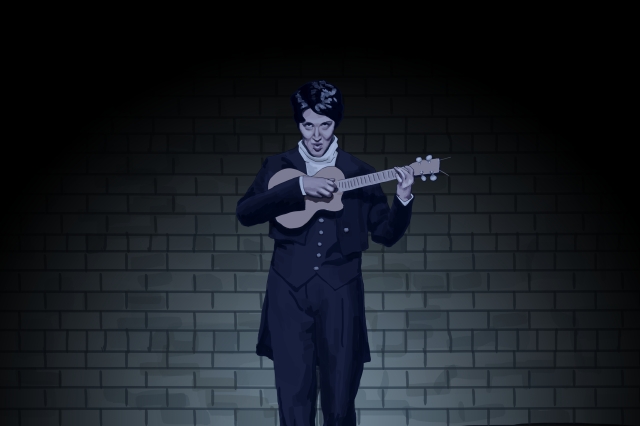 “Everything fun is a little bit dangerous,” proposes one of the eerie songs in Edgar Allan. Exactly. And here’s the show to prove it.

In this unnerving little tale of a boy and his doppelganger, the Brooklyn duo Cold Harts devises a cunning way to knot together the strange, haunted life of Edgar Allan Poe and his strange, haunted stories.

The tie that binds is Poe’s William Wilson, in which the title character is pursued by his double, a man with the same name who thwarts his worst impulses. But there are chilling glints of other Poe stories too in the toxic anatomization of boyhood friendship .

On his first day at a boarding school we meet 11-year-old Edgar Allan, an urchin of terrifying precocity tuned to a sinister frequency and played with glittering mania by Katie Hartman. His goal, he tells us with chilling precision (while accompanying himself on the ukulele) is to be, and remain, remarkable. “It is only a matter of time before they yield to my will,” he says of the lesser beings in the student population.

The uber-mensch kid, is in for a shock. His equanimity is shattered when he discovers another student (Nick Ryan) of equally formidable gifts — and the same name. And a lethal competitive instinct is adrenalized by this grave and mysterious person who talks only in a hoarse whisper.

Corvus and Noctua, as they nickname themselves after the crow and the owl, are wary, and inseparable rivals in a tactical war of one-upmanship that seems to bring out the worst in Edgar Allan.  The performances are funny, dark, and sharp-edged as daggers.

The one set piece in the darkness onstage is an empty oblong door frame. Perfectly Poe. In its sinister way, Edgar Allan plays with the shiver that ripples along along your spine when you look into a mirror and see someone else, or see someone through a doorway and it turns out to be … you.

That double-edged axis of horror haunts the Poe canon. And that’s where this clever little show — playful, dark, and dirty — lives.

I missed this gem the first time around, in 2015, and even its reprieve visit the next winter. Don’t you make the same mistake, I warn you. It won’t follow you around forever.