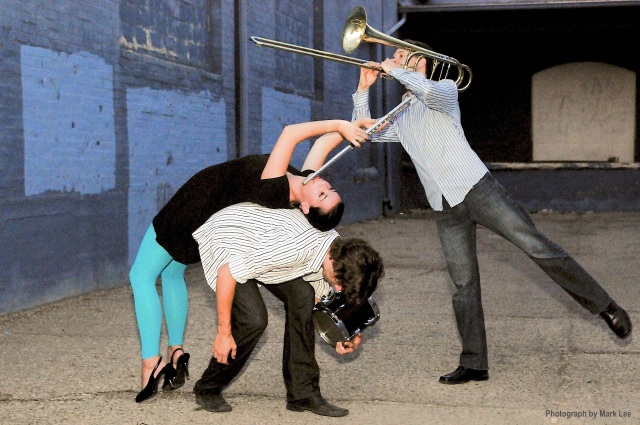 This epigrammatic wisdom sets the tone for an exuberant show in which classical music goes rollerskating, or somersaulting, or hanging upside down. Finally a euphonium players gets to dance: we’ve all been waiting for that.

The Fourth Wall, a three-person American ensemble of trained classical musicians (Hilary Abigana, C. Neil Parsons, Greg Jukes) with an unusually acrobatic skill set, choreographed for comedy, cavort their way around the world through a multi-instrument 15-piece play list. The order is determined by throwing a blow-up beachball globe into the audience; whoever catches it picks the country.

If you have never seen an accordionist, a flautist, and a bass trombonist actually do the tango, while playing Astor Piazzolla’s Bordel 1900 (from his Histoire du Tango, as the cast explains) in a tangy arrangement — and who has? — this is the show for you.

Some of the selections are evidently written specially for these spirited and playful musicians, Hilary’s Hornpipe, for example, to which she contributes while jigging in a chair. When the possibilities include a fully orchestral piece like movement 3 from Ralph Vaughan Williams’ Symphony #7 — in the show to represent Antarctica — the arrangements have to be ingenious to sound full. And they are.

The trio conjures conjures ice and snow on three snowshoe-shaped sleds, in precarious gravity-defying configurations. Occasionally classical musicians are called “rockin” (by themselves usually); rarely do they physically rock.

There’s music you’ll recognize: even if you don’t think you know Chopin’s Minute Waltz you do. There’s music you’ve never heard, like a movement from Moss Garden of the Saiho-ji, a Japanese-sounding piece by Finnish composer Kaija Saariaho.

The Fourth Wall-ers play on everything from bodhrans to boomwackers. Music class was never this fun in school. And there’s a bonus: a whirlwind rapping tour through the titles of Fringe shows.

This entry was posted in Fringe 2017 and tagged 12thnight.ca, Edmonton Fringe Festival, The Fourth Wall. Bookmark the permalink.
Loading Comments...