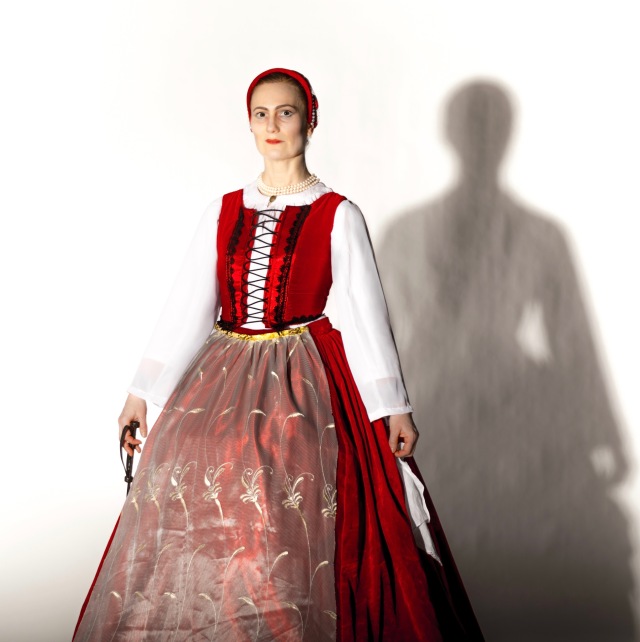 A whispering campaign echoes in the darkness in the atmospheric opening moments of Blood Countess. “Countess Dracula” the voices hiss. “The Countess is a witch!”  Candles flicker across the stage before the lights come up on a regal figure in a red velvet gown who glides around the stage, waltzing.

Blood comes up a lot in this solo biography of 16th century Hungarian aristocrat Elizabeth Bathory by and starring Regina’s Sharon Nowlan: “the blood of nobility,” “the rush of blood,” “Bathory blood wine,” the family brand in vino. But what gets unrolled never returns to the promise of that first scene.

The show seems designed to breathe life into a fascinating historical character with a legendary, possibly trumped-up, record in mass murder for us to assess. What we get instead is a curiously flat modern, written-sounding text, delivered by a character, miked for some reason, who starts with biographical facts and ends up with bland contemporary annotations like “my peers are men; their wives seem to resent me.” Or “I was 44; I was expected to wither away….” Sometimes, the turn of phrase just takes a flying leap out of one time into another: Elizabeth tells us her husband “grew our fortune.”

The historical facts aren’t uninteresting; hey, the daily lives of rich Hungarian noblewomen of the 16th century trailing vampiric reputations aren’t everywhere onstage in Canadian theatres. But the psychology seems generic. And the production hasn’t figured out how to distinguish between the period character who says “we shall dig for the root of the mandragora” and the modern narrator/playwright/character with a perspective on Elizabeth’s trial and imprisonment. “I spent my life believing I was invincible.”

There’s a story waiting to be told in Nowlan’s play. It just needs a more cunning, coherent theatrical vessel to contain it.