Hockey Night at the Pub and Pickle Pub: a 12thnight.ca guest review 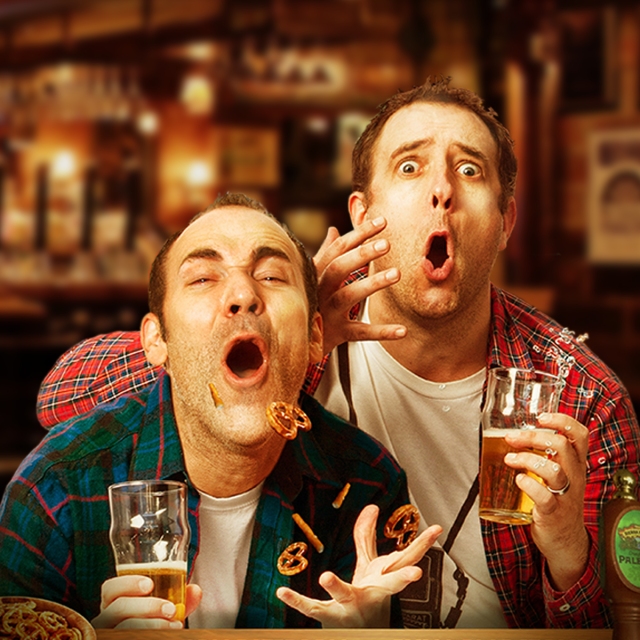 We’re sitting in the Pub and Pickle, a Canadian saloon where the attention of everyone is focused on big-screen televisions.

With McJesus on our side, what could possibly go wrong?

Not that there’s a thing wrong with this romp through hockey fandom from playwright Ryan Gladstone of Monster Theatre. It’s funny, a little scatterbrained, and ridiculously, hilariously Canadian.

Gladstone and actor Jon Paterson play a pair of dedicated hockey fans at the Pub and Pickle who are there to watch the game.

No, that’s wrong. Gladstone and Paterson play everyone on the pub on this momentous day.

There are two hockey nerds playing trivia one-upmanship, a couple on their first date, a pair of chain-smoking cougars agog at the sexual possibilities available, two oldtimers reliving hockey’s glory days, a pair of very drunk fans who have been at it since 5 a.m., a Canadian and an American debating the merits of the game on either side of the border (do you realize it costs eight bucks to go to a Coyotes game?).

The result of all of this is inspired silliness with both performers happily flubbing the occasional line and turning to the audience for help and/or advice. We’re also asked to cheer on the Canadians and boo the Americans as the fantasy game unfolds.

If you have ever watched a game in a pub – and who hasn’t? – you’ll happily recognize these characters. They’re exaggerated to be sure, but not by much.

Marc Horton is a former sports columnist and entertainment writer with the Edmonton Journal. He is a season ticket holder with the Oilers and only last week predicted his team would win the Stanley Cup this year…and next. He was in a pub at the time.

This entry was posted in Uncategorized. Bookmark the permalink.