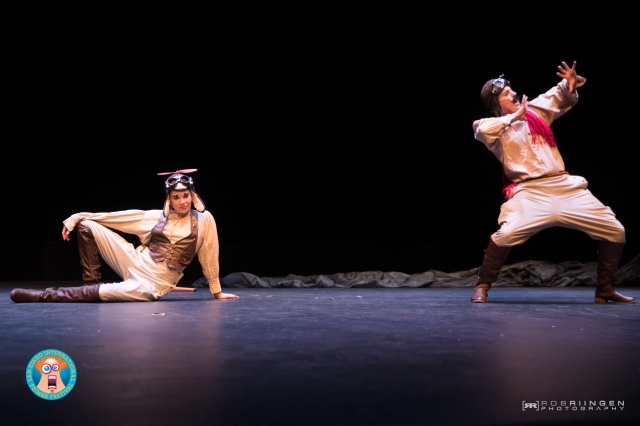 An airplane crashes on the stage. Beau (David Cantor) helps his co-pilot Aero (Amica Hunter) to her feet and they do what any incompetent aviators would do. They play with balloons and soda crackers, they battle and contort themselves, they dance, they flirt, they throw silent tantrums.

We would watch these lithe, delightful clowns do just about anything.

Cantor and Hunter, from Portland, were the talk of last year’s Fringe with Bella Culpa. Beau & Aero: Crash Landing is another energetic and hilarious blend of old fashioned vaudeville and modern clown.

Swiss circus master James Thierrée, grandson of Charlie Chaplin and great-grandson of Eugene O’Neill, is an inspiration for Cantor and Hunter. Their work is silly and sophisticated at once, and as much fun as you can have in a theatre.

They know just how to involve the audience in their antics, with a hint of naughtiness and a lot of charm.

This entry was posted in Fringe 2017 and tagged 12thnight.ca, A Little Bit Off, Beau and Aero, Edmonton Fringe Festival, Todd Babiak. Bookmark the permalink.