Romance in the Regency: One Man Pride and Prejudice, a guest Fringe review by Marc Horton 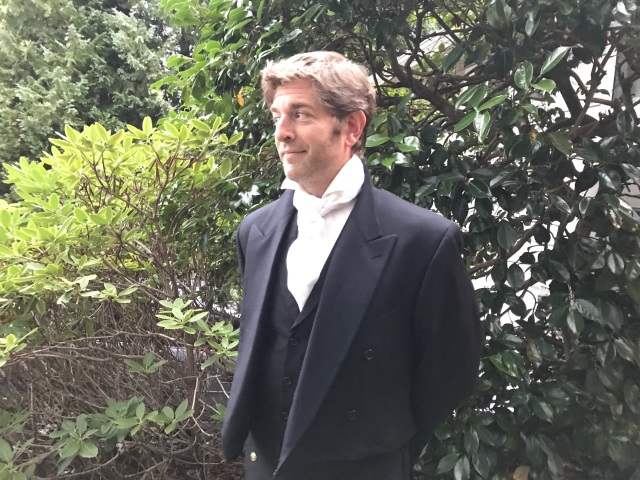 It is a truth universally acknowledged, that a single actor in possession of a good story must not mess it up.

Victoria actor Charles Ross has a good story in Jane Austen’s Pride and Prejudice and, yes, he does mess it up.

Perhaps not fatally so, but there are challenges aplenty in this production, despite Ross’s evident charm as a performer and his obvious affection for the source material.

Indeed, it is also a truth universally acknowledged that Pride and Prejudice might be one of the best and most ironic rom-coms ever written, although you wouldn’t necessarily know it from this one-man show.

There are some one-liners that work, but for my taste too many of them were of the anachronistic variety. For example, using phrases like WTF, most certainly unknown in Regency England, is jarring rather than comic. The laugh when it comes — and it did at the performance I attended — is cheap.

And the audience that laughed at that line was prepared to laugh at just about anything. These were people who, for the most part, loved Jane Austen, and knew Jane Austen.

But if you don’t know her, you will be confused by the welter of characters that Ross attempts to bring to life on the stage. I’ve read the book a half-dozen times and struggled to figure out which one of the Bennet sisters was delivering the lines.

I pretty much had Elizabeth down pat, but couldn’t tell my Janes from my Marys, my Kittys from my Lydias.

And if the girls were confusing, don’t get me started on the fog created on stage by the George Wickhams, William Collinses,  Edward Gardiners and Charles Bingleys. I never did get them straight. Mr. Darcy, for the most part anyway, is clear.

Ross’s cause might be aided if he slowed down his delivery. When he starts in on these characters, it’s more than simply rapid-fire; it’s rat-a-tat-tat with Ross taking no prisoners. Too often it is incomprehensible. I’m sure I wasn’t alone in bafflement.

– Marc Horton is the former books editor at the Edmonton Journal. Of all the Jane Austen novels, Pride and Prejudice is his favourite.