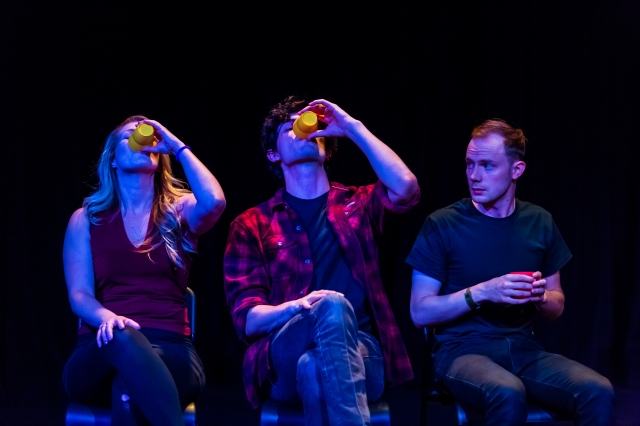 Exposés of the arsonist Hollywood machine that makes, then torches, its child stars, ashes to ashes, are a dime a dozen, onstage and screen. Pompeii, L.A. is one of those, if more striking than most for the fragmentary blam-blam of its scenes.

But wait; 5, 4, 3, 2, 1, we’re rolling. With its weird apocalyptic vision this 2013 fantasy/satire by the Australian playwright Declan Greene, Pompeii L.A. is after something more.

It conjures an America built on a fault line, with a volcano ominously throbbing underneath. The distinction between real and fictional has been incinerated, dusted with ash till it never existed. This makes things a lot more interesting, as you’ll see in the Cardiac Theatre production directed by Harley Morison.

It starts playfully with a question: “is there any hope?” Judy Garland (Elena Porter) is being jokey with a nervous make-up girl (Nikki Hulowski), before a Johnny Carson appearance. This scene bleeds into the scene where the girl arrives home to find her terrified boyfriend wrapped around a table leg. Real? Cinematic? A false distinction in Pompeii, L.A.

Cut to rehearsals for a catastrophe movie about an eruption and horrific car crash in L.A., getting rehearsed. A starlet (Hulowski), wildly miscast as an environmental scientist can’t learn her lines. One of the stars (Morgan Grau) storms out. There’s a scene with an actual catastrophe and car crash. Or are they actually actual? Impossible to tell.

Similarly, hospital scenes move in and out of layers of fantasy: the former child star Johnathan Brandis (Sam Stralak), who’s become the anonymous go-fer who can’t remember his name on the set of the catastrophe movie, is alone. He’s laid out, hallucinating a visit by a grotesque president. Wait, euwww, it looks like a president we know….

The actors, who change characters constantly, commit to every layer of reality (or lack thereof). But in an effort perhaps to give them equal credentials, perhaps, I wonder if the production needs to linger over the scenes, rather than quick-cutting between them and superimposing them. What should flicker you dizzy seems more like a series of close-ups.

But the vision is there, and well worth catching in this ambitious production: Kafka with glamour, a dream without a wake-up clause, fantasy with nothing substantial to extrapolate from. That’s the trouble with living on a volcano. Well, that and the heat.