What dark secrets lurk under the small town idyll? Rapid Fire Walk With Me improvises a mystery series a la David Lynch 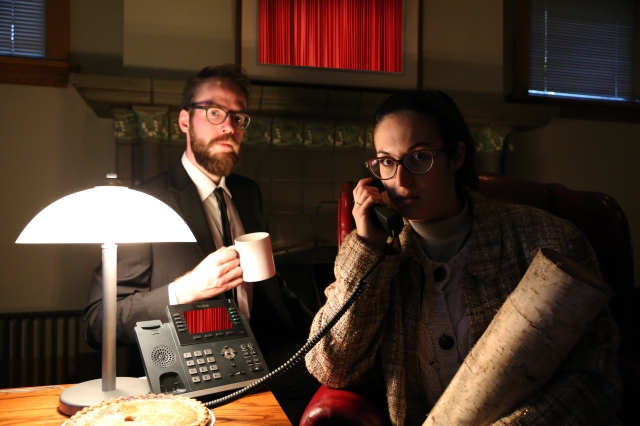 Rapid Fire Walk With Me. Photo by Andrew Paul.

“Through the darkness of future past/ the magician longs to see/ one chants out between two worlds/ fire walk with me….“

In the 1992 David Lynch horror film Twin Peaks: Fire Walk With Me — a prequel to the celebrated television series that unnerved us all — worlds, realities?, intersect and collide in mystifying ways. And so do the past, present, and future.

The surreal Lynchian vision is the inspiration for Rapid Fire Walk With Me, an improv series that runs every Saturday night in October (starting this very Saturday) at Rapid Fire Theatre’s Zeidler Hall headquarters in the Citadel.

It’s the brainchild of Paul Blinov, one of the company’s elite Chimprov improvisers, and two of his Rapid Fire cohorts Bob L’Heureux and Tara Koett. Says Blinov, “we tried it out at the Bonfire Festival,” Rapid Fire’s annual repository for “”our weirdest ideas.”

Here’s the Blinov proposition: Improvisers, who create storylines on the spot from cues, have a natural affinity to the playful illogic of surrealism. “Our interest in playing with ideas of surreal” led the Blinov trio to the creator of Blue Velvet and Mulholland Drive. He is, after all, a master of “getting the pieces of a narrative and putting them together in the wrong order.” In many ways, Lynch’s free-associative story-spinning and imagery, unhinged from the linear, sits with uncanny ease in the world of improv, Blinov has found.

“At heart David Lynch is an improviser!”

It’s no accident, Blinov argues, that favoured Lynch settings are “small idyllic towns with dark secrets … a stable structure to depart from, a veneer of the normal peeled back to unearth darkness and strangeness.” Maybe that’s why Lynch movies retain a spontaneous feel, Blinov muses, “the sense of assembling a mystery as they go … with some narrative satisfaction at the end.”

Blinov cites a Lynch anecdote about seeing a bare-branched tree in the small-town backyard of his boyhood — and suddenly realizing it was swarming with ants everywhere. “Super-normal surfaces that turn out to be super-strange….”  In Lynch’s book Catching The Big Fish, an exploration of creativity through meditation, the auteur argues that “you have to go deep to let yourself find the big fish,” as Blinov puts it. In filming Twin Peaks, the character of the evil Bob was improvised in an instant: catching a glimpse of a  make-up man in a mirror and opting spontaneously to include this non-actor in the narrative.

As a model for long-form improv, it’s tricky, Blinov says happily.  “The narrative isn’t A to B, pieces of information are in the wrong order, or withheld; it’s the journey rather than (the arrival) at B….” He argues, though, that all improv grapples, moment to moment, with “what turns out to be a red herring.”

Since his graduation from Theatresports to long-form Chimprov initiatives, Blinov, a Fort McMurray native who arrived here to go to the U of A, has been part of such experimental ventures as The Imagineers, Gossamer Obsessions (with Amy Shostak) and Sneak Peek (with Rapid Fire artistic director Matt Schuurman and others). In the latter, the improvisers show up with a movie trailer each, the audience chooses, and they improvise the entire movie.

With this new venture, improvising à la Lynch, the marriage of scary-dark and funny is a tricky one, concedes Blinov, “There’s something inherently funny in watching people have to stick to their guns. Or abandon their guns!” And the unexpectedness factor increases exponentially with a large-cast show. For the Saturday series this month, a company of 14 performers will yield a weekly ensemble of seven, depending on availability.

For the Bonfire outing of Rapid Fire Walk With Me, earlier this year, “anyone (in the company) could sign up,” says Blinov, an 11-year improv veteran who divides his time between teaching improv workshops and a job at the Art Gallery of Alberta launching spontaneous conversations about visual art with the public experiencing it there.

Some improvisers who signed on for the Lynchian experiment at Bonfire were, like Blinov, knowledgeable David Lynch aficionados. Some were only sketchily acquainted with the sacred canon. “We got everyone in a room and watched clips from across film and TV, to get the feel of the tone. ‘These are the touchstones’.”

“They occupy their own territory,” Blinov says of the Lynch oeuvre.  “Whatever made them powerful still lands….” Rapid Fire Walk With Me isn’t a copy or a parody; it’s not to Lynch what Hitchcock homages are to that great men. “We have to create our own authentic world…. It’s not just cherry pie and solving a mystery.”

For the evening’s cue each week, “we’ll ask the audience for an image from a dream or nightmare.” After that there’s just no telling where the narrative may go, in what strange byways it may linger, what “detours” it may take, what minor characters may find themselves on the narrative engine. Blinov uses the word “exciting” to describe what more timid souls might be inclined to call nerve-wracking.

“I always feel nervous when I go onstage. It’s about using nerves to your advantage!”

Rapid Fire Walk With Me]