A horror show from history: Dead Centre of Town is back to haunt the Fort 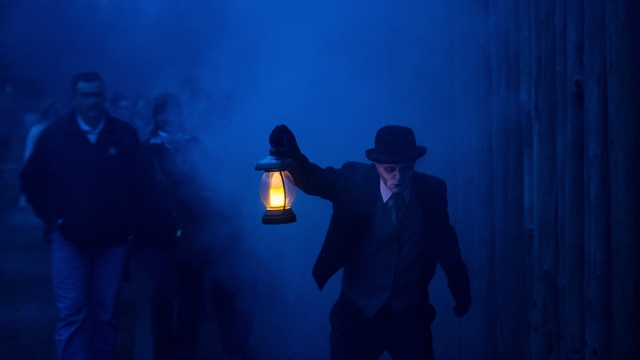 It’s the chilly season when the veil between the present and the past is at its thinnest. And this, my friends, is a haunted place.

Catch The Keys Productions is once again leading us on an expedition to exhume Edmonton’s long-buried stories on location. Dead Centre of Town, at the 1920 Johnny J. Jones Midway in Fort Edmonton Edmonton Park starting Friday (the 13th, surely no coincidence), is the 10th anniversary edition of original creations — researched and custom-made for a site  where our ghosts linger and our dark collective secrets lie composting.

A decade ago, Megan Dart and her sister Beth were living across the street from The Globe, a bar on the corner of Jasper Avenue and 109th St. “It was the site of one of the first mortuaries in Edmonton,” says Dart who discovered it was surrounded by coffin-building and embalming establishments during the First World War. In the macabre local lingo of the time, that corner was “the dead centre of town.”

“We knew the manager of the Globe,” says Dart. “She said ‘we’ll give you the bar for one night and see how it goes.”

A fateful offer: an Edmonton theatre tradition was born that Halloween night. Dead Centre of Town started, modestly, with two technicians, a $500 budget, and a cast of five, a couple of whom (Adam Keefe for one) are still with the annual ventures into Edmonton’s surprisingly strange and lurid past. “150 people showed up, so it was technically sold out!” says Dart.

“I look back it now, at how quickly we put it together, honestly just a couple of weeks. And I go back to the script and see something I wouldn’t share with anybody!” Dart laughs. “Site-specific, yes,” she laughs, “though we didn’t have the word for it. We just knew we didn’t have the money to rent a theatre!”

She remembers that as soon as that experimental first show ended at the Globe, “people were out on the dance floor, in their Halloween costumes, drinking Jaeger shots.”

Since that darkly festive debut Catch The Keys has specialized in immersive, site-specific theatre that, as Dart puts it, “offers something immediate to put the audience inside the experience.” Dead Centre of Town has sent shivers up the collective spine with horror stories — true ones and urban lore —  in such ghostly locations as abandoned trainstations, nightclubs that were once vaudeville houses, tinsmith shops-turned-theatres, the long derelict upper floors above the Whyte Avenue cafe Block 1912. And for the last three years, Dead Centre has unleashed its dark vision at Fort Edmonton, “Edmonton’s only living museum,”  on the banks of the river.

One year we followed characters along 1885 Street, in and out of the schoolhouse, the saloon, and other buildings. “We ran three km. of cable that year,” Dart recalls of the extreme technical challenges for scary lighting and sound off the grid.

One year we found ourselves in the Selkirk Hotel. One year we went into the fort itself and, to an eerie soundtrack of coyotes, met such horrifying characters as the first man hanged in Edmonton who had cannibalized his wife and seven others while under thrall to a demonic spirit. 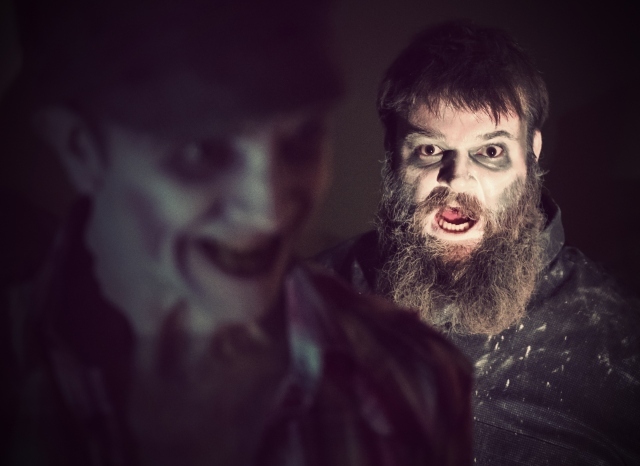 This year, prepare to be unnerved, and possibly out-and-out terrified, 40 at a time, in the skeletal circus midway at Fort Edmonton Park. Beth Dart directs a cast of 15 in “a series of vignettes and short scenes inspired by true history,” as playwright Megan puts it. “We’ve been dreaming of that midway ever since we started coming down to the park.”

“Amazing how many characters met their end in untimely and unsavoury ways,” Dart says cheerfully. “Edmonton was a bustling city between 1918 and 1926,” and rich in horror story potential, she’s found. Ten years of research into a civic history few of us know have unearthed a startling vein of the weird, the violent, the morbidly fascinating, as she says. “Edmonton was a rebellious young frontier town. So much happened here, a rich Indigenous history, the fur trade, the railroad….”

Inspired by this year’s midway setting, “we’ve married each story to a circus act,” Dart says of the 2017 edition. “You’ll see an aerialist, a snake charmer, an escape artist….”

We’ll meet Filumena Lossandro, the only woman ever hanged in Alberta (heroine of John Estacio’s opera of that name). We’ll be on hand for the strange disappearance of teacher Felicia Graham. One of Dart’s own favourite stories, a real winner, is the 1926 arrival in town of the Sells Floto Circus. “As they set up, 14 elephants got loose and stampeded down Jasper Avenue,” Dart explains, with delight. “Eight of the 14 were captured immediately; the rest kept going, led by the smallest elephant Mad Mary…. They rampaged through town till she ran out of steam.”

“Our acting company doesn’t shy away from a challenge,” laughs Dart. “We’ve thrown some wild ones at them this year! And the run is  34 shows, two a night (7 and 9 p.m.), outside in the elements and within the grasp of the audience…. We’re the Iron Man of theatre!”