It’s the small stuff that counts: The Aliens, a review 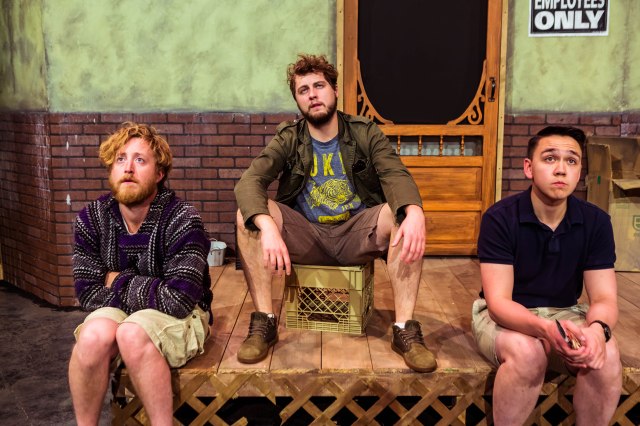 When stubbing out a cigarette or trying to bring on a sneeze count  as flurries of activity, you’re in the brave theatrical world of Annie Baker. Kicking over a plastic chair? Downright revolutionary.

The fallback term ‘slacker’ barely skims the meticulously detailed surfaces of the characters we meet in Baker’s The Aliens, hanging out behind a small-town Vermont coffee shop. Taylor Chadwick’s What It Is production — a theatre company name that seems particularly à propos in the case of Baker’s uniquely subtle theatricality — opens Theatre Network’s Roxy Performance Series.

It’s Edmonton’s first chance to see this mesmerizing 2010 play by the young American Pulitzer Prize winner (The Flick, Circle Mirror Transformation, Body Awareness, John). And see it you really should, since you’ll be seeing three thoughtful, observantly unforced performances by a trio of fine young Edmonton actors. And you’ll be seeing them in a production that lets the meaning and feel of the piece sneak up on you.

This kind of dot by dot naturalism isn’t as easy as it sounds — not in an art form like theatre that relies heavily on stylization, the big strokes. Baker’s art is in the small strokes, and this production knows it.

Jasper (Evan Hall) and KJ (Chris W. Cook) hang out on a more or less permanent basis, smoking, drinking magic mushroom tea and ruminating at the picnic table out back of a small-town Vermont cafe, next to the garbage and recycle (realized in impeccable detail by designer Liza Xenzova).

There is zero exposition and neither guy is exactly a windbag; au contraire, the dialogue is, mainly, unspoken (if that isn’t an oxymoron), a matter of a few sparse words and pauses that seem to go on forever. But we do learn that at age 30, they’re drop-outs, underachievers in the scholastic department with better things to do. Things of a creative nature. Like song writing and being in a band, if only they could settle on a name (there’s a long and amusing list of rejected possibilities, among them Hieronymus Blast, The New Humans, and The Aliens, named for a Charles Bukowski poem). They actually perform oddball songs by a trio of writers

Or, in the case of Jasper, writing a novel (also named for a Bukowski poem), trying to use seething resentment about a recent breakup to turn loss into something intense on the page.

They’re not without talent; they’re … well, what? Stalled, I guess. Short on translating talent into something with forward momentum. In short, they’re aliens, outsiders looking in. And they’ve found models, like Bukowski, Kerouac, Millier, who validate the kind of creative alienation they’re into.

In other hands than Baker’s, they’d have satirical targets on their backs; her weird and distinctive kind of comedy treats them with considerable affection. And Cook and Hall are on the money, both individually and in the friend chemistry that makes them alert to microscopic changes in the vibe between them.

They seem to be zoned out, suspended in an ether of non-activity that makes standing up seem like the charge of the light brigade. But Hall as Jasper, the broodier of the two, retreats into silences with a kind of angry pulse to them. His pal KJ, the shroom tea-drinker who lives with his new-age-y mom and has a history of “breakdown,” has a kind of aimless stoner smile to his inward gaze. But when it comes to appreciating his friend’s creative output, he’s there; he listens to Jasper reading his latest chapter with unexpected focus. 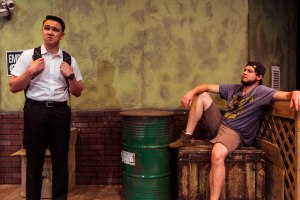 The arrival on the scene of a young cafe employee clutching a garbage gives them an audience beyond themselves. Evan, the nervous loner high school kid sent to remind them that it’s an “employees only” space and they have to leave, is played with surpassing awkwardness by the terrific newcomer Michael Vetsch, who has the general demeanour of an anxious beagle and holds in trust until further notice he furrowed-brow record for the season. 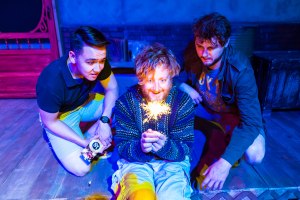 KJ and Jasper move on to offer their fellow misfit and acolyte a cig, and include him in their non-activity. I’m still smiling, in a wincing sort of way, at the memory of their July 4 “celebration.” Evan’s life is changed.

Things take a surprising turn in Act II. Will this subtly drawn world of tiny details and inconsequential throwaway exchanges be elastic enough for an uncontainably large, tragic event? Chadwick’s compelling production makes bold choices; you can imagine others, but his do work. You’ll see; I mustn’t say more.

The Aliens does something radical; it replaces “larger-than-life” with “as small as life.” But as this strange but strangely familiar play captures, life keeps it comin’, in waves, and thoughts, trailing inconsequential fragments of dialogue. Don’t sweat the small stuff, but it’s the small stuff that counts.

Theatre: What It Is Productions, in the Roxy Performance Series

Where: Theatre Network at the Roxy, 8529 Gateway Blvd.