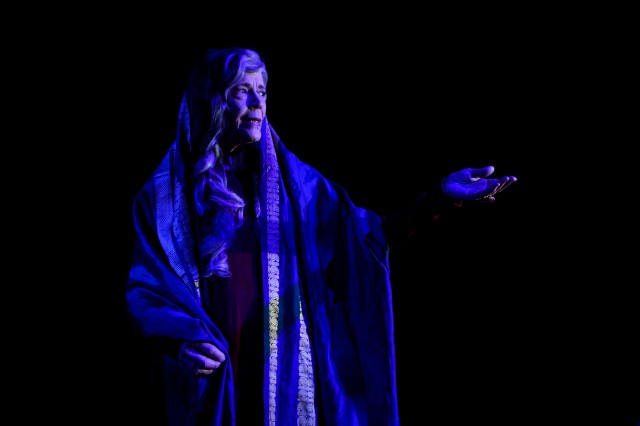 The star of the famous story gets top billing and a lot of press. And he always has, being the Son of God and starting a world-wide religion and all. But you don’t hear from his mom in any of the usual “impeccable sources.”

Mary was there, after all, as her son Jesus acquired divinity, became The Son, and suffered an agonizing death. In the play opening  Northern Light Theatre’s 42nd season Friday — adapted for stage by the Irish author Colm Toíbín from his own Booker Prize-nominated novella — we’ll meet a mother with a point of view and a grievance. And we’ll hear Mary’s own spirited and highly skeptical version of the events that led to the crucifixion and the resurrection.

“I’m attracted to it,” says Holly Turner, who stars in The Testament of Mary, “because of the idea that there is this story in the world that everybody accepts as true…. Here is another perspective!”

“And in this world of fake news …”  Turner pauses and smiles. “I don’t want to offend anyone,” she says, “but Mary is saying to the followers, ‘guys, you created this story!’”

It was Turner who approached Northern Light’s Trevor Schmidt with the idea of doing the play. After all, it was Schmidt who cast the thoughtful, quick-witted Turner in a play a decade ago, at the very moment she was retiring her career as a federal tax lawyer and returning to her original love, theatre.

In fact, Turner, now 70, appeared with him onstage in The Busy World Is Hushed, which explored religion, faith, suffering, and love, all subjects under the gun in The Testament of Mary, albeit in very different ways. Turner played a biblical scholar with a secret sorrow, who hired Schmidt’s character, a young man adrift, to ghost-write a book about a newly discovered gospel.

Turner, a Philadelphia native who grew up in Pittsburgh, had originally arrived here from New York in the late ‘60s — and by a route no one could reasonably have predicted.

As she explains, the summer she’d graduated from the Neighborhood Playhouse she’d had “an amazing break.” She landed on Broadway as Henry Fonda’s daughter in “something eminently forgettable” called (she has to think for a moment) Generations. “A sitcom, maybe a little ahead of its time,” Turner grins. “The guy who played my husband wore beads….”

“Anyhow, the result was I got a good agent,” and landed a touring production of Barefoot in the Park that went to Buffalo, and caught the eye of the Citadel artistic director for the production of that Neil Simon comedy that opened the ’67-’68 season. “I came here because they offered me a small part in Hedda Gabler, too, and I didn’t have anything like that on my resumé,” says Turner, with a cheerful shrug. “Then I met my first husband and stayed in Edmonton.”

The Turner story is full of bold turns like that. “I worked in theatre, off and on for a while,” she says. By the mid-70s, she decided to go to law school (she has a master’s in tax law from the U of A). “I think maybe I wanted to something more predictable. … As it happens I think I got out of theatre just when it was really taking off here.”

“I kept thinking I’d get back to theatre, but I just didn’t have the time to do the auditions.”

It was just after she’d retired from federal justice department that Northern Light suddenly appeared on her resumé. After that she did a season with the Freewill Shakespeare Festival; she’s appeared at L’UniThéâtre, the Citadel, Wishbone. She’s done Fringe productions of Love Letters and The Year of Magical Thinking, a solo spun from Joan Didion’s memoir.  She’s written plays, too; The Accident was workshopped at SkirtsAfire in 2015.

When Turner discovered Toíbín’s novella, and got fascinated, she tracked down his agent, and acquired two quite different versions of a script that had premiered in Dublin before it was remounted in London and then New York — a highly unusual production, incidentally, in which the Irish star Fiona Shaw appeared completely nude at the end, and shared the stage with a live vulture.

No birds are involved in the Northern Light production, Turner assures. But Schmidt’s set is “unusual,” she says mysteriously. 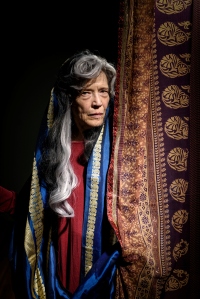 The Testament of Mary finds Mary post-crucifixion, being kept in a safe place under the pretext, as Turner puts it, that “they’re looking after her in her aging years.” But now there’s an orthodoxy to fortify. The apostles who visit and interview her for the gospels they plan to write “don’t want her going around telling people her version of events, speaking to “what I did and what I saw.” After all, her version of events has more to do with the earth than the divine.

In the play “Mary knows she has an audience,” says Turner. “And there’s (both) a conspiracy aspect and a confessional aspect…. She has a need to confess to her own part in what transpired.”

As you might expect The Testament of Mary is a challenge to the Catholic tradition that  reserves a specially anointed place for Mary as the Mother Of God. “This is not the party line,” as Turner puts it. And the play has provoked protests in both London and New York.  Turner seems a little disappointed that a proposed protest here by a Catholic outfit, has been withdrawn.

Solo shows can make for lonely cast parties. Turner laughs. “In The Year of Magical Thinking, I sat in a chair for 80 minutes, and the play was circular…. Whereas this one is linear, it’s based on a famous story, there’s blocking (stage movement). And there’s some comfort in that.”

Besides, Turner finds Mary “a very appealing woman” to inhabit. “She’s smart, she’s a player. She’s forced to make some hard choices. I like her….”

The Testament of Mary