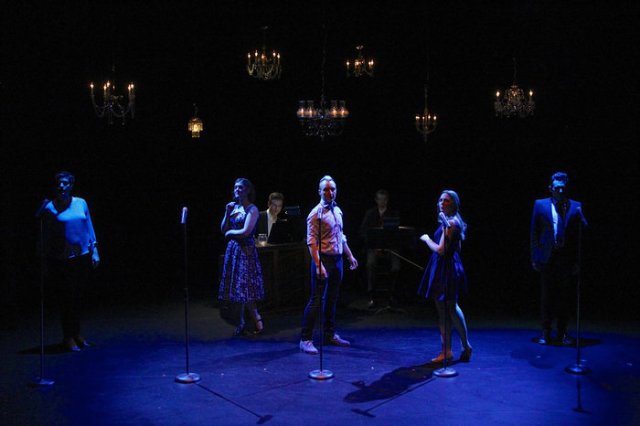 Three of Edmonton’s most inventive little indie theatre companies are forming a trio — in a new umbrella ensemble that will produce a subscription season of shows at the Varscona Theatre.

Together, Plain Jane Theatre, Bright Young Things, and Atlas Theatre are the new Varscona Theatre Ensemble. Their artistic directors, Kate Ryan, Belinda Cornish, and Julien Arnold, along with producer Jeff Haslam, are long-time Teatro and Varscona faves and collaborators both on and behind the stage. They’re “a family of artists,” as Ryan puts it. “We know the theatre, and the audiences.”

Their connections are everywhere in the joint season they’ve planned. But first, they introduce the new Ensemble at The Boo! Revue, an original creation of the spooky persuasion Sunday night at the Varscona. Ryan and her Ensemble cohorts  have combed the repertoire for songs, scenes, and characters that speak to Halloween: witches, monsters, ghosts, villains of every stripe, miscellaneous creatures of the night, the neurotic, the misunderstood, the gleeful.

Doubt not that you’ll be hearing that famous Phantom of the Opera arpeggio or The Legend of Sleepy Hollow, my friends. The Great Pumpkin will not be absent. “Cats will be harmonizing and skeletons will be tapping,” Ryan promises.

The troubled witches of Wicked and Into The Woods will air their grievances. Naturally, there’s a big number from Sweeney Todd. More unexpected is an aria from the Benjamin Britten opera The Turn of the Screw, and Rossini’s Duetto Buffo Di Due Gatti (The Cats’ Duet), which consists entirely of the word “meow.” Louise Lambert sings Miss Hannigan’s snarly lament from Annie.  Singer-songwriter Andrea House is writing and performing a new song for the occasion.

Ryan has assembled a large cast of elite Edmonton musical theatre talents. And there are up-and-comers too: the cast of Victoria School’s upcoming production of Shrek the Musical.

There’s a silent auction with jewellery, entertainment tickets, and artwork by Jason Carter.

As for the Varscona Theatre Ensemble season ahead, it opens Nov. 23 through Dec. 2 with Bright Young Things’ production of Our Man In Havana, a stage adaptation of the zany Graham Greene spy thriller, set in ‘50s Havana, in which an English vacuum cleaner salesman pretends to be a spy as a money-raising venture. Kate Ryan of the Plain Janes directs the four-actor production starring Mark Meer, Belinda Cornish, Mathew Hulshof, and Ian Leung.

The Plain Janes, who specialize in the neglected and/or undiscovered reaches of the musical theatre genre, were thwarted once before in their bid to mount Women On The Verge Of A Nervous Breakdown. This time, it’s happening. Ryan directs the high-speed musical comedy by The Full Monty team of David Yazbek and Jeffrey Lane musical comedy, spun from the Pedro Almodovar movie. Her production, starring Jocelyn Ahlf, Jason Hardwick and Madelaine Knight runs Feb. 15 to 24. Cornish will design the set.

Atlas Theatre revives Lee Blessing’s Going To St. Ives, in which a civilized encounter in an English country home escalates in surprising ways into an examination of global politics, moral responsibility, the legacy of colonialism. Arnold directs the production, running April 5 to 14, that stars Cornish and Patricia Darbasie.

The plays may be very different. But what the companies have in common is a theatrical sensibility, says Haslam, “the emphasis on the actor and the word…. They do plays where people actually talk (or sing) to each other!”

A series is “less ad hoc, easier to market and sell” than a single indie production, as Haslam says. And the new umbrella group will share resources. “It relieves the administrative burden of these artists, the blockade between them and their work.”

Tickets for The Boo! Revue: yeglive or at the door. $5 from each ticket goes to the Red Cross.