Beware the Jabberwock: the Old Trout Puppet Workshop is back 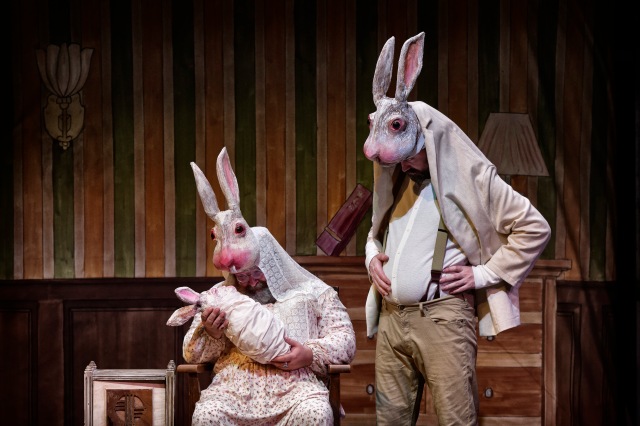 Beware the Jabberwock, my son!/ The jaws that bite, the claws that catch….

You can’t help noticing. There’s a storybook rabbit on a chair, head only and larger than life, gazing balefully into the mid-distance. His body is nowhere to be seen. Uh-oh. Has the Jabberwock come and gone?

And centerstage, is a mysterious wonderland of Victorian frames hung with huge canvas rolls of painted scenery and ready to be scrolled vertically, on pulleys, by real live humans.

Yes, my friends, the Old Trout Puppet Workshop is back in town — at the theatre where they’ve unleashed so many of their dark, strange, imaginative initiatives in puppet/human collaboration. These playful connoisseurs of puppet possibility, still Calgary-based in theory but assembled from across the country in practice, are ensconced at Theatre Network to premiere a new show.

With Jabberwocky, opening Thursday at the Roxy on Gateway before it goes to the Cultch in Vancouver and on to European destinations, they’ve lit on a lilting nonsense poem by the eminent Victorian fantasist Lewis Carroll. Jabberwocky the poem sits in the upside down world of Through The Looking-Glass And What Alice Found There, puzzling Alice and blithely eluding every attempt to “translate” it definitively. Which is one of the things that most attracted the Trouts to it in the first place, as a trio of the troupe’s founding fathers muses on a dinner break this week.

“It’s mysterious,” says Pityu Kenderes. “It allows for a broad interpretation,” says Peter Balkwill. “The words sound like the creatures.” Says Judd Palmer, “as puppeteers, we try to reinvent puppetry every time out — or does that sound arrogant?” he looks at his Trout confrères. “‘Reimagine’ puppetry,” amends Balkwill.

Which is, in either case, something the Old Trouts have been doing, show after show, ever since they gathered at the Palmer family ranch in southern Alberta on the eve of Y2K in 1999 to create their own kind of puppets to star in “a metaphysical Punch and Judy show for adults.” In The Unlikely Birth of Istvan, The Old Trout Puppet Workshop was itself born. 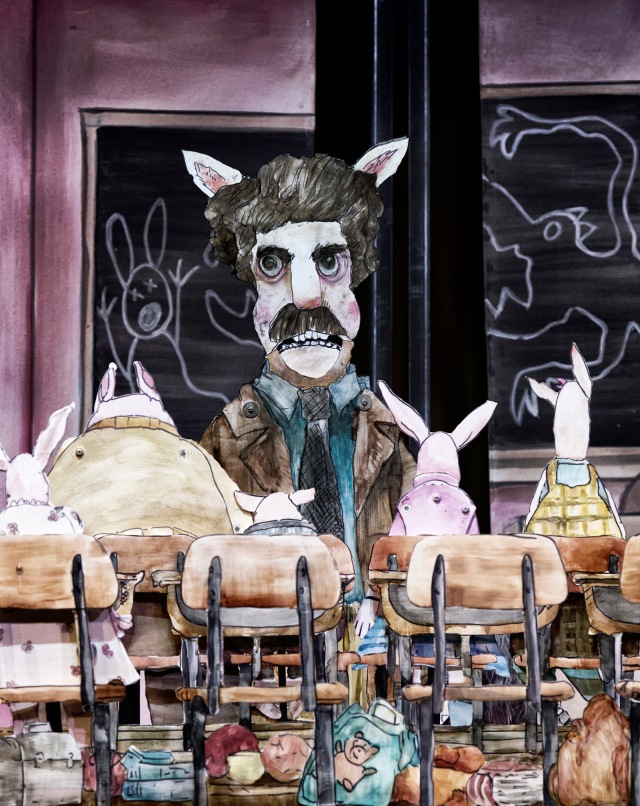 Jabberwocky is alluring to the Trout mind. “It’s the nonsense-ness of it,” thinks Palmer, an illustrator by trade and the prime writer of the three (Kenderes is a originally a sculptor, Balkwill an actor with a specialty in masks). “It’s the way an epic heroic tale, of a monster-slayer, is (told) in nonsense…. It’s nihilism, with a sense of humour.” The quixotic Palmer and his Trout cohorts love that mixed sense of existential dread and absurdity.

The Trout aesthetic is forged in it. For them puppets have always been star players in a sort of existentialist nightmare. They’re inanimate objects  — sometimes exquisitely crafted, sometimes as simple as a couple of twigs and a stone — who come mysteriously to life. They breathe with the complicity of humans, and expire at their whim. Eyes open, they perpetrate terrible acts of violence on each other; they’re subject to egregious acts of brutality. Abandonment issues, premature burial…. no, it’s no carnival of chuckles to be a puppet. Dimpled smilers need not apply.

“What I really like about it,” says Palmer of Jabberwocky the poem, “is that it feels like the founding myth of some strange culture, the story that holds them together, that urges them forward.”

By the end of the Lewis Carroll poem, we get that the hero has slain the fearsome Jabberwock. And there’s general rejoicing: “O frabjous day! Callooh! Callay!” Balkwill says one of the four performers said to him after rehearsal one day, “you’ve made a sad play.” He was bemused. “There’s a possibility in hope in all our stuff, actually,” he says. “We always have that….”

“Puppet shows should be dark,” argues Palmer. “Puppets allow us to have a relationship with the dark!” The Trout canon backs him up. In scene after scene in Famous Puppet Death Scenes, for example, puppets confront mortality and expire. Ignorance is a faux-doc investigating why happiness has always eluded our grasp. The Tooth Fairy is all about the trade-off of childhood innocence for cold hard cash.

The route by which Jabberwocky comes to the stage in a Trout production is as strangely  connected to the big wide world as you might expect. “It started in Lyon, France,” says Balkwill, who has the first go at telling the story. It was at the avant-gardiste festival Les Nuits de Fourvières. And in addition to the Trouts’ Ignorance and Famous Puppet Death Scenes, which both ran there, the festival director co-opted three Trout puppets for The World Puppetry Museum. He  commissioned a new show, too, to be produced in partnership with Republique Theatre of Copenhagen.

Of the dozens of Trout suggestions they pitched, including Oedipus Rex, the festival picked Jabberwocky, thinking perhaps that this would be a version of Alice in Wonderful.

An outdoor location in a former P.O.W. camp and long-range artillery emplacement from World War II, which Palmer went to France to see, was part of the thinking. So was a contribution from a French hip-hop dance ensemble. Long story short, it didn’t happen. And the Trouts, who felt that theatre already had an ample supply of Alice’s, were relieved to go back to their original idea: Jabberwocky. 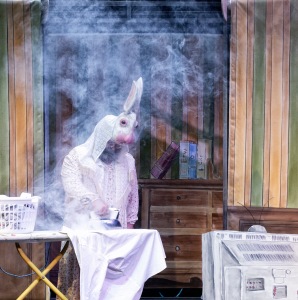 Specialists in theatrical anachronisms, they set about creating a theatre with Victorian-style scenic gadgetry, and incorporating two-dimensional eccentricities of toy theatres of the period. Palmer explains the social practice whereby people would set up cardboard frames in their living rooms, and populate the miniature world with paper cut-out characters stuck to sticks.

“Very Lewis Carroll,” says Palmer. He describes the “scrolling panorama” of the Jabberwocky scenography “as a sort of animated film — with lots of sweating.” With the Trouts, “anachronistic precedents” are a plus.

En route to dinner, they survey the life-sized Victorian toy theatre they’ve built, and muse on the fat rolls of canvas that will unspool and set Jabberwocky in motion. They pay tribute to the lingering inspirations of a Trout field trip of yore — to the whaling museum in New Bedford, Mass (home of Melville’s Moby Dick) where the entire history of whaling is painted on a 1300-foot expense of canvas, cranked by hand by the narrator.

The Trouts look at their own handiwork. “A lot of canvas,” observes Kenderes. “How long is a football field?” Balkwill wonders. None of us knows.

Anyhow, we’ll get to see the mechanism at work. “Why not?” says Palmer. “Puppets are so vividly not the real thing anyhow. They’re an invitation to the audience to actively participate.”

“It’s the collective agreement,” agrees Balkwill. “That’s the alchemy of puppets; we create a turtle out of this block of wood and we all collectively agree that it’s a turtle.” Says Kenderes, who’s also one of the performers in the show, “that’s our Trout slogan: “we’re all in this together.”

That’s exactly what Professor Nathaniel Tweak, a puppet himself, tells us in the, er, dying moments of Famous Puppet Death Scenes.

Created, directed, and designed by: The Old Trout Puppet Workshop

This entry was posted in Previews and tagged 12thnight.ca, Calgary theatre, Edmonton theatre, Jabberwocky, Lewis Carroll, Roxy on Gateway, The Old Trout Puppet Workshop, Theatre Network, Through The Looking-Glass And What Alice Found There. Bookmark the permalink.
Loading Comments...