Away (far away) in a manger: The Best Little Newfoundland Christmas Pageant returns to the Varscona this week 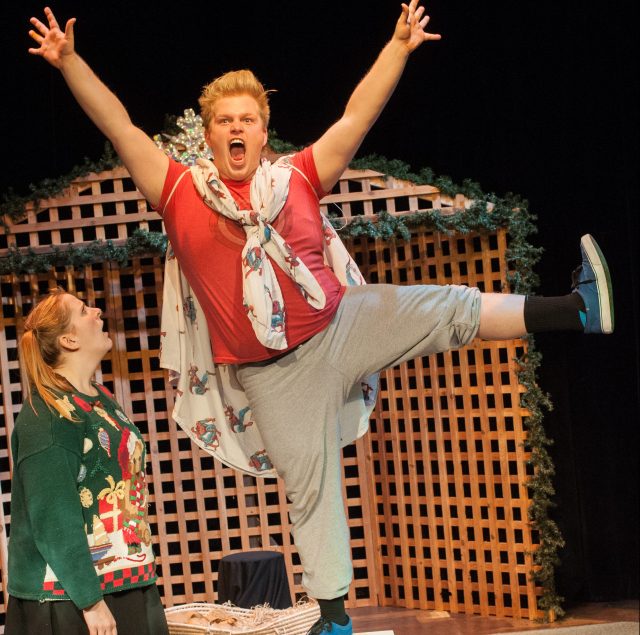 “Don’t get just anyone’s baby for Jesus Christ. Get a quiet one….”

That’s the sage advice from the usual director of the small-town Newfoundland Christmas pageant to her temporary replacement. What Mrs. O’Brien inherits is a lot more trouble than the usual chaos with the angel halos.

Which is the anarchic fun of The Best Little Newfoundland Christmas Pageant … Ever!. The Waiting For Huffman-type adventure, adapted from a much-loved Barbara Robinson novel, takes us into the perennially fraught, lethally competitive, high-Drama world of amateur theatricals.

Whizgiggling Productions, the Edmonton indie theatre named (approvingly) for the Newfoundland term for “acting silly and foolish,” returns from a mostly sold-out tour of small-town Alberta for an eighth annual foray onto the Varscona Theatre stage starting Friday.

The annual auditions, as we discover in a riotous scene, have been infiltrated by “the worst kids in school”; the Herdmans have heard rumours of free snacks. Although these thuggish parties are more than a little perplexed about the pageant plot, including that whole weird business with the Wise Guys, they shove their way into the best parts, mainly by threatening the competition. The citizens are mightily concerned.

Director Cheryl Jameson,  who’s a sparky whizgiggling fomenter herself, was in the show herself, a Spirit of Newfoundland production, in the four years she spent living in that idiosyncratic, warm-hearted, hospitable province — where shed parties and mummering are built into the festive season.

“I arrived from working on a cruise ship, with a Newfoundland boyfriend,” she says cheerfully. “We broke up but I stayed.” Now married to another Newfoundlander, she describes the festive scene at her wedding, in one of the outports, Bar Haven Island. “Word got out,” she laughs. “Somebody put wild flowers everywhere. Another guy filled his cabin with food, left it unlocked, and invited everyone to drop in.”

Strangers made salads and dropped them off at a barbecue at her in-laws place. “My dad went to buy booze at a gas station. And the guy filled his car, and said ‘pay me when you come back’…. It’s that kind of place.”

“I just love it there!” says Jameson, who went back for the 20th anniversary Spirit of Newfound production of The Best Little Newfound Christmas Pageant … Ever!. “When Justin and I left to drive to Alberta I cried all the way across the island.”

Much of the usual Whizgiggling cast returns for the Varscona run. This year Jameson reprises her usual turn as the family bully Imogen Herdman, who claims the role of Mary because she hears it’s a star part. Jameson laughs. “Teachers come up to us after the show and say ‘I taught those kids!’”

Will the pageant turn out to be the worst ever or …? The magic of the show, as Jameson explains, is that something special about the spirit of Christmas gets unexpectedly re-discovered in the course of The Best Little Newfoundland Christmas Pageant … Ever!.

Running: Friday through Sunday and Dec. 20 to 23