Onegin: the country’s hottest new rock musical arrives at Catalyst. Meet the team who created it

An original Canadian indie rock musical arrives on Catalyst’s home stage Thursday. And it trails the kind of buzz and rapturous reviews to fight duels for — not mention a big, juicy, romantic Russian story.

Onegin, the much-awarded creation of Vancouver-based artists Amiel Gladstone and Veda Hille, is an irreverent re-imagining of the Tchaikovsky opera and the 1833 Alexander Pushkin narrative poem that inspired it.

Fuelled by non-meagre lashings of passion, intrigue, vodka, dance, and rockin’ music, Onegin is all about love. And we all know the crazy careening secondary routes that can take. “Characters fall in love, sometimes with the wrong person; characters turn away from love and sometimes it’s irrevocable and they’re filled with regret….,” says the extremely genial and puckish Gladstone, the playwright/director who directs the Vancouver Arts Club commission that premiered in 2016. “The story is so big, but so simple.”

Gladstone says he and Hille were story-starved after Do You Want What I Have Got? A Craigslist Cantata, their quirky hit travelling musical (a collaboration with wry CBC veteran Bill Richardson) culled in a composite way from real-life entries on that sellers’ site. Citadel audiences saw it in the Club in 2014. “It had no narrative,” says Gladstone. “Not only were its characters disconnected, it was about disconnection.” 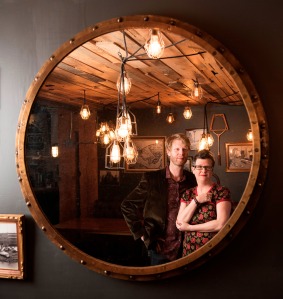 So this time “we wanted full (narrative) consummation, ongoing romance!” Gladstone laughs. And in casting about for a story, they carried with them the thought that “most big musicals are adaptations.”

“We wanted something more linear and romantic,” says Hille, an indie composer/ musician/ writer whose musical credits extend to a startling range of Vancouver bands, styles, and theatrical initiatives. “We looked to the Russians,” for their storytelling verve and for what Hille calls “the contemporary nature of their 200-year-old stories.”

Her first choice, and favourite book? Anna Karenina. She was deterred by the Tom Stoppard movie version, just out. For his part, Gladstone, a prolific playwright and busy director with credits in productions of every size and shape — he’s the founder of Victoria’s Theatre Skam — laughs. “I didn’t really want to think about that ending and how to stage it.”

He proposed Eugene Onegin. Apart from the odd ballet, and of course the celebrated 1879 Tchaikovsky opera (which Gladstone had assistant directed in Vancouver), it was a Russian classic that hadn’t been adapted to death. “The characters are so much how we live today,” Gladstone thinks.

The title character is a rich, bored urban rake from St. Petersburg who inherits a country estate. Onegin’s poet neighbour Lensky introduces him to his fiancée’s family, and her quiet, bookish sister Tatyana falls instantly and hard for him. She writes a beautiful, open-hearted letter to him that he doesn’t answer. Later, he rejects her initiatives in an imperious, wounding way that will have repercussions. He amuses himself instead himself by dallying with Olga, thereby inciting a duel.

And that’s only Act I! Complications ensue, to understate the case. Never underestimate the power of boredom, Gladstone says cheerfully. “Looking for meaning in his own life, Onegin starts messing with other people’s lives.” Gladstone was fascinated by observations from a psychology at a talkback after a performance at Victoria’s Belfry Theatre. “He talked about ennui and boredom and how destructive a force in your life this could be…. Actually, you can literally die of boredom!”

What the collaborators were after was “the essence of the Pushkin,” says Gladstone of the verse novel, published serially and famously written in an innovative, dauntingly intricate rhyme scheme. The intrepid Hille was all for writing lyrics using it. It was  an idea “very quickly abandoned” — on the grounds that “there’d be no payoff,” laughs Gladstone. “I challenge anyone to notice,” he says of the one song with so-called “Onegin rhyme.”

Hille, an intriguingly versatile talent, trained in art and music en route to the indie art rock scene where she’s a star in Vancouver. And she moved into theatre, with such outside Vancouver companies as Theatre Replacement, via gigs as a dance accompanist. She’d written an opera for kids, Jack Pine, which Vancouver Opera took to schools; Gladstone directed. But it wasn’t till after Craigslist Cantata that the musical-writing team really took off.

For years I’d wanted to write a rock opera,” says Hille, whose albums tend to be “long-form song cycles” rather than collections of separate songs. “But I didn’t have the skills. I didn’t know the rules. But Ami really does.…”

On paper you might assume that Gladstone wrote words while Hille wrote music. But their partnership doesn’t work like that. Besides, it “evolved as we went along,” says Gladstone, who plays violin and has, according to Hille, “a music brain.” Both wrote the book, lyrics, and music: “We’re not entirely sure now who wrote what,” says Gladstone.

The music of Onegin is played by an onstage three-piece band (keyboards, percussion, cello) that’s often included Hille herself ( though not for the Edmonton run ). Both Hille and Gladstone hesitate a little over the identification “rock.”  Or at least “not heavy rock, since there’s very little electric guitar,” as Gladstone qualifies. “Personally, we’d always love to have it louder. One day….” (sigh, laughter).

The score, downloadable from Hille’s own website (vedahille.com) has allusions to Russian folk music, she says. There are Tchaikovsky quotes, hints of Tom Jones, Kanye West, Kendrick Lamar….” Gladstone says that some of it might remind you of Hadestown, the Anaïs Mitchell folk opera that played the Citadel this past fall.

And it’s sung through (without spoken dialogue). “So I learned how to write recitative,” says Hille, for whom challenges seem to be meat and drink. Her music for Jillian Keilley’s 2017 Stratford production of The Bakkhai was widely acclaimed (she didn’t get a chance to see the show). There’s nothing tentative about King Arthur’s Night, an epic Neworld Theatre production with a 20-piece choir, live band, and racially inclusive case; it premieres at Vancouver’s PuSh Festival next month. Then there’s the artist residency in Scotland….

Meanwhile, after a hot-ticket run at One Yellow Rabbit’s High Performance Rodeo in Calgary, Hille’s musical-writing partner is in Edmonton with the most of the original seven-member cast of Onegin — including star couple Alessandro Juliani and Meg Roe. The run here launches Catalyst Presents,  the company’s initiative to bring the most exciting and innovative work to audiences here, alternating with Catalyst’s own original work.

Gladstone, who’s walking toward the Citadel from his hotel as he talks, is relieved, he laughs, that “the set has survived a Canadian winter!” A small miracle in itself.

“Whether we’re in a big space like the National Arts Centre, Theatre Calgary, or the Maclab, or smaller ones, it feels like we’re hosting a great party for everyone every night! We’re trying to connect with as many people as we can.”