Across the universe: salvaging the sounds of the past in The Listening Room

Thoughts meander like a restless wind inside a letter box;

they tumble blindly as they make their way across the universe

It’s the turn of the next century. And in the post-apocalyptic desert of the world, a small brigade of teen dissidents are holed up in a room filled with junked radio telescopes and sound equipment. They’re listening to the fragments of a past that has ceased to exist, and is gradually disappearing from memory.

The Listening Room premieres Friday in a production by the well-named Cardiac Theatre, an indie collective that thrives on tough-minded challenging fare. And a particular challenge is what brought the new play into being, explains its creator, Calgary-based playwright Michaela Jefferey, an up-and-comer whose work is attracting notice across the country.

At the National Theatre School, where Jefferey repaired after University of Calgary theatre school, this was the bait: “to take on a genre I would never otherwise think of digging into.” Her choice? “Sci-fi and apocalyptic fiction.”

“I became fascinated with everything we humans have sent out into space,” Jeffery says on the phone from her day job at the Arts Common, the downtown Calgary complex where Theatre Calgary, Alberta Theatre Projects, and One Yellow Rabbit have their headquarters. “Not with space (per se), but with time capsules and the way they distribute information about human life, and who curates and compresses that information.”

Jefferey launches a train of thought from the Beatles’ Across the Universe. “What interested me was the human impulse to communicate, whether entire diagrams of DNA or images of human hands … or an archive of sounds. The ‘I Was Here’ impulse’,” as she puts it. 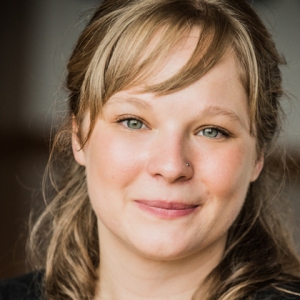 “There’s something lovely about it, this desire to live beyond our lives,” says Jefferey. It was this thought that led to Jefferey’s presiding concept for The Listening Room: The Earie is a future society, and embedded in it is a splinter group of renegade teens, combing through apocalyptic detritus for clues about and a sense of connection with, the past.

The Listeners scavenge for fragmentary signals, and record them for interpretation by the Council, the authority with whom the Listeners have “a complicated relationship,” as Jefferey summarizes.

As the script developed, time and place (Montreal, the National Theatre School) had their effect on the script, says Jefferey. She met a coterie of radicals whose “revolutionary” zeal didn’t extend beyond protesting. “I found it absurd. And angering,” she says. “I met young Quebec guys off to a protest. ‘What are you protesting?’ I asked. ‘Dunno, we’l find out when we get there’…. The idea is that protesting is a muscle. Use it or it will atrophy.” Jefferey pauses to readjust her thoughts. “The power of blinkered certainty,” she says, “doesn’t make me less sympathetic to the drive for change….”

The adolescents of The Listening Room are “right in the middle of the grinding gears of a disintegrating worlds,” says Jefferey. “That’s the way young people experience things … so raw and exposed, vulnerable and intense. The image I have is exposed wires,” Jefferey says. “But how do you reclaim your advocacy? How do you figures out how to go forward?” Radical differences in how to be radical explode in the course of the play.

“And in a small room, when all of the people are super-weirdos on the fringe of the fringe of society, how do you navigate the relationships? ?”

The Listening Room, which Jefferey considers “a radical departure from anything I’ve done,” is about all of this. “Despite all the trappings, and the sci-fi universe, it’s a real-time (75-minute) drama about five young people trying to figure out their place in the world,” says Jefferey. “About what kind of power they have, and what kind of power they want … in a world barrelling in a direction they don’t agree with.”

“It’s easy to feel angry and betrayed. It’s a lot harder to figure out what needs to be done. I guess that’s what it means to grow up….”

The Listening Room is a rare example of an indie production ambitious enough to reach across the  Albertan universe, between its urban axes. The Cardiac production directed by Harley Morison launches the new The Alberta Emerging Company Showcase, a joint bi-city initiative by Edmonton’s Azimuth and Calgary’s Downstage Theatres. The playwright is from Calgary, the director from Edmonton, the cast and production team from both cities. After the premiere run here, The Listening Room moves to Calgary.

Last word to Jefferey. “Interacting with Cardiac, I’ve felt such a refreshing energy! It’s exciting to be in a room so professional and focussed and positive…. This is the way I want to ride.”