The complex lives of fathers and sons: Empire of the Son comes to the Citadel Club

Tetsuro Shigematsu in Empire of the Son. Photo by Raymond Shum.

In the hit touring show that arrives Thursday in the Citadel Club, a son tells the story of a remote, unapproachable father: his own.  Countries get adopted, and left behind; continents get crossed — and so, too, do vast distances in a father-son relationship extenuated by congenital reserve, cultural tradition, the immigrant experience.

The son we meet in Empire of the Son is Tetsuro Shigematsu, actor, writer, and former CBC broadcaster. His late father Akira Shigematsu was a broadcaster, too, whose fascinating narrative took him from his native Japan first to England and then to Canada.

If Shigematsu the Younger had been, as he puts it, “OK with the status quo, i.e. to never have a conversation with my father beyond ‘pass the soy sauce’,” Empire of the Son would never have happened.

He’s on the phone from Vancouver, a charming and hyper-articulate conversationalist, to explain. “But I realized now that have two kids of my own, if they’re anything like me they’d soon be asking questions about cultural identity. Who am I? Where did I come from? Inevitably, I knew, they’d start asking questions about Grandpa.” His father’s health was failing. “It was now or never….”

Two years into researching and interviewing his father for a show that’s also his PhD thesis at UBC, there came a moment of truth when Shigematsu had to formally ask his father’s permission to share his story. “‘Have you ever wondered why I’ve been asking all these questions’,” the son put to the father. The flat answer: “no.”

“He looked so perplexed, as if I was suggesting is it OK if I take your toenail clippings and auction them off on eBay?….”

Twenty years before, in his mid-20s, Shigematsu had written an Empire of the Son prequel of sorts, Rising Son. “That was me, trying to understand the acrimonious nature of my relationship with my father … when he was at the height of his powers and more fearsome than ever,” he says genially. Just as the the show started to get some traction, Shigematsu’s mother took him aside. “Dad says you make fun of his accent for a living.” she said. Was Dad being sardonic? His mother didn’t know, which, translated from the classical Japanese, meant “stop.” So he did.

That show, says Shigematsu, had proven an entry card into Canadian broadcasting, though. He started writing for This Hour Has 22 Minutes. Opportunities multiplied. When he replaced Bill Richardson on The Roundup, he became the first person of colour to host a daily national radio show.

Two decades later, the paternal No had turned to an unhesitating Yes. Why? “Because at the end of my life, if you tell my story, then it will have had some meaning,” Shigematsu heard. “I was so struck by that…. I still felt like a kid, in a state of protracted adolescence in my ’mid-‘40s when, by all measures I should have been a man. I was still looking to my father to not die until he could give me some glimpse of meaning that would make it all hang together. It never occurred to me that in doing this show I’d switched positions…. It was a big surprise to me.” 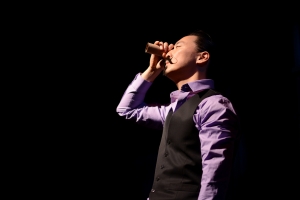 Tetsuro Shigematsu in Empire of the Son. Photo by Raymond Shum.

The month before his multi-media solo show premiered in 2015 at the Cultch in Vancouver, Shigematsu’s father passed away. “So that created a kind of meta-story, a story behind the story: people found it quite moving that I was performing the show at all,” Shigematsu reports. “It moves a piece of theatre into the realm of performance art, I guess, which could be uncomfortably real. But because the show is funny, people find it a largely enjoyable experience.”

There was a moment during the 2015 premiere run at the Cultch in Vancouver that demonstrated to Shigematsu the blurred frontier between art and life along which his show plays. “My son is the butt of some of my jokes in the show,” he says, “the kind of intimate details that really embarrass kids, like cleaning him up after he went to the bathroom.” Or pointing out that an inability to shed tears — one of the emotional motifs of a show that taps the no-cry zone of reserve between father and son — wasn’t an inhibition shared by his own kid.

“He was eight years old at the time. And I really prepped him, probably over-prepared him, before the show. ‘I’m going to say this line and the audience is going to laugh, not at you but with you’…. When the time came, I noticed his seat in the third row was empty. I could see his hand reaching up: he was under the seat.”

Shigematsu laughs. “I stopped the show and said to the audience ‘excuse me ladies and gentlemen; I just have to take a moment with my son…. He’d started yelling ‘He’s lying! I don’t do that any more!”

“I explained ‘you’re the hero of this show! You’re the first Shigematsu to break this chain of emotional frigidity’” The kid’s spontaneous rejoinder was so perfectly timed the audience probably assumed it was scripted: “Yeah, if I’m the hero of the show, then how come I’m not on the poster?”

“I thought I was a writing a culturally specific story,” muses Shigematsu, thinking of his Japanese-Canadian immigrant family, knit together by habits of reserve and the tear-less constraints of masculinity. “But after interacting with audiences I realized that many people, Germans, British, Italian extraction, had similar stories about their own fathers.”

The anglophile thread in his father’s story makes a certain cultural sense, as Shigematsu explains. A copy of Somerset Maugham novel donated by a travelling book salesman “sparked a love affair with English literature.” So, from post-war Japan to England: “both are island nations with long naval histories and imperial pasts; both prize emotional reserve.”

“We all have our fantasy cities,” says Shigematsu. “If we ever get to Paris or New York we’ll be complete.” For his father it was London. And in his dream city he landed his dream gig, with the BBC Foreign Service.

But when Shigematsu and his twin sister were born, “he decided that England in the early 70s wasn’t a place to raise kids.” The family emigrated to Canada when Shigematsu was two. “My father thought of Surrey, British Columbia as a cultural wasteland; he felt very much in exile, not from Japan but from England.” His father’s broadcaster’s career in Montreal (he hosted a radio show) was a victim of CBC cuts; he ended up working in the mailroom.

For Shigematsu himself, telling the story of his father was both his calling card in broadcasting and then, as the live experience with audiences drew him back, his exit visa. His latest show One Hour Photo, a companion piece of sorts to Empire at the Son that involved interviewing elderly Japanese men about the internment, premiered at the Cultch last fall.“My siblings were mystified when I walked away from CBC,” he says cheerfully. “A high-paying job, security, a measure of profile, low-level Canadian fame … these are for many, the recipe for happiness.”

Shigematsu takes the occasional gig in “other people’s shows,” time permitting. But identifies primarily as a writer not an actor, he says.

“As a person of colour who belongs to a marginalized community who don’t often see ourselves represented on stage or screen, I can address that as a writer…. It’s the realization that rather than complain about the dearth of Canadian-Asian representation, I have to go ahead and do something about it.”

Empire of the Son

Created by and starring: Tetsuro Shigematsu