The Ladies Foursome: the short game goes long. A review 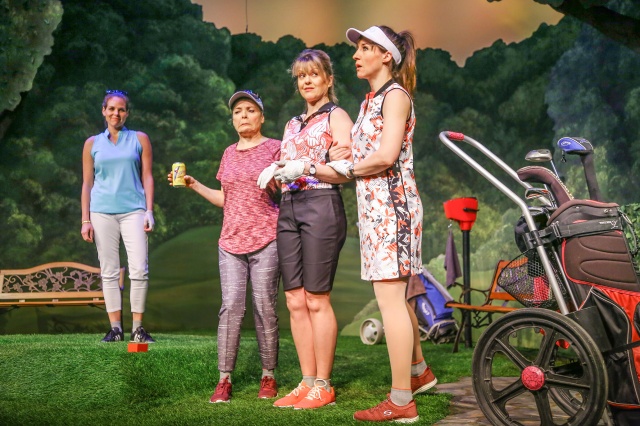 Hitting a tiny ball with a skinny stick? A long long way into the distance into a hole you can’t even see?

To the non-golfer especially, the whole point of that particularly maddening game — alluded to by many — is that an 18-hole excursion into nature gives you the excuse to hang out with your friends for roughly the length of an average full-length comedy by Norm Foster.

This country’s most-produced playwright by far (with regular incursions into summer theatres across the border), Foster uses golf to frame the 2014 comedy that’s currently onstage at the Mayfield Dinner Theatre. And Jim Guedo’s production of The Ladies Foursome is your excuse to hang out with a quartet of accomplished comic actors. In the course of the evening you’ll see them exercise their considerable chops on Foster’s flat, well-mowed 18-hole course of subjects from the female stance. Among them are life, love, marriage, sex (satisfactions vs. dis-), kids (ideal vs. real) and child-rearing, thwarted dreams and ambitions, shared memories, belief in God (is there one?), the afterlife (is there one?), the cosmos (fate vs. randomness), getting anti-aging “work” done (pros vs. cons), regrets, friendship….

A female companion piece to Foster’s all-male Foursome, The Ladies Foursome gives us four women out on the course in honour of their fallen golf companion. Catherine, incidentally, has just died in a tragic and cautionary lightning strike at the top of a ferris wheel.

Three are old friends, who golfed with the dearly departed every week for 14 years. Oddly, they seem never to addressed any of the subjects listed above till now. The fourth is a mysterious stranger who knew Catherine, too: for two weeks a year the now-deceased visited the remote lakeside hotel that Dory (Amber Lewis) and her husband run.

They are a cross-section, by a playwright whose best work transcends the predictability of the kind of check-list construction that’s in evidence here. Connie (Stephanie Wolfe), the breeziest of the four characters and equipped with the funniest of Foster’s one-liners, is a TV news anchor who’s addicted to men, and sex of the casual persuasion. Tate (Belinda Cornish), alternately chirpy and mopey, is the apparently naive stay-at-home wife of a vascular surgeon, with teenage kids: “mine is a life misspent.” Margot (Karen Wood), who unapologetically cracks a beer despite the early hour (“time, what is time?”), owns a construction company and has a new beau. The actors are all top-notch.

The presence of an outsider gives the comedy its obvious excuse to do the introductions. Dory is a bit like the TV therapist or the TV detective Colombo who asks questions and always avoids answering them. This is the trickiest assignment; the character is most self-evidently a plot device, who plants doubts and reveals semi-secrets. Despite the obvious signs of calculation in the character as written, Lewis, a skilful actor, delivers a performance that negotiates, with some finesse, the, er, sand traps and water hazards.

Revelations ensue (“you feel inadequate, is that it?”). Secrets get aired, incrementally, and up the ante in ways that may well strike you as shameless and/or sentimental. Old jokes get an under-par afterlife. And an A-team production from an A-team director gives a four-square but distinctly B-team Foster comedy a deluxe treatment. Doug Paraschuk’s amusing design, a collection of woodsy painted cut-outs, deserves its own shout-out.

My favourite scene is the last hole, a genuinely funny piece of stagecraft from Guedo and co, with Shakespearean resonances. And that’s not just because it’s the last, in a comedy that might well have stuck to nine holes and repaired to the club house.