Taking a taxi through ’80s Madrid: Women On The Verge Of A Nervous Breakdown, the musical

Jocelyn Ahlf and Andrea House in Women On The Verge Of A Nervous Breakdown, Plain Jane Theatre. Photo by Marc J Chalifoux.

Tip the driver. As Kate Ryan says, that’s exactly the careening route of Women On The Verge Of A Nervous Breakdown, the 2010 David Yazbek/ Jeffrey Lane musical with the blue-chip pedigree. It’s based on the celebrated 1988 film by the Spanish master Pedro Almodóvar, who based it on the 1928 play La Voix Humane (The Human Voice) by Jean Cocteau. And it took The Plain Janes, the theatre company Ryan leads, a couple of seasons, against the wind, to get it to Thursday’s opening night.

“It’s ‘80s splatter art!” grins Ryan, reflecting on the colourized look and feel of her eight-actor (five actress!) production. “Women breaking out, breaking down, breaking up — all at the same time … In colour!”

At the centre of this high-speed turmoil through ‘80s Madrid is Pepa (Jocelyn Ahlf), a TV actor who wakes up to the news, via phone message, that her lover has dumped her and vanished. A pursuit follows, in which women with connections to the missing Ivan guy accumulate farcically around Pepa: his deranged ex-wife, a woman who’s discovered that her lover is a terrorist, Ivan’s son’s frustrated fiancée — plus  assorted cops and the philosophical taxi driver.

As you’ll know from their history — Drat! The Cat!, Little Fish, Ankles Aweigh, It’s A Bird It’s A Plane It’s Superman — the Janes shine their light on the kind of off-centre, quirky, obscure, or neglected musicals tucked into the corners of the repertoire. As Ryan explains, Women on the Verge comes from the archive of bright musicals that got over-inflated on  Broadway, and flopped — this despite the starry New York talent it attracted, including director Bartlett Sher, Patti LuPone, Sheri Rene Scott, Laura Benanti, Brian Stokes Mitchell, Danny Burstein, Salma Hayek.

“It was overdone,” thinks Ryan, who’s studied arrival footage from that Broadway premiere. “So many bells and whistles: the world was too big….” The London production of 2015 was much more successful, a smarter, scaled-down version that “focussed more on the people, less on the world.” Director Sher famously joked that the Broadway production was the most expensive out-of-town tryout in history.

Yazbek and Lane are the team behind such stellar movies-turned-musicals as The Full Monty and Dirty Rotten Scoundrels, and the lovely current New York hit The Band’s Visit. And Women On the Verge reveals something of that expertise with particular styles, thinks Ryan. “Yazbek’s music really invests in the style of the movie … rock, tango, bossa nova…. And with Lane’s verbal art, the combo so captures the Spanish spirit…. So smart, so naughty.” And this time, the Janes have sprung for a live band, with Erik Mortimer, Van Wilmott, Paul Lamoureux, and Steve Hoy.

Almodóvar, says Ryan, “is not afraid of the beauty, the joy, and the ugliness….” And Yazbek/Lane are exactly the team to capture that human quality, she thinks. After all, it’s “a romance where no one falls in love. You turn a corner and you don’t know what’s coming.” 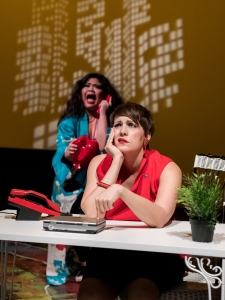 Michelle Diaz and Jocelyn Ahlf in Women On The Verge Of A Nervous Breakdown, Plain Jane Theatre. Photo by Marc J. Chalifoux.

The filmmaker’s career took off in the late ‘70s, in the cultural/ sexual renaissance of post-Franco Spain. It was a veritable revolution. Says Ryan, “Almodóvar is in love with women, every single colour a woman has: rage, jealousy, the joy, the passion…. These women are fighters! They have resilience!” They scream, they cry, they hit walls, they spike the gazpacho (really, the only scene in a modern musical with blender accompaniment).

Ah, and they sing. It’s a musical, thinks Ryan, that “doesn’t have to justify what happens. People appear. Anything is possible…. The world from the beginning is in a state of madness. And that suits theatre musicals quite well. A song is the perfect place for that kind of heightened emotion.”

Women On The Verge Of A Nervous Breakdown

Written by: David Yazbek and Jeffrey Lane, based on the Pedro Almodóvar movie