The Silver Arrow: all-inclusive theatre at the Citadel, a review

“There’s a story that’s waiting for you,” sing the ensemble in one of Hawksley Workman’s most lyrical songs in The Silver Arrow: The Untold Story Of Robin Hood. “The adventure will find you when you’re ready for it….”

The adventure that has “found” the Citadel, in this new family extravaganza by Edmonton’s Mieko Ouchi, includes stage combat of every type, aerial acrobatics, archery — all impressive. It has a big cast (16 strong, and I use “strong” advisedly), a singing narrator, a differently abled hero to root for, and juicy villainy to boo. There are musical numbers, and non-stop physical action that doesn’t give gender the time of day. Not to mention multi-ethnic characters, and culturally diverse performers (and weaponry), and an ingenious back premise with multiple contemporary resonances. Ah, and romance.

The Silver Arrow doesn’t skimp in any way; it’s not just inclusive but it’s an all-inclusive, as they’ll say in another era. What doesn’t The Silver Arrow have? Judging by this spirited, but exhaustingly busy, big-budget premiere production directed by Daryl Cloran, it doesn’t have a sense of when to say when.

It will doubtless be refined and edited in further developments; this is the debut look at a family-targeted enterprise with a future (as ticket sales confirm). As it stands now, though, The Silver Arrow comes at you in a relentless two-and-a-half hour-plus barrage of staccato scenes and characters that don’t really develop as much as they scatter across the Maclab stage, waving their swords and condensed back stories. Many of them are worthy of development, but there’s such a thing as clutter to consider, too. 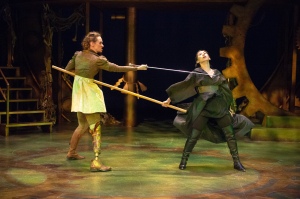 Drew Facey’s striking design, steam-punk in style, locates the characters inside what looks like Victorian clockwork machinery, with giant gears. We meet Bina Fitzooth (Kristi Hansen) as a sort of pre-Raphaelite maiden in a tower. She’s a Lady of Shalott figure who’s an outsider, reduced to observer status in the world by the fact she has only one leg. And she’s chafing at the bit to join in. “There has to be more to life than reading and sewing,” she laments.

It turns out there is. There’s flying through the air upside down, for example. Or taking sword and bow in hand expertly, and kicking butt. Hansen, who’s an awesomely gifted physical actor, does all of this — and even more when Mac (Scott Farley), a particularly creative blacksmith/inventor, builds her a mechanical leg. Farley turns in a delightful performance as a lovestruck steam-punk nerd.

Life is problematic, and a big opportunity for anyone with a sense of injustice, as The Silver Arrow reminds us a bit too insistently. Bina’s brother Robert (Giovanni Spina) “has met a girl.” Unfortunately Maid Marian (Katelyn McCulloch) is Norman. And she stands in danger of getting married off to the badass enforcer, and chief fund-raiser, the Sheriff of Nottingham (Jesse Gervais, in a deliciously gloat-y villain performance) by corrupt King John (Victor Dolhai).

Taxing the poor to pay for the excesses of the rich is a morally dubious enterprise. Building a palace in an old-growth forest:  also dodgy. Food is scarce amongst the impoverished villagers; they poach to survive (that’s the meal plan in the all-inclusive I mentioned earlier). It’s all there in The Silver Arrow: Taking from the rich to give to the poor is Robin Hood Feeling the Bern.

When Robert is declared an outlaw by the repressive regime, he and Bina and friends head for Sherwood Forest (à la the good Duke and entourage in As You Like It). The complications of the plot, worked out in some detail in The Silver Arrow, provide a backdrop to a legend in something of the same way Peter and the Starcatcher is an origin story for Peter Pan.

Meanwhile, to the continuing narrative excuses for outbreaks of stage combat are added the scenes where the characters practise fighting in order to prepare for the real stage fighting. Lordie,  this isn’t an HBO 13-part series. There’s even a soulful Japanese fight master (Louise Zhu), who has apparently walked  from Japan in order to impart her wisdom (and her Japanese bladed fans) to the resistance movement in Sherwood Forest. “If people think little of you they will lose.”

The fight choreography by Jonathan Hawley Purvis looks persuasively dangerous, and is strikingly executed. The inventive aerial choreography fashioned by Firefly Theatre’s Annie Dugan includes romantic encounters on trapezes and escapes and physical “soliloquies” (McCulloch has one), with scenes of madcap near-misses, played for upstaging comedy (Stephanie Wolfe and Kevin Ouellet as members of the royal police). Aerial sequences are even built into the fight scenes from time to time, in ingenious ways. Let no one argue that Cloran’s production doesn’t fully occupy the Maclab.

Ouchi’s often witty script has fun with anachronisms (“I’ll tweet if I need help”), but has a tendency (at least to my taste) to explain its moral positions a little too overtly, too often, and unnecessarily. “Maybe different is not bad it’s just different….” Or “we all feel the need to belong.” Or this from the youthful Scarlet (Patricia Cerra): “I know I’m young but this is my community too.”

The narrative premise the playwright has worked out, and the theatricality with which it’s set forth by the actors (mostly participants in this year’s Citadel/Banff Professional Program) and by Workman’s appealing assortment of songs, are eminently capable of taking care of the message: collaboration is the key to fighting social injustice. Collective action is what makes heroes.

It also makes theatre, of course. “We’ve all had enough,” says Robert, the social action sage, at one point. Well yes, in this he’s right, at least at the moment. The Silver Arrow certainly takes its billing as an action adventure to heart. And it will find a more graceful way to to take its manifold theatrical riches forward, and share. Ample is always a better way to start than meagre.

The Silver Arrow: The Untold Story Of Robin Hood

Written by: Mieko Ouchi with music by Hawksley Workman

Starring: Kristi Hansen and 15 others