The art of spontaneity enters a disturbing new dimension: The Society of Strange comes to Improvaganza 2018 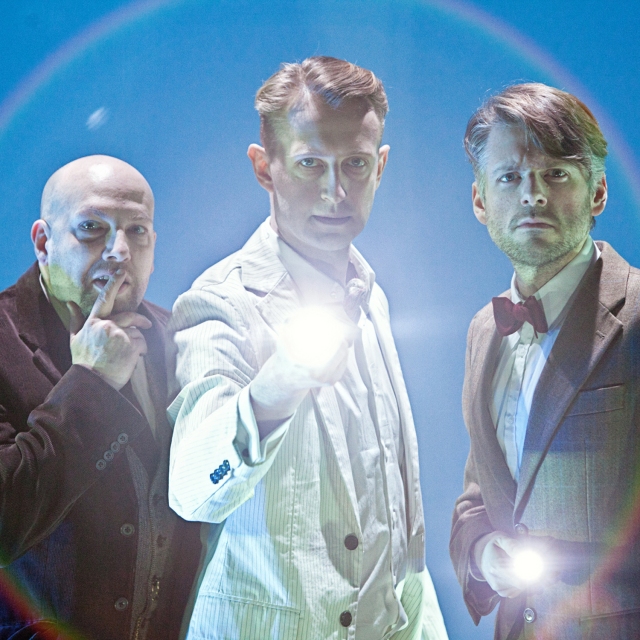 Improvaganza, the 10-day festival with bona fide global connections, expressly devoted to the adrenalized art of the spontaneous, is all of that. With The Society of Strange, arriving from across the pond for the 20-act 18th annual edition of Rapid Fire Theatre’s festivities go a step further into unpredictability.

“It’s an experiment,” says the English improv star Adam Meggido on the phone from London. “An investigation into whether we can make improv spooky.”

“Even with the big resurgence of popularity in improv all over the world, people still think of improv, generally, as comedy. And a lot of it is. Which is great.” The Society of Strange is an exploration of “the weird, the out-there,” as the genial Meggido puts it. “Can we disturb whilst improvising?”

The challenge of the improbable isn’t something new to Meggido and his English cohorts. After all, they launched such improbable improv initiatives as the full-length “utterly bespoke” Showstopper! The Improvised Musical. Ten years (and a thousand performances) old, it was the first  — and remains the only — improv show in the world to be nominated for, and win, a major theatre award (an Olivier, the English Tony) for its West End production — on a night when the audience suggestions included the Bee Gees, The Sound of Music, and Hamilton.

Edmonton audiences have a chance to see Showstopper! in action, in a six-actor-plus-live musician edition. The show, which tours and has regular dates at the Lyric Theatre in the heart of London’s theatreland, has an Improvaganza berth June 22, en route to its annual return to one of the largest venues at the Edinburgh Festival, the Pleasance Grand.

Meggido, along with Sean McCann, both familiar to Edmonton audiences from Die-Nasty’s Soap-A-Thon appearances and Freewill Shakespeare Festival fund-raisers, continues to tour an eerily virtuostic show called Rhapsodes. The pair acquire real-life stories from the audience. And then, based on them, these masters of difficult poetic metres custom-make the play that William Shakespeare somehow didn’t get around to writing, whether comedy, tragedy, history, or romance.

Meanwhile, with The Society of Strange, there’s a venture beyond improv comedy into improv in other disturbing dimensions.

“Sometimes it’s very funny,” says Meggido of The Society of Strange. “Sometimes it just switches and becomes really strange and sinister. And we never quite know where that line is…. It’s a question of listening to the audience, and trying to decide which way to go, depending on how they’re reacting.”

As he explains, the inspiration for The Society of Strange — in which the intrepid Meggido and three cast-mates spin two or three tales of the strange and sinister on the spot from audience suggestions — is the “Weird Tales movement, which came to the fore in the 1920s and ’30s with writers like H.P. Lovecraft and Algernon Blackwood….”

Along with Mary Shelley, Stephen King, the purveyors of Black Mirror, you could call them horror-meisters. But, like the tales of their great progenitor and godfather Edgar Allan Poe, their work is more nuanced than that. “They’re somewhere between horror, fantasy, and sci-fi,” says Meggido. “Strange tales that are unsettling, and not explained. Not neatly tied up. Something like David Lynch.” 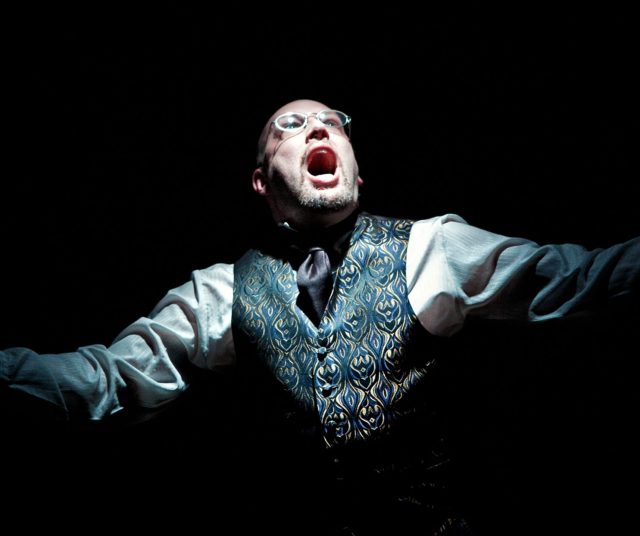 Meggido himself is particularly drawn, he says, to the tales of the Blackwood, many of them set in Canada as it happens. “The most terrifying story I known is The Wendigo … the only book I’ve had to put down because it scared me so much. Extraordinary. ” And he’s a fan, too, of the world of the American Thomas Ligotti.

For the Improvaganza showcase June 21, The Society of Strange is joined by Edmonton improv virtuoso Mark Meer, whose knowledge of the “world of weird,” and in particular the H.P. Lovecraft canon, is, as Meggido says, vast and deep. “What lies at the core of them is inexplicable, the world of the other. You’re gripped. But to try to understand, to really comprehend, is to go mad!”

Since lighting and sound are huge contributors to the genre as it lives onstage, The Society of Strange travels with design improviser Chris Ash. “We take a suggestion (from the audience) before each story, and sometimes we might even ask the audience to share something odd, something that’s happened to them, as a lever.”

Creating fright isn’t easy in the live theatre. Meggido, who reports that The Society of Strange is experimenting with one-a-month podcasts recorded live in front of an audience, thinks it’s because “unnerving people requires such a suspension of disbelief..…” In order to buy in, “you have to really immerse yourself in what’s going on.”

“It’s the most challenging form you can put onstage, I think…. And that’s why we’re doing it!”

The Society of Strange showcase is June 21 (10 p.m.); Showstopper! The Improvised Musical runs June 22 (8 p.m.). For the full schedule and description of Improvaganza shows, check out http://rapidfiretheatre.com.