30 summers of Shakespeare in the great outdoors

‘Tis wondrous strange, but there was a time, now receding into the mists of the past, when Shakespeare (Will to his friends) didn’t camp out in the river valley every summer. When you couldn’t drift down to Hawrelak Park on one of those lingering Edmonton dusks, and have a magical, heart-stirring, funny, eye-watering communion with a great play by the man from Stratford. Ah, and share the experience with gulls and ravens, squirrels and the guy with the megaphone who rents the paddle-boats.

Thirty summers ago, the Freewill Shakespeare Festival wasn’t a beloved cultural tradition, or a leading professional rep company with a bold, vivid, anti-élitist.contemporary house style. That was all to come. No, in 1989 it was six friends, sparky young U of A actor grads “facing the gaping maw of uncertainty,” as James MacDonald puts it, remembering their enterprising 22-year-old selves.

He and his theatre class-mates, who’d played so well together in school, were hungry for the chance to showcase their talents. And they’d spotted a come-hither niche in the civic landscape: ‘cmon, what kind of real city doesn’t have summer Shakespeare?

MacDonald, these days the artistic director of Western Canada Theatre in Kamloops, remembers the time with a combination of affection, amusement, and awe.“We looked at verdant green spaces, (imagining) picnics on hillsides. We looked at the Legislature ground, Borden Park, Emily Murphy….” Tent rental clocked in at 150 grand; “we didn’t have 500 bucks between us!”

So it came to pass that the Free Will Players and their resilient resident playwright repaired to Heritage Amphitheatre in Hawrelak Park. “We never imagined we’d stay there,” MacDonald laughs. “And then we started to find ways to actually enjoy it…. It was always about doing great plays for an interesting, unique space. And we turned it from a liability into a really exciting asset!”

The debut show? A rockin’ punk-ish party people version of Shakespeare’s early farce The Comedy of Errors — the very play that opens the 30th anniversary season Thursday (directed by Dave Horak), with Marianne Copithorne’s production of Hamlet to follow Friday. 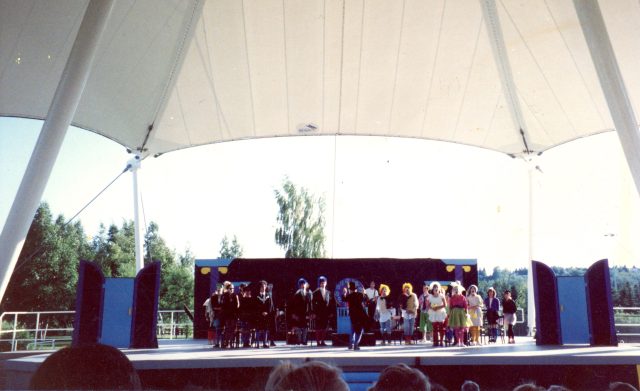 MacDonald and Annette Loiselle (now the artistic director of Skirts Afire) flew in a Toronto director, Susan Cox, “to give us professional cred. And she cracked the whip.” And so did the weather: the temperature dropped; the wind howled; the rain turned to sleet. And in the summer of ’89 there were no mics, “so we all screamed all our lines,” says MacDonald, the company’s first artistic director, of the only time in a 60-plus production acting career when he’s lost his voice. All his cast-mates did, too. “Nobody could understand of word of what was going on! Good thing we had the bizarre costumes, the fright wigs, the make-up!”

A test of fortitude, yes. “But what we learned,” MacDonald says, was that “the experience had a lot to do with the milieu,” in all its glorious panoply of distractions —  ducks, kids, cars, squirrels, paddleboats, the roar of the nightly PWA flights to Calgary overhead.

“I always like to think that Shakespeare was competing in the same way — with hazelnut sellers, rowboats on the Thames, pickpockets…. Theatre is not a precious experience; that’s the last thing I’d ever want it to be. It’s got to be fun!”

Of necessity there was a kind of improv “guerrilla theatre” ingenuity about the whole production side, as MacDonald explains.“Someone had a connection to a lumberyard,” ergo the set that year was  distressed wood. For their second show, Twelfth Night in 1990, the troupe acquired 1200 used tires from a junkyard — in which mosquitoes were hatching by the zillions. “The audience was an absolute banquet for them; we’d go backstage and have the blood drained out of us,” MacDonald laughs.

“One year we painted the set in certain colours because they were the colours of the free paint we got…. Monkey bars, scaffolding, anything we could get our hands on, so the actors could get paid.”

That first year the actors went home at the end of the summer with a princely $150, six years later it was $1500. “We celebrated the small victories….” When the Citadel founding father, the late Joe Shoctor, sent Freewill $25 they were thrilled. “He recognized that we existed!”

“We started out at zero every year,” says MacDonald. “Because every year we spent all the money!”

One of the keynotes of Free Will has always been the powerful cohesiveness of an acting ensemble, where veterans and emerging artists develop together. Under those circumstances, actors turn directors. And, strikingly, every Freewill artistic director has been, first, in the acting ensemble.

MacDonald’s directing debut was a riotous Taming of the Shrew in 1996. Before he became artistic director in 2003, John Kirkpatrick had been in Freewill casts for five years, starting in 1998 when artistic director Geoffrey Brumlik cast him and John Ullyatt as the Antipholus twins in The Comedy of Errors, which alternated with MacDonald’s Julius Caesar. That year was the leap of faith and confidence threshold when a pass-the-hat co-op became a professional rep operation: two alternating Shakespeares, a comedy and a tragedy or history.

Copithorne, Freewill’s current artistic director, made her Freewill acting debut as Lady Macbeth in MacDonald’s 1999 production. Famously, it had the worst weather in company history, night after night. The witches chanted; blue lightning zig-zagged down the tent pole. Copthorne says candidly, “I didn’t come to Shakespeare till my mid-30s… I just did not get it! It took me a while….” It was a dramatic conversion. She launched her artistic directorship in 2009 with a gutsy choice, the notoriously gory Titus Andronicus. She’s directed the ever-provocative The Merchant of Venice, starring John Wright (Sterling nominated for his performance as Shylock), twice.

John Wright and Belinda Cornish in The Merchant of Venice, 2017. Photo by Ryan Parker.

Freewill is an actor-centric company. And you know it if you’ve looked Hamlet or Macbeth in the eye, in natural light, and they’ve enlisted you directly in the big questions of their lives. Soliloquies aren’t speeches in those circumstances; they’re more like dialogues.

“We’re all in the same place, looking at  each other, not hiding in the dark.” says Kirkpatrick, who’s been in the Stratford Festival company for the past six seasons. As Hamlet he remembers starting “to be or not to be”: I’d be coming down the aisle toward the stage, looking people in the eye to help me figure this out….”

MacDonald, who’s played Macbeth, agrees. “There’s no barrier between the stage and the audience. You can see them; there’s no lights going down…. I used to get nervous, tearful, and then thought ‘No! I have no right to be quaking in the back!’: you have to stand there and engage with people, talk to them’….”

There is something very Shakespearean about the whole experience, Kirkpatrick and MacDonald agree. “Because I  learned to direct in a space with no lighting,” says the latter, “what I relied on were the actors.” And Freewill attracts the best, again and again.

Mother Nature, the festival’s always-acknowledged “ambience director,” is more capricious than any actor, but capable of delivering magical and dramatic moments no one could have rehearsed. MacDonald remembers the unpaid contribution to Macbeth of a squirrel who crossed the stage covered in blood just as Duncan was getting murdered: he’d gotten into the stage blood. Or the rumbling thunderclap that accompanied “his name is Romeo, and a Montague.”

There’s invariably a brash gull chorus, who cackle fortissimo at the moment when, say, Richard III is explaining his secret path to the crown. A storm during The Tempest, thunder while the conspirators plot to kill Caesar, a misty sunset towards the end of The Winter’s Tale, “gathering night” for Macbeth … nature has a crazy, impulsive relationship with outdoor Shakespeare. 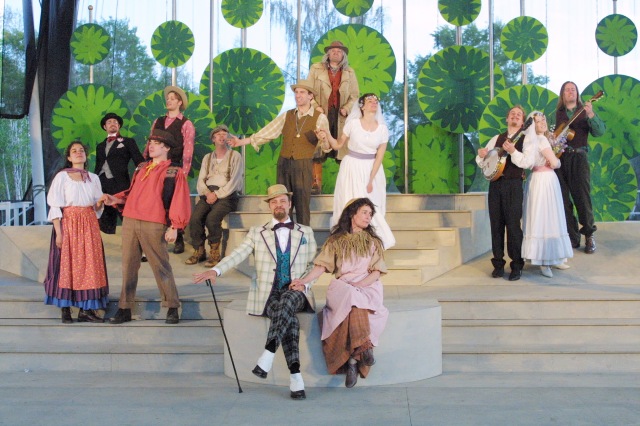 John Kirkpatrick and Marianne Copithorne in As You Like It, 2001. Photo supplied.

As with all living traditions, there’s an inter-generational continuity about Shakespeare in the park, for both actors and audiences. Kids have been at the shows since they were babies — and they’ve become theatre-goers and artists. At 14 Ben Stevens played Banquo’s young son Fléance in the 1999 Macbeth in which Copthorne was Lady M. This summer he’s a member of the acting ensemble, and his new play But Hark, A Voice! premieres during the festivities in a Thou Art Here production. “Ben’s dad was on our board,” says MacDonald of the early days. “And he was born four months before the first festival!”

Thirty summer and every size and shape of Shakespeare role later, Troy O’Donnell, a Freewill founding father, is still in the company.

As for the audience, “people are coming for the play, and also for the experience,” says Kirkpatrick. “Families, kids, I’m always amazed by how eclectic the audience is…. It’s always been a magical time to me, standing at the top of the hill, watching the thousand seats fill up.”

“It reflected the city at the time. And it still does,” says MacDonald of the birth of Freewill. “We were inspired by Fringe, by Dick Finkel at the Street Fest, by the Works … the energy of all that. Edmonton’s the best place in the world in the summertime.”

On the eve of the 30th anniversary season, which runs Thursday through July 15 in Hawrelak Park, three artistic directors look back on favourite Freewill productions.

John Kirkpatrick: Chris Bullough as Richard III, a highly original “vaudevillian” take based on The Entertainer: “you want him to succeed!”. Romeo and Juliet starring real-life couple Sheldon Elter and Kristi Hansen in 2005: “they’re each other’s saviours…. it isn’t love at first sight; it’s love at all costs. Sheldon and Kristi had that raw-ness.”

James MacDonald: King Lear, “my last show as artistic director, aside from being one of my favourite plays. An amazing story of family and friendship. We did it on the simple….” The Merry Wives of Windsor, with Ashley Wright’s Falstaff as a blustering Barrymore, and his coterie as Marx brothers….” Henry V.

Next up at 12thnight.ca: Marianne Copithorne and Dave Horak talk about the Freewill Shakespeare Festival productions they’re directing, Hamlet and A Comedy of Errors. Look for that post next.