The world’s a zany, baffling place: The Comedy of Errors in the park

At a crucial mistaken-identity moment in The Comedy of Errors — a transaction-gone-askew involving a goldsmith, a chain, and a wayward husband arranging delivery on pricey bling for someone not his wife — a magpie perched on the lighting grid looked down and screeched in amusement.

Was it the situation? The Coriolanus joke that made the bird crack up? That’s the thing about summer Shakespeare in the park: not only do you get impromptu stage effects as dusk gathers, you get laughtracks courtesy of the unpaid extras.

And so it was on the opening night of this year’s 30th anniversary edition of the Freewill Shakespeare Festival. Dave Horak’s funny, colour-drenched, carnival-esque production of The Comedy of Errors returns the company to the first show they ever did, three decades ago. Shakespeare’s earliest, shortest, most farcically manic comedy catapults an entire town — merchants, servants, husbands, courtesans, cops, passersby — into a state of red-alert confusion.

It’s the impromptu arrival of a man and his servant from Syracuse that lights the match. From that moment on, Ephesus is inhabited by two sets of identical twins — a pair of twin masters both named Antipholus and a pair of twin valets both named Dromio. And the proverbial identity crisis takes on exponential new dimensions of misunderstanding in every transaction, financial, legal, romantic, domestic. “Am I myself?” a character will ask himself at one point. And, really, who’s to say?

We’re on a cut-rate Hollywood backlot in Horak’s production, which explains the amusing tangle of music (Dave Clarke) and dance numbers which arrive onstage and wander off. The Comedy of Errors is, after all, a play all about non-sequiturs — the empirical kind, in a world where your senses are unreliable, evidence is contradictory, and belief is at a premium. Yup, Hollywood, the illusion factory. In the middle of Hawrelak Park, with real live nature looking particularly verdant I might add, an assistant wheels an a series of screens painted with fakey generic nature.

The opener is a Mack Sennett Keystone Kops chase, blithely gender-oblivious. In the sight gags that ensue, a glum Snow White and seven hilariously put-upon dwarves will dutifully troop onstage, try to rehearse One Day My Prince Will Come, and get hustled off. In the world of Shakespeare’s comedy, there’s neither  rhyme nor reason (and hey, that’s a line from the play).

Director Horak finds, and uses, nine or so entrances and exits in Jim Guedo’s cinderblock set, and even adds a free-standing locked door which the cast breezily reaches around, as required. Led by an inspired foursome of Antipholus-es and Dromios, the prevailing theatrical impulse is heightened physical comedy, farcical pratfalls and drubbings, high-style gestures, the extravagant B-grade poses, double-takes, and tableaux of an era gone by.

It’s a physicality intensified by the neon-hued costumes and complementary wigs devised by designer Megan Koshka, and fun to look at. Out of the corner of your eye, you might catch sight of two sisters, Adriana (Vanessa Sabourin) and Luciana (Gianna Vacirca), one in hair-to-toe teal and one in acid orange, strolling behind the stage, arm and arm, cartoon characters in a real-live park. Now, that’s the kind of layering that’s pure Comedy of Errors.

You’ll get to see mystification and exasperation defined in physical terms: meet the Antipholi. Kristi Hansen as Antipholus of Syracuse is a veritable question mark of a young master out on an adventure in a strange new world. Every exit is long legs first, impossibly horizontal. She’s a riot. And so is Belinda Cornish as the local, Antipholus of Ephesus, a more self-assured, venal, confident sort of cat, with a hint of swagger. And everything familiar in his world gets incomprehensible, a choleric vein in his personality is increasingly uncovered. 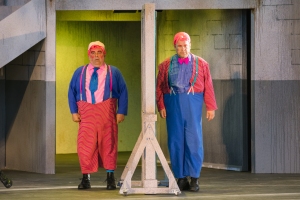 The Dromios, Robert Benz and Ashley Wright, are delightful as a pair of shrugging servants (with subtle differences between them) who are much more used to the unexplained vagaries of the world than their respective employers. That’s what it means to be an underling, after all, taking absurd orders, getting smacked for nothing. To Benz’s Dromio of Syracuse goes the most wistful line of the play, a reference to his status as an ass. “’Tis true,” he concedes. “She rides me, and I long for grass.”

As a Day-Glo farce, Horak’s production doesn’t have a lot of time and energy for either the Death Row sentence of the twins’ dad Egeon (Troy O’Donnell),  or the marital problems of  Adriana, who’s waiting for her wandering hubby to get home for dinner. It’s shamelessly unshaded that way. But Sabourin and Vacirca are both very funny.

The former, apparently on a short fuse anyway (which may be why her lips are teal), gets steamed to boiling point by the increasing confusion. She gives great tooth-gritting tantrum. The latter is trying to be a loyal sibling support group of one, but she’s compromised by her attraction to one of the Antipholi. Amber Borotsik has choreographed an amusingly tentative tango for them.

Naturally, when unhinged chaos has reached a kind of maximum escalation, there’s an appeal to religion. In a tiny role that points out the bench-strength of the company, Jesse Gervais is a show-stopper Dr. Pinch, a vampy drag show shaman.

You’ll see incredulity on legs down at the park. And right in the middle of a city with its share of more prosaic improbabilities (off the top of my head I’m thinking of the insane signage outside Hawrelak Park), there’s fun, and catharsis in that. The world is baffling: sit back and savour the fun.

The Comedy of Errors

Tickets: freewillshakespeare.com or at the gate