When worlds collide: Chris Bullough is feeling the reverb in his new Rig Pig Fantasia. A Fringe preview

“ Here I am,” sighs Chris Bullough wincing slightly over his de-caf last week. “An artist. My artistic career funded by oil. Questioning the ethics of oil production and use.”

His new play Rig Pig Fantasia, which premieres Friday at the Fringe in a Wishbone Theatre production, is fuelled (so to speak) by that kind of tension. And Bullough is feeling it; even his mop of red hair seems slightly askew. “I feel the hypocrisy of it as I drive around.”

Being conflicted  (and the spirit of full-disclosure) seem built into the Bullough talent. It’s given Edmonton audiences an array of boldly original performances (Richard III for one), and an assortment of new plays and experimental creations (Or The Whale among others) since he graduated from the U of A, first  as an actor, then a director, then a co-founder of a theatre company, Wishbone, with fellow actor/director Michael Peng.

For one thing, Fort McMurray is Bullough’s home turf; that’s where he grew up, until he came to the big city to study theatre. “I feel such a love, a loyalty, to that community,” says Bullough of a place embedded into the boreal forest that was attacked by the terrible fire of 2016. “I’m both haunted and fascinated by that ancient forest; I’d flip into it on my bike on my way home from school….”

His parents arrived with five-year-old Bullough and his little brother from Thunder Bay, “driven by the downturn of the late 70s early 80s,” fully intending to return to Ontario to build a house. “And we never did.”

“It was an incredibly cosmopolitan and welcoming community,” he says of Fort McMurray. “People from all over the world orphaned by economic circumstances found themselves in that boreal world together…. And in a way, you could choose your family. With people there it was ‘what do you need?’”

The love of the arts? That’s where his was nurtured! “An incredible community theatre…. My drama teacher is still a mentor to this day!”

“And all this nature! In the springtime people would gather to watch the river ice break up, an incredible thing. The northern lights. And the boreal forest in the middle of it all, so dark, dense, mysterious….” Fort McMurray was “a fort in the woods.”

Those ideas found their way into Bullough’s experimental Or The Whale, an imaginative fantasia inspired by Melville’s Moby-Dick which premiered at Studio Theatre in 2016 — a rare collaboration between the U of A drama department and an indie theatre.

Bullough and his Wishbone partner Peng (who’s in Rig Pig Fantasia, along with Dave Horak, Laura Raboud, Michael Anderson, DJ Creeasian) lit on a connection “between the whale oil of New England and the oil we take from the ground.”

“We tried to splice them together,” says Bullough. He grins. In the end, he thinks, their ingenious allegory had to cede to the power of Moby-Dick’s universal story: the  human quest for meaning in the face of our mysterious existence and death.

Or The Whale “was the spiritual awakening of Rig Pig Fantasia!” declares Bullough, who came at acting via improv, sketch comedy, and clowning. One of his characters “discovers in himself a latent love of dance,” a sort of grown-up Fort McMurray Billy Elliott. “He’s buried it, though. He’d taken lessons as a kid but only because it was good for hockey.”

Then “he falls for an artist,” one who believes in art as an agent for social justice, and everything changes. “She opens a world to him. And he starts trying to bring two worlds together. Are they oil and water? That’s the question.” 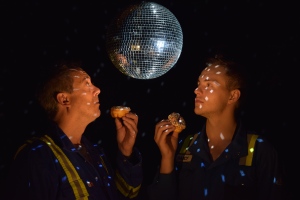 “Industry vs. environment: why can’t we just come together and figure it out? If we’re the intelligent hard-working creative people we claim to be, we should be able to…. But it’s a chasm,” sighs Bullough. “How do we change in ways that don’t polarize us? I’m wrestling with it, and my own hypocrisy, even as I’m putting on this play!”

“It’s so incredibly loaded! Anything that seems to threaten my ability to take care of myself and my family, well…. But we all know we need to stop using fossil fuel. We do. We know it though we desperately want to believe otherwise, that we’re not responsible for global warming.. When you have kids and you see environmental regulations being dismantled ….” He trails off.

“The Fringe is a good place to explore this, to start a conversation about how to move forward,” thinks Bullough, who seems to be an explorer by temperament (his next project, already in progress, is a collaboration with an alternative magician). “I’m trying to let the piece be what it wants to be, to let the characters come alive and own it.”

He quotes fellow theatre artist Ron Pederson, who said to the crowd on Sterling night in June as he accepted an award that “in theatre we’re in the transportation industry!” Says Bullough, “I loved that! Exactly! Taking people on a journey!”

What theatre teaches is “the silent power of an image…. The forest, that sky, those stars!”