Have you heard the one about… Punch Up, a FRINGE REVIEW

Evan Hall and Perry Gratton in Punch Up. Photo supplied.

Punch Up is a classic joke set-up on legs. SO … The Most Pathetic Guy Ever kidnaps The Funniest Man Alive, so he can learn to make The Saddest Girl in the World Laugh.

The stakes are high. Life and death, actually. If the Most Pathetic Guy Ever (Perry Gratton) can’t get The Saddest Girl in the World (Merran Carr-Wiggin) to laugh, she will commit suicide. And he’ll have to help her do it, even though he’s fallen in love with her at first sight. That’s the deal.

And here’s the catch. The Most Pathetic Guy Ever, Duncan (Perry Gratton), a die-hard comedy nerd, is supremely unfunny. The simplest knock-knock joke is beyond his grasp.

Duncan’s hostage, his second-favourite comedian Pat (Evan Hall), has his work cut out for him. Pat himself has lost his funny when his wife, the other half of his comedy act, dumped him and took his best jokes. And being chained to a typewriter in Duncan’s “super secret hideaway” has not lifted Pat’s spirits.

By the Canadian playwright Kat Sandler and smartly directed by Braydon Dowler-Coltman, Punch Up is a funny comedy about comedy, about what’s funny and what’s not. What’s always been funny, historically? Is it still funny if you screw up the delivery? It’s a whirlwind catalogue of the classics — whoopee cushions, pratfalls, pies-in-the-face, Abbott & Costello, Mel Brooks, the Seinfeldian anecdote…. 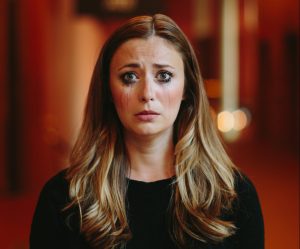 The comedy of tragic excess is the Saddest Girl’s domain.  Brenda’s woe-filled biography is one personal tragedy after another, non-stop. And Pat and Duncan, the one exponentially exasperated and the other dimly eager and uncomprehending, are a classic two-man comedy act, of the vaudevillian stripe.

The actors, all-three, are excellent as characters trapped in a joke set-up. They bounce off each other at high-speed in Dowler-Coltman’s production, timed like a demented cuckoo clock and punched up to a farcical buzz-saw pace.