A century after its premiere, The Soldier’s Tale comes to the Fringe. A review 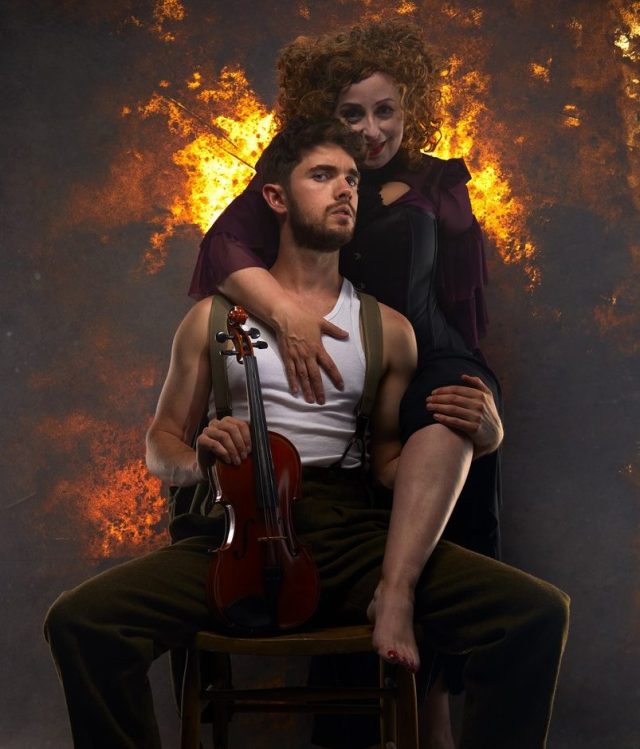 A Fringe Tale. A multi-disciplinary cross-section of talents — a symphony orchestra conductor, seven professional musicians, three actors, a dancer — gather on a a stage in a small make-shift theatre carved from a school to make something rare happen. For you. For 16 bucks (including surcharge).

So, The Soldier’s Tale. A collaboration between the Russian master Stravinsky and a Swiss writer C.F. Ramuz with a Russian folk tale to hand, it premiered in 1918 in the dying days of World War I. A century later Fringe audiences will be the first in Alberta ever to see it.

The Soldier (Oscar Derkx) is marching home after the war “marching marching all the day, soon he will be home to stay,” says The Narrator (Davina Stewart) in a jaunty rhyming text translated from French and tuned up for his forces by director Farren Timoteo.

“Will his journey never end?” Ah, there’s a folk tale question for you. En route Joseph meets the Devil (Andrea House), an alluring figure with come-hither eyes and a sexy French accent. She talks him into trading his cheap fiddle for a red book containing the secrets of unlimited post-war wealth (plus three days of bliss on a soft bed). And he agrees.

Bad choice, Joseph. It’s the start of a whole series of events, in which the Devil and man’s corrupting venality figure prominently. For starters, Joseph finds that time has passed magically. And he is “a ghost among the living,” a tragic wandering figure with nothing, not even his graceful, smiling beloved (the dancer Camille Ensminger, in lovely sequences choreographed by Laura Krewski). “What can I do to be what I used to be?”

The score has a vivid, brightly jagged, modernist drive to it, as delivered by the crack ensemble conducted by Alexander Prior, the ESO’s charismatic chief conductor. And Timoteo synchronizes the play to the memorable music, in inventive ways. Stewart is a wry and not entirely unsympathetic narrator and annotator, declaring and then sliding into scenes. Derkx is just right as the soldier whose best intentions tend to dissolve in the heat of the moment, and cede to the prospect of gain. And House is magnetic as the Devil. Nothing really makes sense if the Devil isn’t alluring.