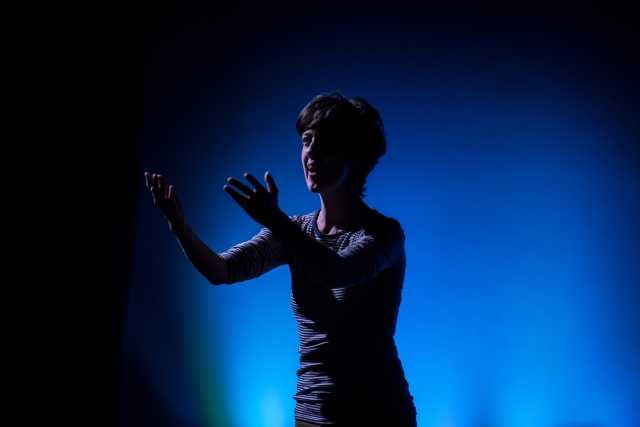 Multi-threat American heartland talent Erika Kate MacDonald is back on the circuit with another winning solo show. Sometimes when you hear “memory play” invoked (not that she does, directly), a deep inner cringe is un-tethered. Then there are other times, like this one….

Here we find a 17-year-old Erika travelling off to Indonesia as an exchange student in 1998. It’s a long way from her childhood home in New Hampshire, but this young woman is eager, so eager to drink up another culture and we get caught up in it.

From the din of the choked streets of Jakarta to her West Java adopted hometown and host family (including her host mum, “the Indonesian Fran Drescher”) we share her wide-eyed amazement. There’s a cloud of a mountain, an intriguing ferry trip, an early brush with the local insect world and ensuing research, Bollywood epics on TV, her Wednesday trips to the central market, and local status with a Canadian student pal as exotic “black/white.”

As you might imagine, there’s quite a bit more that will pique your interest, including the turn in Indonesian politics that eventually leads to our title – and a harrowing account at that.

As is the case of the best storytellers/monologists, MacDonald makes it all seem so easy and effortlessly conversational, which work of this caliber certainly isn’t. And like her partner Paul Strickland, whose wonderful and vastly different Fringe ’18 show Balls of Yarns MacDonald directed, she is an almost ridiculously sympathetic figure onstage. And well, offstage, too, as she welcomes each patron in.

My performance was packed. Get ‘em while you can. This is why we live for the Fringe.