Falling slowly for Once: a low-key musical fairy-tale opens the Citadel season. A review

Once, Citadel Theatre. Photo by Ian Jackson for Epic Photography.

“I pay you with music,” says the fairy godmother to the despondent troubadour in Once. And lo and behold, making music is the ultimate fairy elixir: it can transform you from half-dead to fully alive, and your world from stifling to infinite.

The title of the strangely low-key Tony Award-winning 2012 hit musical that launches the Citadel season is lifted from the opening line of every fairy tale. Once there was a sad Irish street musician who put down his guitar forever. At that very moment a Czech emigré appears before him with encouraging words about his song and talk of “destiny.” She unblocks his creativity; he unblocks her Hoover. They make sweet music together for a time, and other people join them to make music too.

And as for romance? We’ll return to that shortly.

Emily Dallas and Lawrence Libor in Once, Citadel Theatre. Photo by Ian Jackson for Epic Photography.

Since music is the premise and the talisman, Ann Hodges’ production has started before all that, at a Shoctor lobby bash with guest buskers nightly. And here’s magic: you can actually take a drink into the Shoctor theatre itself (as long as it’s in a spill-proof sippy cup) — an unprecedented liberty and step forward for mankind and theatre revenues. Heavens, you can take that cup even onto the stage, to join the cast who are having at some rousing Irish and Czech-flavoured numbers. However, since the production design isn’t an Irish pub, as in the original and Broadway touring productions, this seems a little contrived, in truth.

Anyhow, Once was fashioned from a captivatingly small 2006 indie film starring the couple who wrote the melancholy folk-rock songs (Glen Hansard and Markéta Irglová). And it finds its magic a long way from the exuberantly aspirational arcs of its achiever Broadway brethren.

If  Guy despairs that no one wants to listen to his songs of unrequited love and general depression, his worries were way off base. Once started small (at New York Theatre Workshop, like Hadestown), and, OK, it stayed small — even when it hit the big time. But eight Tony Awards later, it’s been touring and produced locally ever since, on both sides of the Atlantic. 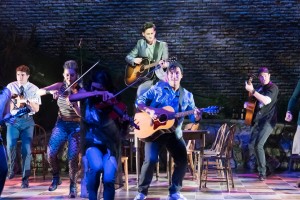 Once, Citadel Theatre. Photo by Ian Jackson for Epic Photography.

The characters are the musicians. And Hodges’ cast of 13 are impressively accomplished. They capture with easy zest and startling fluency the signature Once oddity that the making of music is the story. It’s also the tentative romance.

Guy (Lawrence Libor, a real find for Canadian theatre), the Dublin street musician who works in his Da’s vacuum cleaner repair shop, has hit the wall, dream-wise. His girlfriend is now his ‘ex, and she’s moved to New York.  Girl (EmilyDallas), the Czech immigrant, arrives mysteriously in his life trailing a little daughter (Alexa Zhang) a mother (Ruth Alexander), a bunch of boisterous ex-pat Czech pals, an unresolved marriage back home, and a Hoover that won’t suck.

That’s the set-up. From that Once unfolds in an apparently casual way with music that seems just to happen, and trail off, and start again somewhere else. Hodges’ stagecraft  creates the (hard-won) illusion of informality: ad hoc jam sessions, eruptions into dance (choreographed by Julie Tomaino) or stillness on a Dublin hilltop, impulse sing-alongs in bars (or the bank), snatched moments of filtering in and out of near-romance. Characters drift in an out of focus, inconclusively, and stay on the sidelines till someone needs a drummer, say.

And this kind of artfulness masquerading as the opposite is especially crucial since the set design isn’t the Irish bar of the premiere production (as required by the rights). Cory Vincennes’ design is abstract, a distressed brick-lined bare chamber, a low curved wall, a tiled floor that hints of interiors, an Emerald Isle hillside that hints of exteriors — in short, a neutral playground for music-making in a variety of locales.

The production owes much to the enchantment of Louise Guinand’s lighting. One captivating scene is a trip through the city in light and sound, place to place, wisp of melody here, fragment of tune there.

Libor, a recent arrival from the U.K. and a first-rate musician with a built-in rapport with his guitar, is absolutely convincing as Guy, the moody singer-songwriter who makes songs from heartbreak, regret, and disappointment. The character is forever being taken aback by oddball, and not necessarily welcome, arrivals in his life. Libor’s performance, always understated, captures in a natural way the reactions of a man trying to get his bearings on the spectrum of bemusement and incredulity as he’s roused from misery. Is he falling in love? Guy thinks he might be.

Dallas’s performance as Girl is less satisfying, but then the character doesn’t seem quite fully written. It does capture the amusingly disconcerting and brisk qualities of the mystery girl who’s a kind of can-do life coach to Guy. As in other Once productions I find that Girl’s epigrammatic sagacity as adviser is a little hard to take: “You cannot walk through life leaving unfinished love behind you.” Thank god for a morbid eastern European sense of humour. When Girl isn’t talking, though, the performance tends to slide into indistinctness.

But then there are colourful characters to take charge. Stephen Guy-McGrath is outstanding as Billy, the volatile but forlorn owner of a piano shop who retains an exemplary Irish capacity for outrage. Girl’s equally volatile Czech compatriots (including Oscar Derkx and Benjamin Camenzuli, both excellent) who instantly get into a fracas based entirely on their interpretation of a TV soap, are spirited.

Guy’s tongue-tied Da is conjured in seconds by Julien Arnold. Larissa Pohoreski and Ruth Alexander are the earthy, sensual side of music-making.

So is there a happily ever after to be spun from the open-ended “once” of the title? This is a musical that proposes that lives are fairy tales in progress. “We’ve still got time,” Guy and Girl sing in Falling Slowly, the Oscar-winning song that bookends the musical. “Raise your hopeful voice you have a choice….”

As for transformation, is it too late to run out and join a band (preferably in Ireland)?

Written by: Enda Walsh from the John Carney film, music by Glen Hansard and Markéta Irglová