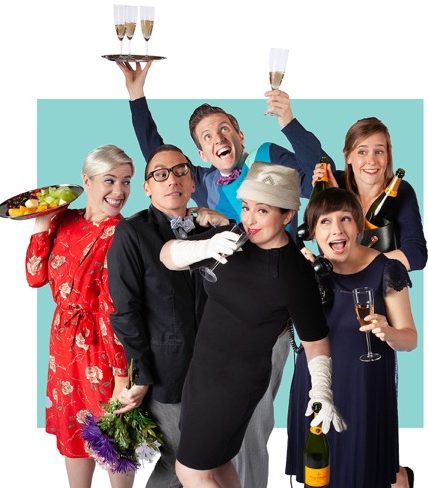 This is how the Teatro La Quindicina mind ticks: the last production of their 2018 season, Skirts On Fire, has just closed, ergo it’s the moment for a grand finale … of grand finales.

Bring Down The Curtain: An Evening Of Grand Finales, tonight only at the Varscona, is a song-and-dance extravaganza that gathers musical numbers, scenes, and speeches that bring down the curtain at the intermission or the show’s end.

Some are imprinted forever on your memory: Climb Every Mountain, the Act I close of The Sound of Music and Everything’s Coming Up Roses, which occupies the same thrilling position in Gypsy. Or Tom’s “I never went to the moon” speech at the end of The Glass Menagerie. Here’s a spot quiz: “I’m determined to do it — and nothing’s more determined than a cat on a tin roof — is there? Is there, baby?”

Jenny McKillop claims Maybe from Annie; Jason Hardwick straps on his tap shoes for  Anything Goes from that effervescent musical. Rachel Bowron does a a mash-up of “parade” songs: Don’t Rain On My Parade and Before The Parade Passes By. Kendra Connor sings Dear Friend from She Loves Me.

You can expect to hear the grand finale speeches from the Teatro shows this past season, as well as finales from some of Stewart Lemoine’s earlier work, like What Gives? from the pocket musical of that name, and the lovely concluding speech from The Margin of the Sky. “The sun sinks down to the margin and it exits the sky. In time, it approaches the other margin and it gets back in. I want to do that too….”

Yes, there will be Sondheim.

The evening at the Varscona (10329 83 Ave.) is hosted by Teatro artistic director Jeff Haslam. Cathy Derkach and Steven Greenfield are at the piano. And the cast includes the company of Skirts on Fire, with an array of Teatro stars including Andrea House and Sheri Somerville. Tickets: teatroq.com.

•A new play by Collin Doyle! Tonight’s Script Salon is your first glimpse at The Takeoff, by the award-winning author of The Mighty Carlins, Let The Light Of Day Through, and Terry and the Dog. The Takeoff follows three generations of one family  — “the couplings and un-couplins of new love, old love, and broken love.”

And there’s more: Tuesday night at the Almanac (7 p.m., 10351 Whyte Ave.) the playwright celebrates the launch of his volume of plays. The Mighty Carlins And Other Plays includes that title work, a raucous black comedy of family dysfunction and chronic underachievement. It’s a reunion between a father and his two grown-up sons on the anniversary of their mother’s death.

In Let The Light of Day Through, which premiered at Theatre Network in 2013, a couple in their thirties, in order to survive a great tragedy, have invented a comedy for themselves to be in, and characters to play.  The hero of Routes, originally commissioned by Concrete Theatre, is a 15-year-old kid who escapes the violence of his home life by riding the bus nightly through a dark and dangerous Edmonton suburb. All three reveal Doyle’s uncanny way with dialogue, and his expertise in marrying dark comedy and tragedy.

Edmonton actors, including John Wright, James Hamilton, Jeff Page, Jesse Gervais, Beth Graham and Doyle himself (most recently seen in a Fringe production of The Zoo Story) , will do readings from the plays. And you can pick up a copy.