The fear of flying, and the return of Dead Centre of Town 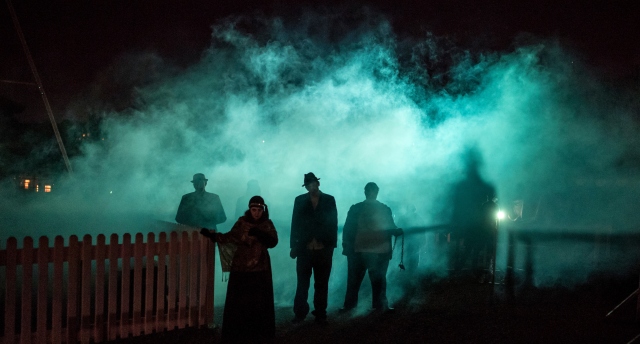 Ladies and gentlemen, we will be boarding tonight by zone. The dead centre zone.

For 11 years now, Catch the Keys Productions has been leading us on nocturnal Halloween expeditions into the macabre, digging in the boneyard where the gruesome secrets of our civic history lie mouldering and our ghosts refuse to stay buried. This year’s edition of Dead Centre of Town, opening tonight at Fort Edmonton Park, takes us into the vast and eerie Blatchford Field Air Hangar, a replica of the 1929 original originally built by Wop May, the World War I flying ace and star aviator.

Start fearful, and prepare to be horrified. Playwright Megan Dart, whose researches into Edmonton history are the basis of her original scripts for Catch the Keys’ immersive chillers, has discovered macabre stories of landings gone wrong, mid-air collisions, doomed aerial manhunts, flights into destruction. “Acts of God, man vs. nature, the elements, failed mechanics,” says Dart. “Fear that is out of our control.…” Fun fact (Not): “I learned you shouldn’t fly in February. A vast proportion of accidents happen then.”

Suffice it to say that the assumption we can, at will, fly through the air with the greatest of ease, has a lot to answer for in Edmonton aviation history.

Dead Centre Of Town is a name lifted from the grisly local lingo of yore for the intersection of Jasper Avenue and 109th St. One of Edmonton’s first mortuaries had stood there,surrounded by coffin shops and embalming emporia. It was where bodies of soldiers arrived by train and got dropped off during the last century’s wars. Eleven years ago it was a night club, and Catch the Keys’ Dart sisters, playwright Megan and director Beth, specialists in immersive theatre events in found spaces, lived nearby.

That’s where the debut Dead Centre Of Town happened, a one-night stand. And the rest is history — bigger and bigger shows and longer runs on location of Edmonton sites like the former tinsmith shop that turned theatre before it turned into the late lamented ARTery performance venue. Or the ex-cinema that became the Avenue Theatre. Or the first train station on the south side of town.

For the last five years Dead Centre Of Town has taken us down by the river to Fort Edmonton, where fog hangs in the air of an autumn night. We followed ghosts along 1885 Street, into historic saloons or school rooms. Last year, it was the spooky 1920 Johnny K. Jones Midway.

And now, the air hangar. “We’re so thrilled,” says Megan Dart. “It’s been on our wish list since we moved down to the Fort!” The space comes with its own “wildly different challenges,” to be sure, “a big old open warehouse that we fill imaginatively, our biggest build we’ve ever undertaken.” But there’s this: it’s indoors. And after a year of unpredictable interference from the elements, including wind storms gusting to 200 K and snow on Halloween, “we had to cancel two shows for the first time ever,” indoors is a felicitous concept.

The team, 13 strong and the same size as the cast, has scrounged from the Aviation Museum. “We have the fuselage of an old plane. We have wings and propellors…. We’re the Franksteins of aviation,” Dart laughs.

“We’re playing with space in a major way,” says Dart of the production concept: “a labyrinthine airport terminal,” with lighting (or lack thereof) designed by Beth Dart and Chris Dela Cruz. “There are engineers on the team,” she says. “And a mathematician to help us figure out how to move the audience.”

All us travellers into darkness will get a boarding pass, and with four flights to choose from. “The audience can choose what order to see them in.” 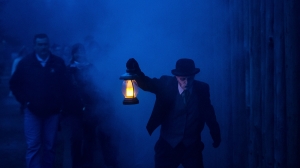 As for the stories, “we explore the period 1929 to 1985,” the latter bookend unusually recent by Dead Centre Of Town‘s historical standards. That, incidentally, was the year that “two Hercules transports collided mid-air, and all 10 crew members were killed, a bizarre fluke of an accident in a fly-over celebration. A very dark day in Edmonton’s aviation history.”

Dart discovered other morbid mysteries. Here’s one: “A military plane carrying unreported cargo vanished in 1943, mid-flight….” The crash site was found five years later. “But the military never confirmed or denied. There was no crash report, no manifesto,” only talk of a million dollars.

“Edmonton (owns) a lot of aviation firsts,” says Dart. “The first air harbour. A major hub during wartime, as the gateway to the North. During one day in World War II, a record number of planes, more than any other air field in Canada, landed and took off from here.”

And here’s the thing that frays the nerves: flying is always a matter of life and death.