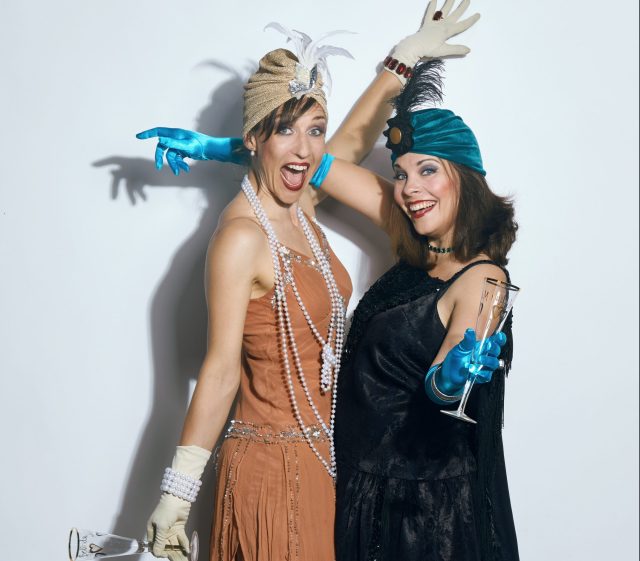 In the effervescent 1924 comedy that opens Thursday on the Varscona stage, you will see two married women, bored with contentment and longing for passion, restore the zing of excitement to their lives. They levitate into this thrilling new zone on a jet stream of  anticipation (of the arrival a lover they once had in common years before). Ah, and did I mention martinis, champagne, and Benedictine?

With Noel Coward’s Fallen Angels, Bright Young Things launches the second season of offerings from the trio of distinctive indie companies that make up the Varscona Theatre Ensemble. “I love Belinda Cornish’s choice of plays,” says VTE producer Jeff Haslam of the

artistic director of Bright Young Things, a company that specializes in the repertoire of the last century. “Such a probing spirit in those well-made plays…. They achieve a lot of the social contract artists have with audiences through dialogue! And that seduces you… You watch the action take place on the stage!”

“With Coward, you have to be great at the craft side of acting,” says Haslam. “The timing, the rhythm … are so tricky.”

Marianne Copithorne’s production, which runs through Dec. 2, stars Cornish and Vanessa Sabourin (co-artistic director of Azimuth Theatre and The Maggie Tree) as Julia and Jane. The all-star cast includes Mark Meer, John Ullyatt, Nathan Cuckow, with Rachel Bowron as the maid who, tellingly, might well be the smartest character in the play. Stay tuned for 12thnight.ca’s PREVIEW of the show. 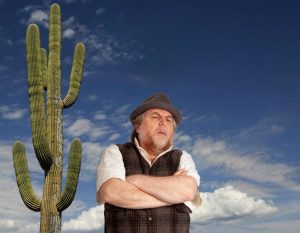 In February Julien Arnold’s Atlas Theatre brings a funny and warm-hearted buddy road trip play to the VTE season. Mesa, much-travelled on both sides of the Atlantic, is a 2000 piece by Calgary’s Doug Curtis in which we meet a 93-year-old snowbird and (as Haslam puts it) the “34-year-old liberal groover artist” (married to his granddaughter) who has agreed to drive him south.

Young Paul is all about “discovering the mythology of the Wild West, Tombstone, the ‘painted desert’,” Haslam laughs. Grandpa Bud is all about “Motel 6, getting there as fast as possible, and eating at Denny’s.”

“Paul needs to go on this journey, even though he doesn’t know it….”

Haslam (who “can’t stop crying when he reads it “even though it’s really really funny!”) has a particular affection for Mesa. And maybe it’s because he played Paul in in the 2001 Workshop West production. Bud was Ashley Wright, who was nearly the same age as Haslam. “He did it all in body language,” says Haslam in admiration.

He remembers the fun the cast had in the course of preparing the production. “We went to Denny’s all the time and ate burgers and called it research. We gave over to it — Denny’s without shame,” he laughs. 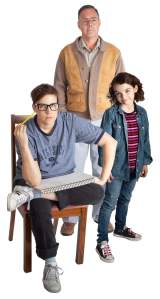 The finale of the VTE lineup is Kate Ryan’s Plain Jane Theatre production of Fun Home. The highly unusual Tony Award-winner by Lisa Kron and Jeanine Tesori, which moved to Broadway from Off- in 2015, is spun from Alison Bechdel’s 2006 graphic memoir of growing up with a closeted gay dad and discovering her own gay sexuality.

There’s darkness in the story, certainly. But as Haslam points out, “it’s so funny.” And there’s a certain unexpected lightness, or playfulness, of tone about it, maybe from its graphic provenance, muses Haslam. “Graphic … is an inch closer to the theatre; it’s visual; it’s theatrical. Alison is always saying ‘what’s my caption in this scene?’. It’s definitely not maudlin sentimentality, or another ‘award-winning subject matter’!”

Haslam himself plays the dad, “a complex and interesting character,” in Dave Horak’s production, April 11 to 20. Jocelyn Ahlf plays the adult Alison (there are three Alisons at different ages in the show), with the Janes’ artistic director Kate Ryan) as the mom.

Though the three VTE shows are very different in tone, they’re have theatrical pizzaz in common. And, as Haslam says, “they’re all versions of family.”

Tickets and subscriptions are available at Varscona Theatre Ensemble.